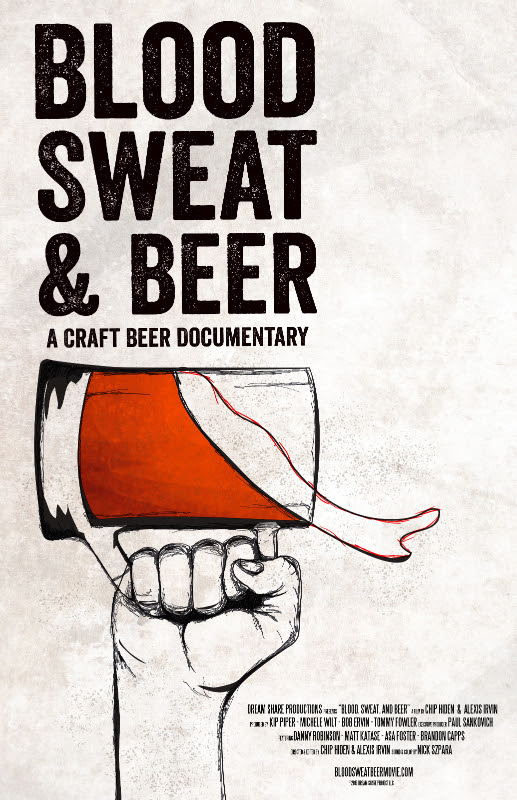 As the craft beer scene continues to gain momentum the business side of things will become much more prominent. We see this more and more as brewery ownership changes and with more craft breweries entering the marketplace things will shake out. This aspect of the brewing industry was a theme in Anat Baron’s movie Beer Wars that was released in 2009. Now over 6 years later there’s another intriguing movie that follows a similar theme, Blood, Sweat, & Beer – A Craft Beer Documentary.

Blood, Sweat, & Beer is a film that was released this past Friday via many various online streaming services and will soon make its way onto DVD. This is the second film from Chip Hiden and Alexis Irvin as the duo’s first was the 2013 documentary, The Dream Share Project. Their new film, Blood, Sweat, & Beer is a must view for any serious fan of craft beer. Hiden and Irvin produced a well thought out film that follows two different breweries through two very different struggles that face each business.

One brewery, Shorebilly Brewing Co. and its owner Danny Robinson dealt with a hefty and aggressive trademark lawsuit from a t-shirt company that produces a shirt with the same name as his brewery. Robinson states, “Legal fees alone are enough to put us out of business. They know I don’t have half a million dollars.” Even before the lawsuit comes to a conclusion, Robinson changes the name of his Ocean City, Maryland boardwalk brewery to Backshore Brewing. Then comes the verdict but you’ll need to watch the film to find this ending out.

The other brewery, The Brew Gentlemen Beer Co. is a new startup from two college buddies Matt Katase and Asa Foster. Graduates of Carnegie Mellon University these two decided at the age of 23 to open a brewery outside of their college town of Pittsburgh, Pennsylvania. The town chosen is the former steel town of Braddock, PA. Mind you that this town saw a drop in population from 20K to 2K as the steel mills shut down. As a result 38% of the town’s homes are abandoned and have sold for as little as $2K. Who would think of building a brewery with this set of economic conditions? This is when Braddock mayor John Fetterman stepped in to offer an amazing deal on a downtown space for the brewery along with a low price place to live. Since both Katase and Foster did not know much about brewing the pair recruited a young brewer by the name of Brandon Capps that had just completed a brewing internship at Anheuser Busch. Capps was willing to work for a very low wage and joined Katase and Foster to complete the build out on a brand new brewery and taproom in a town that was in desperate need of a boost.

Beyond these two featured breweries Hiden and Irvin also dive into some of the business aspects of craft brewing. The two travel to Boulder, Colorado to visit the Brewers Association and interview Julia Herz. Here Herz elaborates on some of the stats of craft beer from just two years ago when there were around 2,700 breweries. Now there are close to 4,000 breweries just a few years later. The industry is definitely changing quite rapidly.

The filmmakers also spend some time on some industry insight that is closer to home for us here in the Pacific Northwest. During a brief synopsis of how the big breweries are taking market share and becoming integrated in some of craft brewing’s most popular breweries. The two inform their audience of Anheuser Busch’s 32% stake in Widmer, Redhook and Kona as entities within the parent organization of Craft Brew Alliance. As a result some of the money craft beer drinkers are spending does go back to these larger brewers.

We had the opportunity to conduct an interview with one of the filmmakers, Chip Hiden. Here’s our discussion.

How did the two of you decide to make Blood, Sweat, and Beer?

A: We LOVE beer! During our travels with our first film, The Dream Share Project, we noticed a craft beer revolution brewing up in towns and cities all across the country. We started taking brewery tours and meeting the people behind the pint and hearing about how much passion they pour into their work. In April 2013, we decided to start filming a documentary about the industry and two startups.

Have you or Alexis made any other films that viewers should be aware of?

A: Our first film The Dream Share Project explores how successful people discover and pursue their dream jobs. We filmed with an Astronaut, an Olympic Skier, the founder of SXSW, and dozens of entrepreneurs, activists, artists, writers, inventors, and other cool people. One awesome interview was with Kirk Coco, founder of NOLA Brewing – our first brewery interview.

How long did the Blood, Sweat, and Beer filming take place?

A: Filming took place over 2 years. We started in April 2013 and had most of it done by the end of 2014. However, the movie didn’t have an ending for a long time. One of the breweries we followed was involved in a trademark lawsuit and the verdict was delayed by 6 months. We had no ending until 1 week before the movie’s world premiere at the DC Indie Film Festival. Once the verdict came in, we filmed it, stayed up all night editing, and cut the ending into the film, just before the deadline for the premiere.

You featured two breweries in the film, how did you decide on those two?

A: We started with a general idea of making a craft beer documentary, but we realized after 6 months or so that we needed some personal stories to add some heart and some stakes into the movie. We wanted to find stories about passionate people risking everything to chase their dream, where the viewer wouldn’t be sure if they were going to succeed or not. With that in mind, we decided to seek out start-ups. We we’re lucky to find great stories with Backshore Brewing Co. and The Brew Gentlemen Beer Co. We met Danny from Shorebilly / Backshore Brewing Co. when he opened his brewery in Ocean City, MD, but we had no idea that he would find himself in the middle of a trademark battle.

For the Brew Gentleman Beer Co., we met those guys at a Cicerone exam in Washington DC and were intrigued by how young they were – 22 years old at the time – the youngest professional brewers we had met. Once we drove into their town – Braddock, PA, we were instantly hooked by the visuals – it was a once-prosperous steel town that is now essentially a ghost town. Matt and Asa (co-founders of The Brew Gentlemen) told us about the history of the place and how they hoped to help revitalize the town. We knew we had a second story.

Will there be another beer based movie in the future?

A: In the future, Alexis and I are planning to film a 1 or 2 year later follow-up or epilogue with each of the breweries. It will probably be fairly short, not feature length. But we want to allow some time to pass to see where everybody winds up – how did Danny make out after the lawsuit? Did Braddock make a come back? We’ll have to wait and see. We have a deluxe version of the film available our website that will include the epilogue + a bunch of other cool bonus videos, short films, and a director/brewer commentary: https://bloodsweatbeermovie.vhx.tv/buy/special-edition-blood-sweat-and-beer

We may also look into pitching a beer TV show, maybe something like No Reservations or Diners, Drive-ins, Dives but for beer.

And what is your favorite beer?

A: Tough question….the first beer that blew my mind was Dogfish 90 Minute IPA, which I had fresh at the brewpub in Rehoboth Beach, DE, so I’m partial to that. However, I had a sip of The Bruery’s Black Tuesday at GABF last week at it was amazing. We filmed with Patrick Rue, the owner of The Bruery, and he gave us a bottle of Grey Monday that we are saving for some special occasion… maybe if Netflix or Hulu picks up the movie we’ll pop it.

At a good length of 71 minutes, Blood, Sweat, & Beer is a must see film for any fan of craft beer. Blood, Sweat, & Beer is currently available from an array of various online streaming services including Amazon Instant Video, Google Play, iTunes, Vudu and Xbox Video via FilmBuff. Prices range from $7.99 to $12.99 to purchase or from $3.99 or $4.99 to rent.