“Stevenson (Washington)-a quaint riverside drinking town with a windsurfing problem.” reads a sign inside the “Readers” bathroom at the Walking Man Brewpub.  The cozy little basement pub just north of the Columbia River on the Gorge is a not so hidden gem bustling with locals and travelers set out to taste some of the best beer in the Pacific Northwest.  Artfully decorated, the brewpub features an outdoor patio with scenic views of the Gorge’s rolling hills with the front of the establishment adorned with bine-ripened hops.  Inside, the walls are decorated with collectible server trays from years past as well as empty malt sacks and signage lining the back wall.  Random knickknacks are dispersed throughout and a large colorful chalkboard with the available beers on tap rests behind the handsome etched concrete and wood bar top.  Antique pull tab beer cans sit on the shelf above the chalkboard. The floors are also made of colored, etched concrete and the 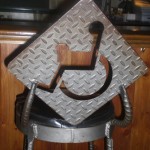 chairs feature the artisan welding of blacksmith Jim Caldwell.  The place is a little piece of beer lovers’ paradise and most definitely worth the trip down Washington State Route 14, between Vancouver and Hood River.

That all said about the atmosphere of Walking Man’s brewpub, the beers are worth the drive all by themselves.  Phenomenal podiatristicly nomened, award winning brews like the Black Cherry Stout, the Homo Erectus Imperial IPA, and the Foot Fetish Imperial Brown Ale are just a few of the beers raved about from Walking Man. 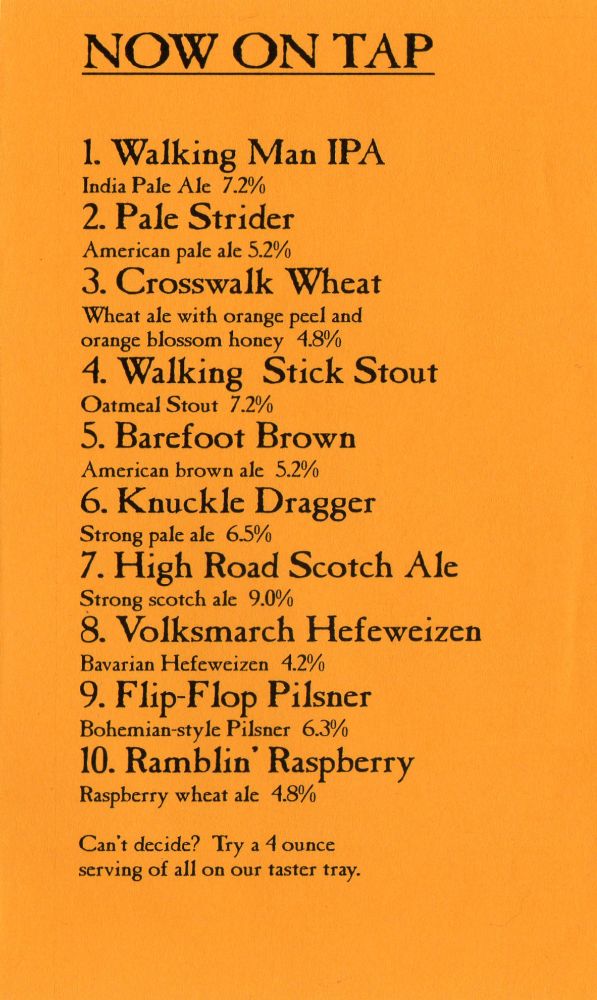 Here’s a look at a few of these wonderful beer that I tried over the weekend:

High Road Scotch Ale: A new batch of this beer was put on tap just before we arrived, and what a delightful offering it was. Served in a stemmed tulip snifter, this strong scotch ale (9% ABV) held a deep dark chestnut brown with tinges of amber around the edges.  A soft beige circular, wispy head sat atop releasing a mild nutty and sweet nose.  The flavor profile up front was sharp, sweet, mildly tart, and smoky.  As the beer warmed, it unveiled a creamy bold and boozy presence.  A very nice beer for the season.

Barefoot Brown Ale: Poured a medium to dark brown body with a moderate soft, cloudy off-white head.  Emitted a fruity, spicy, hoppy zest that shined through a caramel, toffee, and chocolate nose.  The recognition of this beers hoppiness became moe evident as more sips were enjoyed.  Medium bodied with a faint tart bite overrun by the sweet, lush maltiness, this beer is easily one of the best brown ales around. 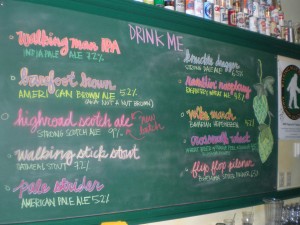 Volks March Bavarian Hefeweizen: This approachable summery wheat beer had a hazy yellow-copper body with a soft white spotted head.  A subtly spiced, banana-clove phenolic nose indicative of the style beckons any quaffer in need of quenching. Some acidic spritziness matched a chewy, crisp bubblegum and candied finish from the hops and yeast play.  This beer would have suited me better had it not been chilly outside, but it was still an excellent offering from Walking Man.

Flip Flop Pilsner: This beer doesn’t change its stance.  It is assertive.  A mildly ambered copper-bodied beer with a clinging, sticky whitish top, the bold Pils (6.3% ABV) is a profound spicily hopped take on the classic Bohemian style. The beer is almost imperialistic as far as Pilsners go, with a lingering skunky (in a good way), sharp charismatic mouthfeel.  Great yeasty muscle couples with a bitter, snappy hops finish with a sticky profile.  Not your typical Pils by any means, but still fitting the style.

Walking Stick Stout: An opaque, almost black bodied stout with hints of amber on the edges and a plush tan head.  Creamy oatmeal and sweet dark fruit in the nose prelude a chocolaty, robust flavor that warms and

welcomes the tastebuds. A bitter hops bite adjusts the sweet start and balances out this wonderful beer. Chalky, deep waves of flavor complexities shine in this beer that is a great choice for fireside rendezvous and pairings with chocolate chip oatmeal cookies or vanilla beans.

Well, there you have it, a look at some of the treats on tap at Walking Man.  I was feeling inspired by the list of beers and their creative names.  So, I came up with a few ideas for Walking Man names for fun.  If you are reading this, Walking Men and Women, feel free to use any of these. I’d be honored.

Shoegazer (maybe a porter or something dark)

Heaven’s Gait (there’s so much you could do with the word “gait” and maybe this one might bring to mind the thoughts of a certain cult who committed mass exodus, but it would be perhaps a good one for a monastary style brew)

Hot to Trot (a chili beer)

Take note:  Walking Man’s 8th Anniversary is happening November 19-23.  Check our calendar or Walking Man’s website for a list of these delectable treats. 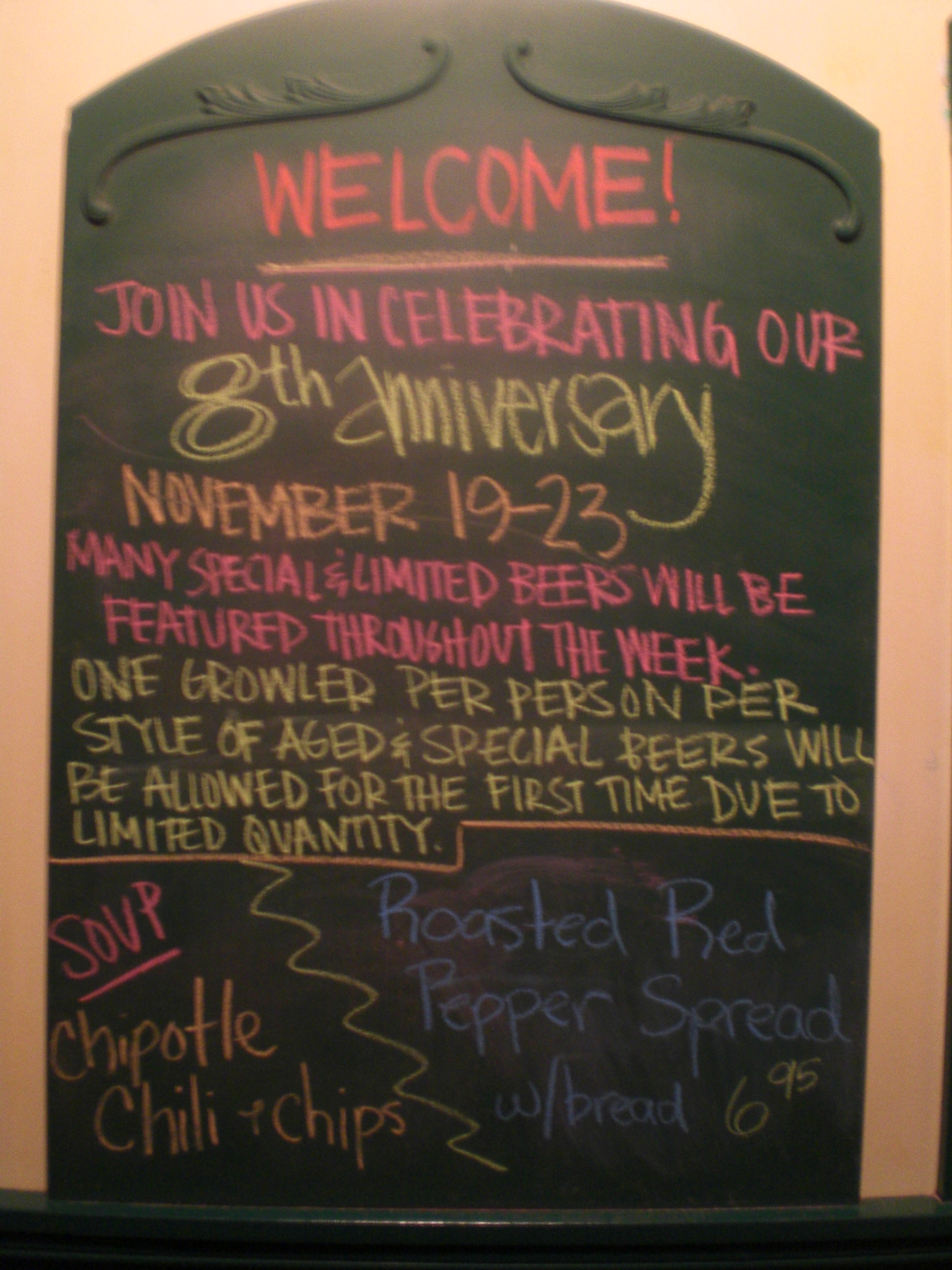