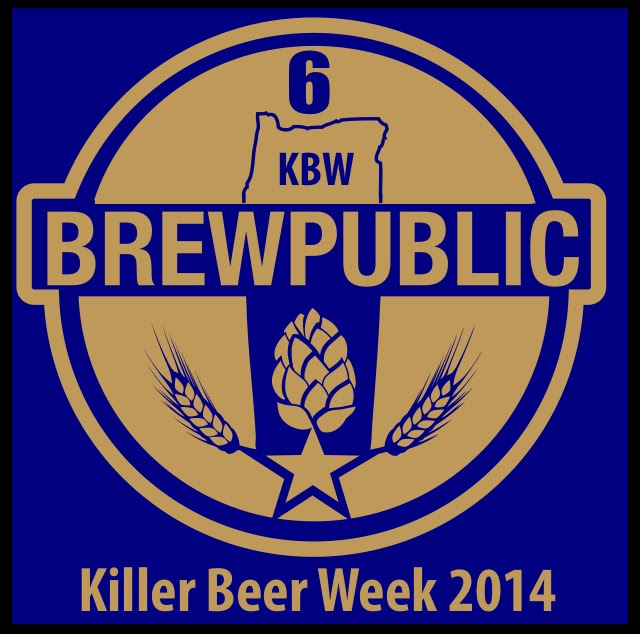 Brewpublic is ready to celebrate 6 years of bringing our great readers info on what’s happening in craft beer here in the Pacific Northwest and beyond. With this anniversary comes our annual KillerBeerWeek where we bring out some of the best beers that we can get our hands on.

Spanning ten days from October 17 – 26, and taking place at 11 of the top craft beer venues in the Portland, Oregon metro area, KillerBeerWeek returns with some of the year’s best and most sought-after beers from around Cascadia.

This year’s KBW is even more exciting with our first ever KillerBeerWeek beer that is being brewed by Old Town Brewing and Heathen Brewing.

“Killer Cologne” is brewed at Vancouver, Washington’s Heathen Brewing with lead brewer Rodney Stryker teaming up with Old Town’s Bolt Minister. Minster is celebrating his 2014 Silver Medal from the Great American Beer Festival and the 2014 World Beer Cup for his I’d Like to Buy The World a Kölsch in the German-Style Kölsch category. This is quite the accomplishment to win a silver in both prestigious competitions. His medal count also includes a Bronze Medal at this year’s World Beer Cup for Paulie’s Not Irish Red in the Irish-Style Red Ale category and in 2013 when they earned the Gold Medal at the Great American Beer Festival for Cent’s and Censability in the Fresh Hop Ale category. Upstart Heathen Brewing is making waves with their clean hoppy West Coast pales and IPAs. The “Killer Cologne” is a hybrid style dubbed a “Cascadian Kölsch-style ale” or “IPK (India Pale Kölsch).” This means it is a hopped up rendition of the easy drinking German-style lager-like ale. 6% ABV, 66.6 IBU. Look for this beer on tap at many events throughout KillerBeerWeek!

Here’s a look at what to expect for each of the 10 days during 2014’s KillerBeerWeek:

Killer Beer Summit
Friday, October 17 at Roscoe’s
2:00pm – Close
Roscoe’s has established itself as a premier destination for craft beer in the region with more than 20 rotating taps, great food, and a knowledgeable staff. Each month owners Jeremy Lewis and Quyen Ly organize fun and uniquely themed “summits” to celebration beer styles and seasonal varietals. Ranging from fresh hopped beers to winter warmers and German-style brews, every day carries a fest-like atmosphere at Roscoe’s and with this year’s KillerBeerWeek kick-off, you can be assured to find a little of everything for beer geeks of all sorts. IPAs, sour and wild ales, barrel-aged brews, imperials, refreshing lagers, you name it!
Roscoe’s
8105 SE Stark St.
Portland, OR

Killer Pumpkin Fest
Saturday, October 18 at Green Dragon
11:00am – Midnight
With a ridiculous number of taps in house, the Green Dragon Bistro & Pub sets up to host the 4th annual Killer Pumpkin Fest. This all-Pumpkin extravaganza is the biggest and best pumpkin beer tastival in the Portland area and one of the best in the world! With well over 25 pumpkin beers, the event will feature pumpkin foodie treats, pumpkin smashing, and the tapping of beers from giant pumpkins. And as you might expect, Elysian will bring along their vast selection of brews from their Pumpkin Roadshow. Look for special collaborative pumpkin brews, sour ales, hoppy pumpkin ales, dark, spicy, and other pumpkin styles! Pair your brews with a pumpkin menu or try a pumpkin cocktail instead. Bring the entire family for a fun-filled day.
Suggested donation of $5 at the door to benefit Camp Ukandu.
Green Dragon
928 SE 9th Ave
Portland, OR

Killer Washington Beer Day
Sunday, October 19 at Old Ivy Brewery & Taproom
Noon – 8:00pm
Vancouver, WA is just a stone’s throw across the river from North Portland, but what a different world it is. Literally, a “different state” when it comes to beer, The ‘Couve’s original hot spot for top notch craft beer is the Old Ivy Taproom, where great beer you won’t find in Oregon can be found. On this day, some unique kegs of Washington craft beer will be tapped for those who want a taste of the Evergreen State’s finest. Beers from Naked City, Fremont, Hilliards, Bale Breaker, Elysian, Walking Man, Lazy Boy, Amnesia, Loowit, Mt. Tabor, Heathen and a special house brew will be among many sought after specialties on this day!
Old Ivy Brewery & Taproom
108 W. Evergreen Blvd.
Vancouver, WA

Killer IPA Fest
Sunday, October 19 at N.W.I.P.A.
2:00 – 8:00pm
There are no India Pale Ales quite like those from the motherland. Here in Cascadia where we grow the most hops on the continent and some of the most unique and aromatic varieties on earth, one pub is set out to give hopheads a hearty dose of what us craft beer lovers direly desire. NWIPA is the spot! On this night, the second annual Killer IPA Fest, owner Jackson Wyatt and his team open the faucets of dankness and let citrusy, sticky, and straight-up palate-melting deliciousness flow. Look for specialty and limited release kegs from breweries such as Laurelwood, Boneyard, Barley Browns, 10 Barrel, GoodLife, and many more!
$10 entry fee for commemorative glass and five drink tickets. Additional drink tickets are only a $1.00 each.
N.W.I.P.A.
6350 SE Foster Rd.
Portland, OR

Foyston Fest
Tuesday, October 21 at The BeerMongers
5:00pm – Midnight
Our friend and mentor John Foyston started writing about beer for The Oregonian newspaper back in 1994. His blog The Beer Here is the main inspiration behind the inception of Brewpublic.com. Not only has John’s multifaceted writing work been such an inspiration to us, but we consider him one of our dearest friends and best drinking buddies. Come on out to the ‘Mongers and raise a glass to John. They will be featuring some of the man’s favorite classic brews on tap as well as some new faves and a collaborative fresh hop brew made with John and The BeerMongers at Portland U-Brew. (Look for the man of the hour around 5:00pm)
The BeerMongers
1125 SE Division St.
Portland, OR

Killer Belgian Fest
Wednesday, October 22 at Bazi Bierbrasserie
5:00 – 10:00pm
Bazi Bierbrasserie is Portland’s best spot for consistently locating a vast array of delectable Belgian and Belgian-style craft beer. Bazi is a wonderland for all things Belgian. Proprietor Hilda Stevens has worked tooth and nail with us to round up some of Oregon’s best offerings to fit the bill on this occasion. Look for rare treats and a few old favorites as well as some traditional standbys from across the Atlantic. Breweries featured on more than 15 taps will include (but certainly not limited) Upright, The Commons, Breakside, Agrarian Ales, Gigantic, Widmer, Fort George, Oakshire, Migration, Logsdon, and more!
Bazi Bierbrasserie
1522 SE 32nd Ave.
Portland, OR

Killer Bend Fest
Thursday, October 23 at Orenco Taphouse
4:00 – 11:00pm
After loading up the taps last year with Eugene and Corvallis beers for their first Killer Beer Week event, Orenco Taphouse of Hillsboro reloads with brews from one of Oregon’s best craft beer towns, Bend. You will find special brews from well-known outfits such as Deschutes, Cascade Lakes, 10 Barrel, SilverMoon and Worthy as well as some newer breweries like Rathole, Sunriver, Oblivion, and Riverbend. 20 Taps. Loaded up with Bend’s finest! Portlanders might want to conveniently take the Max train to this guaranteed to be awesome undertaking. Cheers!
Orenco Taphouse
1198 NE Orenco Station Pkwy
Hillsboro, OR

Brewpublic’s 6th Brewniversary Party
Friday, October 24  at Saraveza
5:00pm – Close
Join us for this intimate event as we toast to another year of keeping the dream alive with our favorite neighborhood pub, Saraveza. Taps will include some of Brewpublic’s favorite breweries’ best pours and perhaps some giveaways for the annual raffle. Come on out and have some fun!
Saraveza
1004 N. Killingsworth St.
Portland, OR

Killer Beer Fest
Saturday, October 25 at Bailey’s Taproom
Noon – Midnight
For the sixth consecutive year, Brewpublic has paired up with our friends at Bailey’s Taproom to rock the KillerBeerFest! 20 taps of the kind of beers that beer tickers. geeks, and all around lovers of one-offs look for. Granted, it is getting harder and harder each year with more and more events pushing into the craft brew landscape, but that is just a win for us all! If you love craft beer, come down to Bailey’s and find some stuff you won’t get anywhere else. Guaranteed to please!
Bailey’s Taproom
213 SW Broadway St.
Portland, OR

Killer Beer Week Recovery Brunch
Sunday, October 26 at The Hop & Vine
11:00am – 2:00pm
Beer curator Drew Worden has been working diligently with regional brewers to find some of the best brunch pairing brews to help you bounce back from this elongated week of mega-craft beer quaffing. Could you make all 10 previous events? Even if not, you still might need a little recovery to soak up the damage done. Look for brewers from Upright, Laurelwood, Oakshire, Three Creeks, Lompoc and more with some of their most unique and well-suited brews. For more details contact (503) 954-3322.
The Hop & Vine
1914 N Killingsworth St.
Portland, OR

Note: with these events are all 21+ (no minors admitted) with free entry (beer not included,). For further details, please contact each specific venue or email us at info@brewpublic.com. Times and details subject to change. However, radness levels only expected to increase.

We also have a bunch of new, limited run Brewpublic zip-up hoodies for sale this year. This new and very comfy hoodie offers a full zip-up front with the classic “BREWPUBLIC” logo on the front and our iconic “Hop Logo” on the rear, right shoulder. This brown hoodie is thick, yet very soft. We will have these available for sale during KillerBeerWeek for $45.00 each or you can contact us at info@brewpublic.com or reply to this post. Find us early as these hoodies are a very limited run.