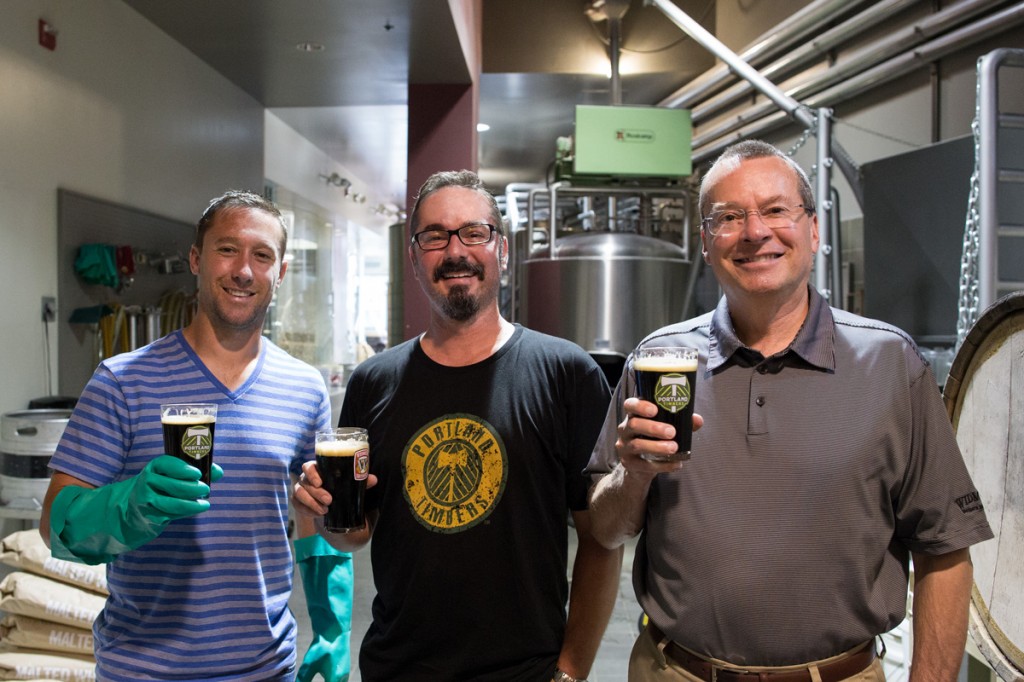 With the Portland Timbers in the MLS playoff hunt for the first time, there’s a new beer that has been brewed to honor first year head coach Caleb Porter. Widmer Brothers Brewing just announced the release of a new beer brewed in honor of Timbers Head Coach Caleb Porter. The beer is named Big Hearts and Brass Balls, A Caleb Porter. Coach Porter visited the brewhouse recently to help out on brew day for this beer.

The beer is a smooth porter brewed with roasted malts and naked oats, giving it a roasty, subtle chocolate character. The release came just in time for the huge Timbers vs. Sounders match on Sunday, October 13th. Look for this porter on draught at two stations in JELD-WEN Field at the Widmer Brothers Southern Front and outside the Timbers Army sections. Other Portland locations that will be pouring this small batch beer on Sunday include: Kingston Sports Bar & Grill, Kells Brew Pub, Cheerful Bullpen, Gigantic Brewing, The Thirsty Lion, and the Widmer Brothers Brewery and Pub.

PORTLAND, Ore. – October 9, 2013 – To celebrate a great first season for the head coach of the Portland Timbers, Widmer Brothers Brewing has brewed a special small batch beer with, and in honor of, coach Caleb Porter called Big Hearts and Brass Balls, A Caleb Porter.

As a founding partner of the Portland Timbers, the Widmer Brothers team has wanted to brew a Porter-style beer for Coach Porter since he joined the team earlier this year. Porter visited the Widmer Brothers pilot brewery at the Rose Garden in late August to help brew this special recipe: a smooth Porter brewed with roasted malts and naked oats that offers roast, subtle chocolate character, and a velvety mouthfeel. This highly drinkable beer is ready just in time for the heated Cascadia Cup rivalry match against the Seattle Sounders on Sunday, October 13, and for the MLS Cup Playoff push to close the 2013 regular season. 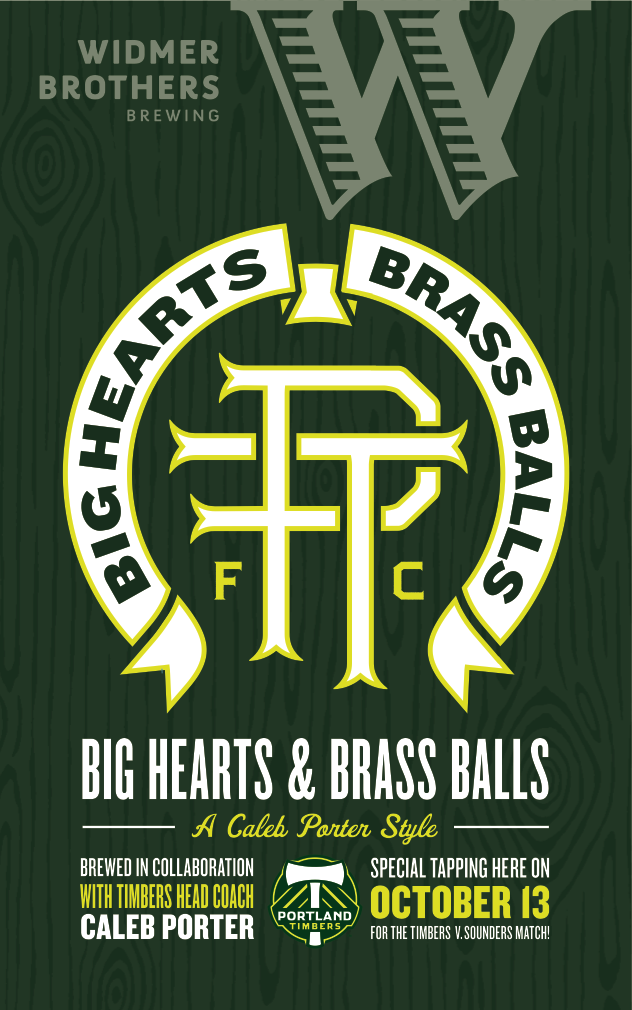 Widmer Brothers brewer and longtime Timbers fan Ben Dobler developed the recipe and was joined by Porter at the brewery to brew Big Hearts and Brass Balls, A Caleb Porter. “I’ve been a Portland Timbers fan for 38 years, and it was definitely a career highlight to have Caleb Porter brewing with me in the brewhouse,” said Dobler. “After the season the Timbers have had, we wanted to celebrate Coach Porter and the Timbers fans with a special beer that will be tapped for the crucial upcoming match against the Sounders. I hope this beer helps fuel the fans and club, and hope it helps bring 3 points to the Rose City.”

The name of the beer comes from a statement Porter made following the Timbers victory over FC Dallas in June “…they [the Timbers] continued to show me that they have big hearts and brass balls, because they know how to get it done when the game is on the line. That’s the mark of a good team.”
Big Hearts and Brass Balls, A Caleb Porter will be available in Portland for a limited time, in limited quantities. Starting Sunday, October 13, at 4:00 p.m. the beer will be on draught at two stations in JELD-WEN Field while supplies last: the Widmer Brothers Southern Front and outside the Timbers Army sections. Other Portland locations that will be pouring this small batch beer on Sunday include: Kingston Sports Bar & Grill, Kells Brew Pub, Cheerful Bullpen, Gigantic Brewing, The Thirsty Lion, and the Widmer Brothers Brewery and Pub. 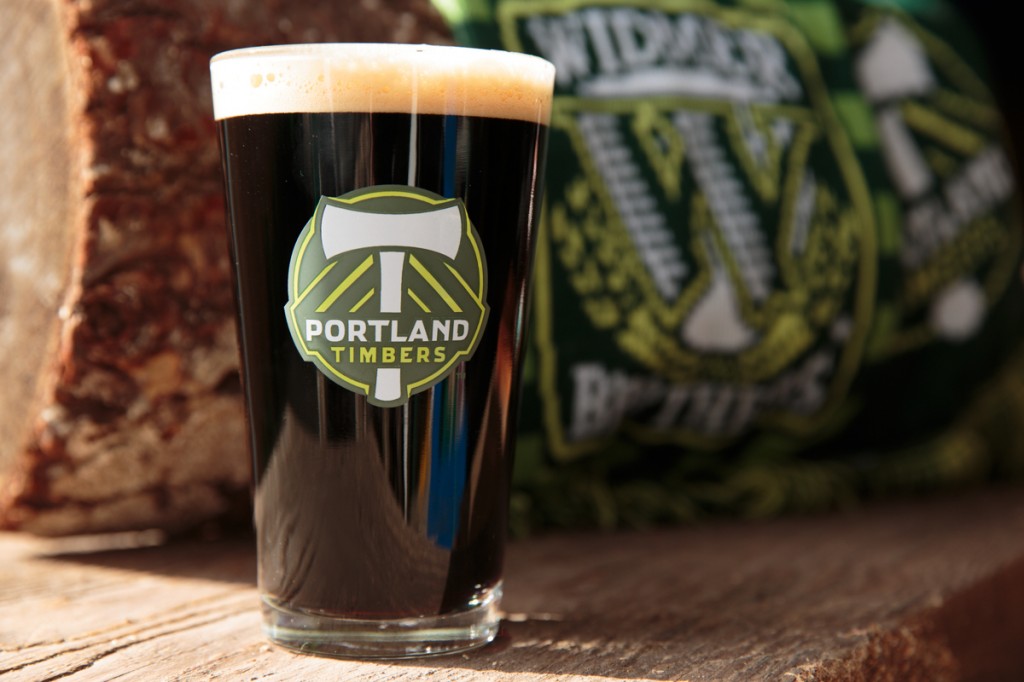 About Widmer Brothers Brewing
What started as a dream for two ordinary brothers who just loved beer has now become a reality for two ordinary brothers who still just love beer. Kurt and Rob Widmer helped lead the Pacific Northwest craft beer movement in 1984 when, in their 20s, they dreamed of brewing unique interpretations of traditional beer styles. In 1986, Widmer Brothers Brewing introduced the first American-style Hefeweizen; today, the unfiltered cloudy beer is the company’s signature brew and one of the best-selling wheat beers in the country. Based in Portland, Ore., the brewery currently brews a variety of beers including Alchemy Ale, the Rotator IPA series, Pitch Black IPA, Nelson Imperial IPA, a limited edition Brothers’ Reserve Series and a full seasonal lineup.

About Big Hearts and Brass Balls, A Caleb Porter
Big Hearts and Brass Balls, A Caleb Porter is a Porter-style beer brewed with and in honor of Portland Timbers head coach, Caleb Porter. It has a rich, malty aroma with notes of chocolate and roast malts. A velvety smooth mouthfeel is the result of using oats and English pale malt. The flavor is full of roast character contributed by three different high-kilned malts in perfect balance, without being bitter or astringent. A subtle, crisp hop finish makes this a highly drinkable porter for any soccer aficionado.