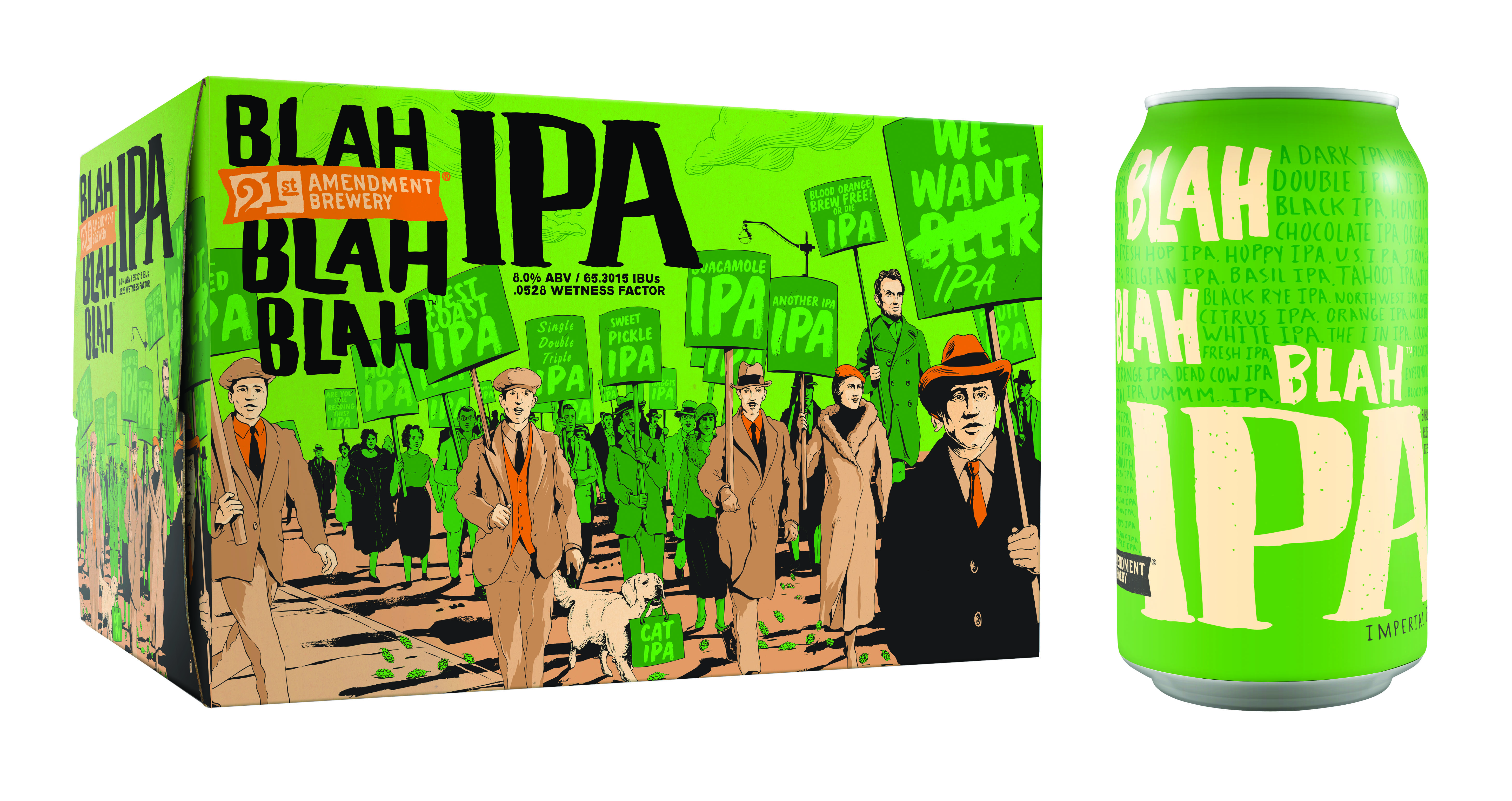 “It’s a tongue-in-cheek commentary on the popularity of the IPA style and all its sub-styles that have become part of craft beer conversations and offerings,” says Shaun O’Sullivan, co-founder of 21st Amendment Brewery. “We thought that Blah Blah Blah was a suitable name because it’s fun and playful. We really like the idea of someone heading to their favorite bar and asking for a Blah Blah Blah IPA.”

But don’t let its name fool you. Jam packed with Mosaic, Citra and the latest Idaho 7 hop, and at 2 pounds per barrel of dry-hops, there’s nothing blah about this IPA.

“Our version can stand alone,” says Nico Freccia, co-founder of 21st Amendment Brewery. “It’s a bit darker than our Brew Free! or Die IPA and has a rich character accompanied by the noteworthy elements associated with hop’s bitterness, flavor and aroma.”

Similar to many of 21st Amendment’s fan favorite brews, the beer started out as a homebrew. Many batches later the IPA found its way into 21st Amendment Brewery’s San Francisco 2nd Street brewpub and O’Sullivan and Freccia saw an opportunity to enhance the offering with one of their favorite malts, “Baird Crystal 70.”

“Baird Crystal 70 is the primary malt used and the nutty sweet character of this particular malt gives Blah Blah Blah a red hue while the addition of biscuit and dark Munich malts grant the brew a delicate toastiness,” adds O’Sullivan. “The bitterness is assertive, but balanced by a subtle sweetness—all part of the plan of course. Late in the boil we threw in a few aroma hops such as Centennial, Ahtanum, Amarillo and Mosaic which combined give the beer a more hop-quenching flavor than our current IPA lineup.”

To round out the beer, the team at 21st Amendment loaded the fermenter with aggressive dry hopping, using Citra, Chinook, Simcoe, Mosaic and a newer varietal Equinox. The result—a big hop aroma on top of a malty sweetness that makes Blah Blah Blah IPA not just any average IPA.

ABOUT 21ST AMENDMENT:
In 2000, Nico Freccia and Shaun O’Sullivan opened the doors to the 21st Amendment brewpub in San Francisco’s historic South Park neighborhood with Freccia managing the restaurant and O’Sullivan spearheading the brewing process. In addition to quickly becoming one of the city’s favorite pubs, 21st Amendment began expanding beyond the Bay Area by helping to pioneer the movement to canned craft beer. Known for their witty names and delicious brews, 21st Amendment offers year-round selections, as well as seasonal offerings and their infamous ‘Insurrection Series’, a once-in-a-while limited edition release. Sold in 25 states, 21st Amendment operates out of its new San Leandro brewery headquarters and is among the top 50 craft beer brewers in America.