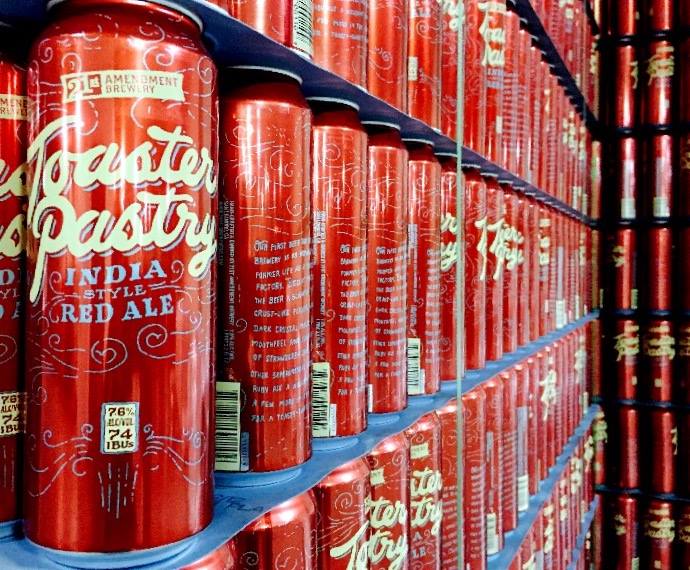 SAN FRANCISCO, Calif. (August 29, 2015) – Just months after opening their new 95,000 square foot state-of-the-art brewery in San Leandro, 21st Amendment co-founders Nico Freccia and Shaun O’Sullivan introduce their newest creation, Toaster Pastry, India-Style Red Ale. Toaster Pastry, in a new 19.2 ounce can, is Freccia and O’Sullivan’s creative nod to the former Kellogg Factory space that is 21st Amendment’s new home. The first time the world will be able to enjoy this new beer will be during the brewery’s Grand Opening Celebration party in San Leandro on August 29.

“We just thought it would be a great idea for the first beer out of our new brewery to pay homage to the Frosted Flakes and Pop Tarts that were once made in the same space decades ago,” stated Freccia. “One of the best parts of opening the new brewery means we’re not only able to bring our production home to the Bay Area, but we also finally have the space and opportunity to experiment with new beers, variety packs and new can sizes. Toaster Pastry is the first step of much more to come.” 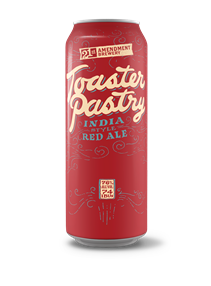 “Biscuit malts give the beer a slightly nutty, crust-like flavor, while pale and dark crystal malts offer the mouthfeel and flavors reminiscent of strawberry jam,” explains O’Sullivan. “Calypso and other experimental hops give this ruby ale a welcome bite with a fruity aroma. We can’t wait to finally share this new beer with consumers. It’s been a top-secret project that we’ve been working on for almost two years, and I think we perfected the flavor profile and packaging in a way that would make Kellogg proud.”

ABOUT 21st AMENDMENT:
In 2000, Nico Freccia and Shaun O’Sullivan opened the doors to the 21st Amendment brewpub in San Francisco’s historic South Park neighborhood with Freccia managing the restaurant and O’Sullivan spearheading the brewing process. In addition to quickly becoming one of the city’s favorite pubs, 21st Amendment began expanding beyond the Bay Area by helping to pioneer the movement to canned craft beer. Known for their witty names and delicious brews, 21st Amendment offers three year round selections, as well as seasonal offerings and their infamous ‘Insurrection Series’, a once-in-a-while limited edition release. Today, 21st Amendment is among the top 50 craft beer brewers in America and is sold in 24 states.