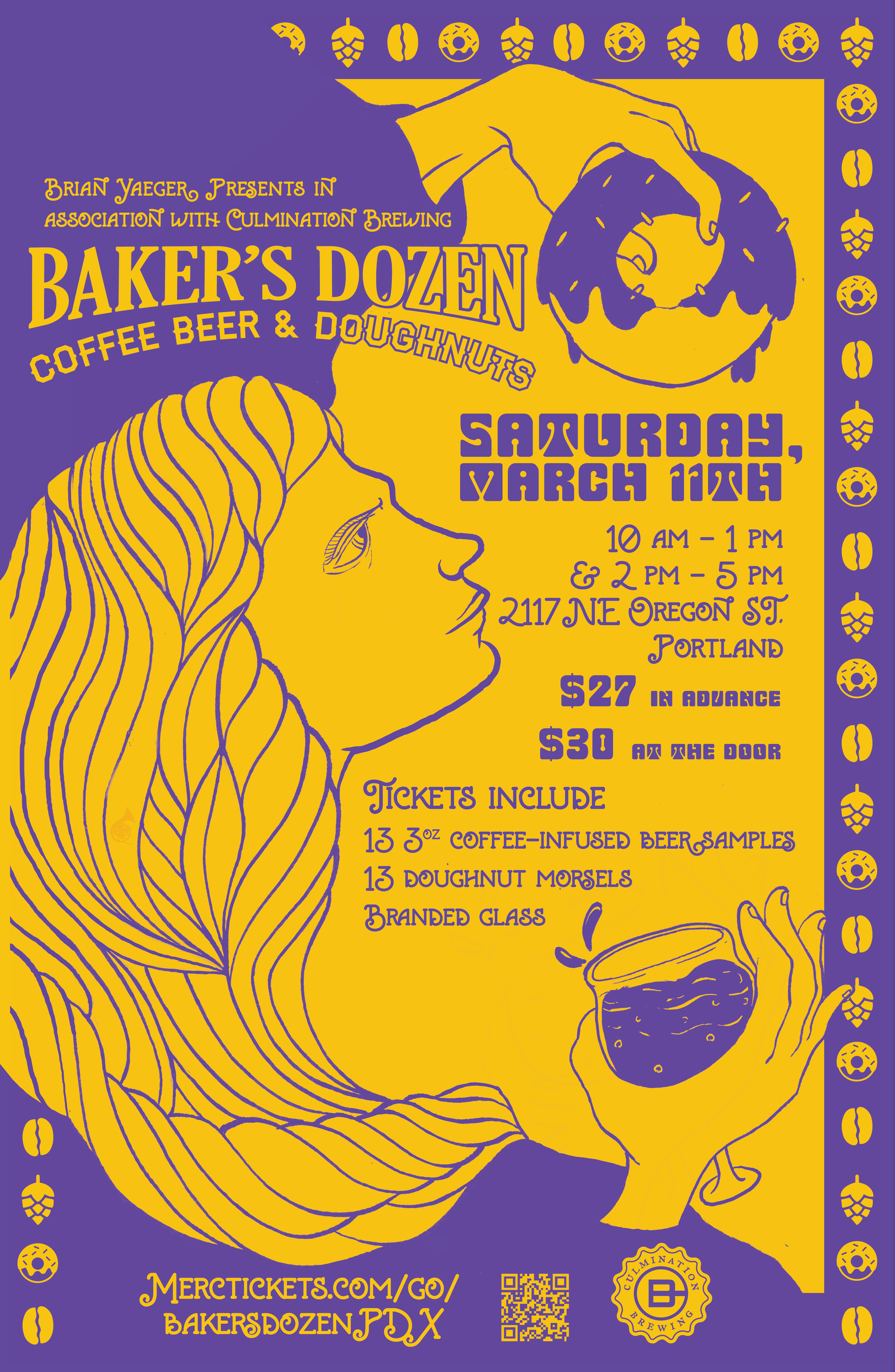 Beervana, OR, Jan. 18, 2016 – The Third Annual Baker’s Dozen is Portland’s, and the world’s, only coffee beer and doughnut festival. It features three things Portland does best: beer, coffee, and doughnuts. Portland is home to several dozen craft breweries and independent roasters so the marriage of the two made in hoppy, caffeinated heaven. Those results then pair sublimely with doughnuts. Mix’n’match; no single coffee beer is designed to complement any particular doughnut. The festival again takes place at Culmination Brewing Co. with assistance from neighbors Oregon Mead & Cider (2117 NE Oregon St.). New this year, the fest will occur over two sessions on Saturday, March 11, first from 10 a.m. to 1 p.m. and then from 2 p.m. until 5 p.m. Last year the event sold out in advance and tickets are limited to 700 (to ensure attendees can sample everything) and are available for $27 ($30 at the door if available) at Merctickets.com/go/BakersDozenPDX

Paid admission includes samples of every unique coffee-infused beer and delectable doughnut morsel (most will be quartered). Each beer incorporates a different local roaster’s beans. Brewers excel at experimenting with base styles on which to layer coffee notes over, ranging from traditional stouts and porters to cream ales, lagers, and in the case of co-host Oregon Mead & Cider, a honey mead. The nearly finished line-up this year features mostly Portland breweries: Culmination, Gigantic, Great Notion, Labrewatory, McMenamins, Montavilla (in collaboration with Bipartisan Café), and Tugboat. (This marks the first occasion ever where Tugboat’s beer will be available off-premise. It’s also the debut of Coffee Chernobyl, their celebrated 14% ABV double imperial stout.) Additionally, Block 15 from Corvallis will send the next rendition of Cosmic Cold Brew, “Double Ristretto,” San Diego’s Modern Times will have a beer made with house-roasted beans, and Georgetown from Seattle will pour their GABF 2016 gold medal winning Gusto Crema featuring Caffe Umbria coffee. Additional Portland roasters participating include Ole Latte, Clutch, Water Avenue, and Stumptown while McMenamins Coffee, like Modern Times, roasts their own.

As an all-ages event, a portion of the proceeds will go to Friends of the Children, Portland providing commitment assistance to at-risk youth. For folks needing savory protein, Culmination Kitchen executive chef CJ Mueller will have breakfast food available for sale and several of the roasters will provide complimentary joe.