When Hotel Eastlund opened last year in Portland’s Lloyd District it was accompanied by Altabira City Tavern, its very own restaurant. Located on the hotel’s sixth floor, Altabira is not your average hotel restaurant as it is owned and operated by acclaimed Pacific Northwest chef David Machado, , whom also operates Citizen Baker, also in Hotel Eastlund and Nel Centro in downtown Portland.

Offering picturesque views of the downtown Portland skyline, Altabira is fast becoming a top dinning destination in town. The restaurant serves regional American cuisine focused on updated classic dishes. It is also known for offering a curated taplist of 16 local craft beers along with a Northwest focused wine list and cocktails that will keep you coming back for more.

If the food and drinks weren’t enough to bring you in the scenic views definitely will. Altabira has one of the city’s most beautiful outdoor dining locations that allow patrons sweeping views of the Rose City. And when it rains part of the patio is covered and sitting inside does not disappoint as Altabira features windows that stretch from the floor to the ceiling.

Coming this fall during the months of September, October, and November, Chef Luis Escorcia will be showcasing his food and beer pairings for Altabira’s Fall Beer Dinners. At each dinner guests will enjoy a 4-course gastropub-style menu prepared by Chef Luis Escorcia, paired with craft beers from the featured brewery. When it comes to the featured monthly brewery, Altabira chose wisely with The Commons, pFriem Family Brewers and Worthy Brewing.

The Fall Beer Dinners will be held on the following dates. 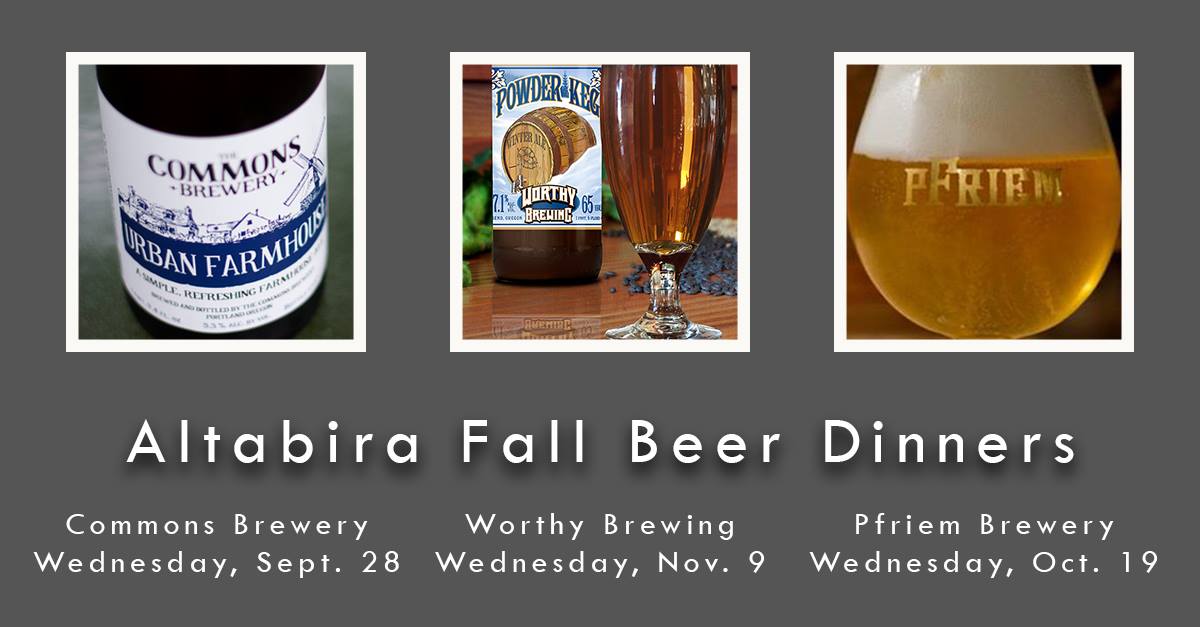 Reservations are now open for monthly dinners and may be made by calling the restaurant at (503) 963-3600.