Earlier this year a new brewery founded by Tomas and April Sluiter opened its doors in Northeast Portland at The Bindery Annex Building. This former book bindery has been converted to house many various businesses including a new meadery. Culmination Brewing is taking up the largest footprint of these businesses and is about to unveil its house brewed beers to the public this weekend for its Grand Opening Celebration on June 19-20 as part of PDX Beer Week.

When Culmination Brewing opened the brewery’s taproom, it had yet to receive city permission to begin brewing on its new 5 Vessel 5 Barrel Brewhouse manufactured by Marks Design & Metalworks. So in its place Culmination began serving various guest taps and two beers that were collaboration beers brewed elsewhere. The first one was 4 & 20 Imperial Black IPA that was brewed at Lucky Lab – Hawthorne and this was followed up with Reynard Belgian Style IPA brewed at Brannon’s Pub and Brewery in Beaverton. 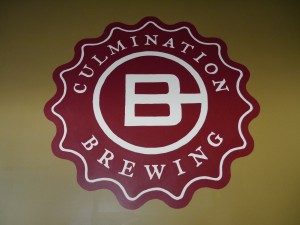 Since Tomas has a background in music, one idea that he had from the get go has come to fruition with the brewery’s Concert in the Brewery Series. The monthly live music showcase will allow the musicians to perform directly inside the brewery and will utilize the Culmination Back Bar. The next Concert in the Brewery will feature Maximum Charisma, featuring Brewpublican Matthew DiTullo on drums, with opener Alma Freer.

Now with the brewery in full production Culmination Brewing is set to host its official Grand Opening Celebration this coming weekend on June 19th and 20th. On Friday from 4:00 to 10:00pm and on Saturday from 11:00am to 10:00pm, Culmination Brewing will debut what they hope to be 8 to 10 new beer offerings all brewed on premise.

During this Grand Opening, Tomas will be conducting brewery tours of its innovative 5 vessel system on Friday, June 19th from 4:00 to 6:00pm and on Saturday, June 20th from Noon to 4:00pm. This will be a great opportunity to check out Culmination’s new brewhouse from Marks Design & Metalworks.

For those that arrive hungry, Culmination Brewing will be featuring a special Brewer’s Dinner prepared by its Executive Chef Carter B. Owen on Friday, June 19th beginning at 7:00pm. Tickets are $20 and are available online or will be available at the door. There will be three dining options, all with three different pours of Culmination beer that consist of the following.

Then to get your Saturday going, Owen will be serving up a brunch from 11:00am to 2:00pm. A small plates menu will follow this from 2:00 to 4:00pm. Then after 4:00pm Owen will have a special dinner entree made specifically for the Grand Opening.

Last week we were treated to some of the food that Owen has been making and were thoroughly impressed. On our visit we had some flavorful pulled pork sliders that were served alongside an amazing salad. Whatever sort of dressing that Owen used really enhanced the greens. This was a nice accompaniment to the tasty pulled pork sliders.

Now onto what really matters, the beers from Culmination. The brewery has an ambitious plan to off four different IPAs throughout the year. This includes a standard IPA, 4 & 20 Black IPA, Euphoric Brett IPA, and an Imperial IPA. Later this year their intent is to bottle a select variety of its beers and will get this to the market through self distribution.

Some of the beer offerings we tasted last week included five beers brewed at Culmination and the sixth one at Kells Brew Pub. Four of these six beer were finished beers and three were pouring in the taproom. These included Saison II, Sour Citrus, IPA 1 and its collaboration beer, Coffee Cream Ale, though this one was not pouring in the taproom. We also sampled Saison I and Belgian IPA that should be fully ready to go in the taproom for this weekend’s Grand Opening.

The two highlights were its IPA 1 that will be the first IPA in Culmination’s rotating IPA series. This IPA uses rye malts but if you’re no fan of rye beer fear not as the rye is not very prominent in the malt flavor. It’s less spice and much more forward on the citrusy flavors that are expected in an IPA. The other being Coffee Cream Ale, its collaboration beer brewed for the Baker’s Dozen Doughnut & Beer Fest back in April. This beer was brewed with Dave Fleming at Kells Brew Pub. Not too heavy and an excellent choice for a warm day.

An unexpected delight of the taplist at Culmination is the mead that is served from The Bindery Annex Building neighbor, Brooks Cooper of Stung Fermented. Cooper has produced Worker’s Standard that is a pleasant session mead made with wildflower that is not overtly sweet. At only 6.25% ABV this first batch was produced at Culmination while his build out was taking place. The company’s logo of DM&D is its clever abbreviation for Drink, Mate & Die.

Culmination Brewing Taproom and Kitchen is now open Tuesday through Thursday and Sunday from 4:00 – 9:00pm and Friday and Saturday from 4:00 – 10:00pm.