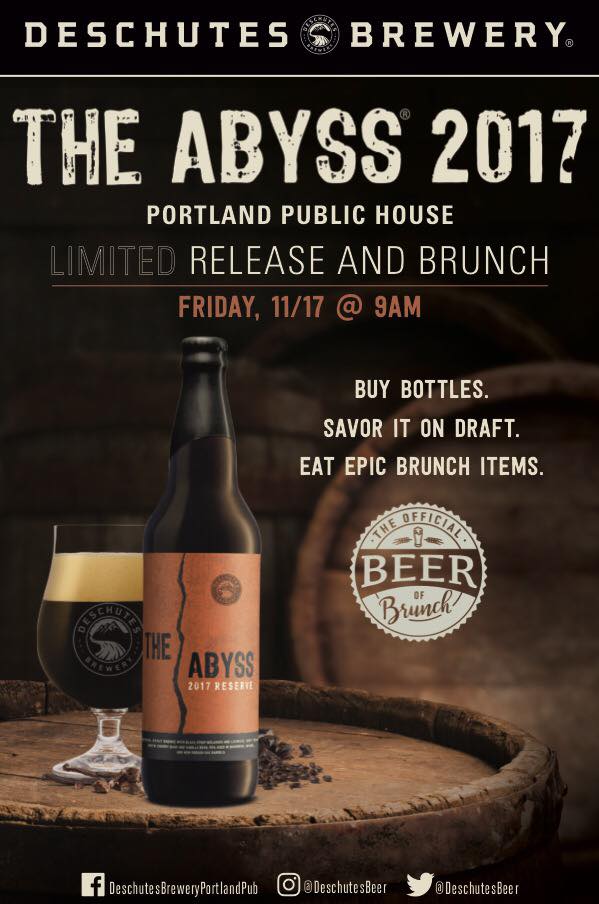 Prepare to take the morning off from work on Friday, November 17 when Deschutes Brewery Portland Public House returns with its 2017 The Abyss Release & Brunch. Taking place from 9:00am-2:00pm, Deschutes will release the 2017 version of The Abyss and will feature The Abyss Sample Tray with 6 vintages from 2012 through 2017.

The Abyss Description:
Perhaps one of the most lauded beers in Deschutes Brewery’s rich lineup, The Abyss is beloved by many for its immeasurable depth and complexity. Hints of molasses, licorice and other alluring flavors make it something not just to quaff, but contemplate. This year, in addition to the Imperial Stout that fans have come to love, Deschutes’ brewers mixed it up and added two more limited edition versions of the beer. One is 100% barrel aged in tequila barrels and the other 100% aged in rum barrels. These are extremely limited! – 11.1% ABV | 80 IBUs

The “remarkably limited” 100% barrel-aged variants of 2017: The Abyss Rum and The Abyss Tequila, will be released at the above locations on December 1st.

But to fully appreciate The Abyss consider attending the brunch that will see Deschutes open its doors two hours early at 9:00am.