Setting up shop at Lard West will be Claim 52 and is said to be offering an “incredibly dank” experience. The Pop-Up Pub will feature some well known beers from the Eugene brewery along with a new collaboration brew it brewed with Lardo.

Tan Lines Hazy IPA is the collaboration beer and uses Simcoe lupulin powder, massive amounts of Motueka and Citra hops, and is then finished with a ludicrous heaping of Meyer lemon zest. Tan Lines was also doused with a huge helping of Lardo’s signature ciabatta bread.

On Thursday, Friday, and Saturday Lardo and Claim 52 will host special events that includes Claim 52 bingo (where sandwich-eaters can win extremely limited Claim 52 + Lardo Swag), a DJ, karaoke and a caricature artist.

Throughout the week, look for special tappings of The Floor is Java (Nitro) and Barrel Aged Fake Love Saison

Lardo and Claim 52 shirts will be available for purchase while supplies last, and pint glasses will be given away and raffled off all week. 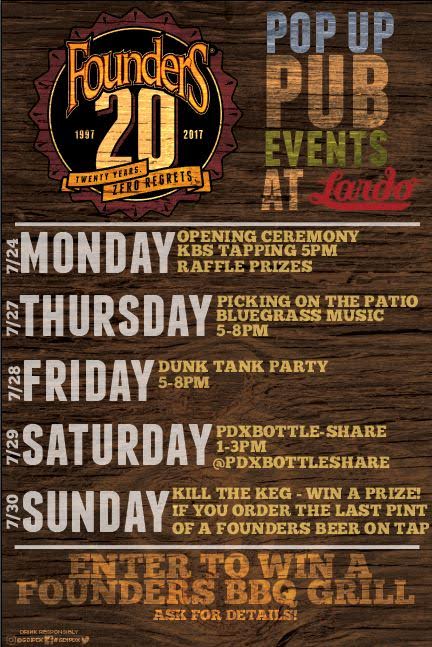 Founders Brewing will be the Pop-Up Pub at Lardo East from July 24-30, 2017. There will be a massive amount of Founders beers pouring during the last week of July.