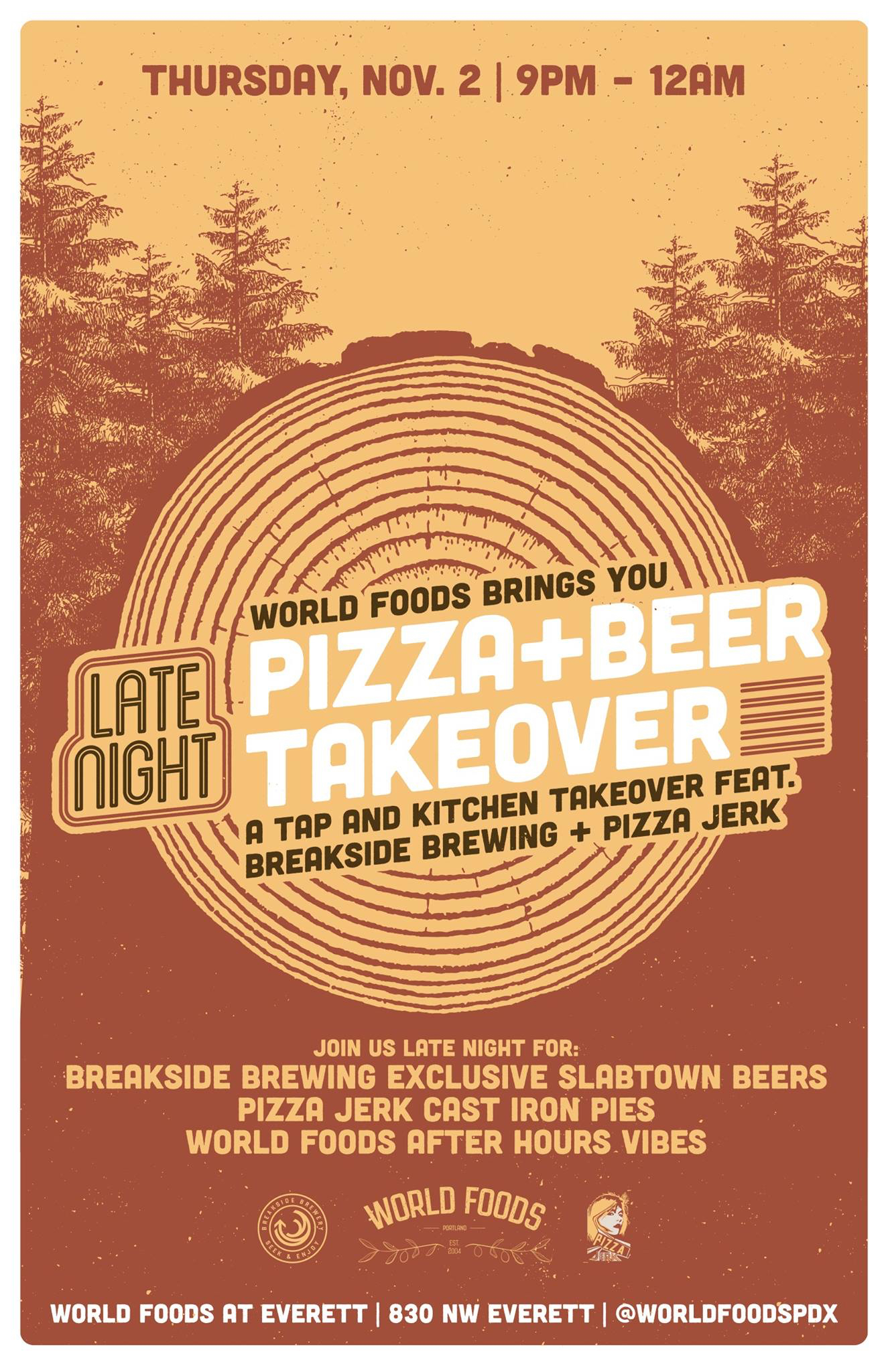 A new event will keep World Foods in the Pearl District open later then normal when it partners with Breakside Brewery and Pizza Jerk for its first Late Night Pizza+Beer Takeover.

Normally World Foods closes up shop at 9:00pm but on Thursday, November 2nd it will stay open until Midnight for this debut event. Late Night Pizza+Beer Takeover will begin at 9:00pm when Pizza Jerk will keep the ovens warm to produce its very popular pizza. During this same time Breakside Brewery will be taking over the taps pouring six of its beers along with offering beer samples and brewery swag.

And to keep it a festive time everything is only $5.00. This includes pizza, beer and wine pours for only $5.00 each!

World Foods Late Night Pizza+Beer Takeover Taplist:
Fall Apple Ale — Fall brings with it some of our favorite times, scents and flavors of the year: the aroma of burning leaves; the comfort of a campfire on a cold (not cool) night; baking spices in cookies and cakes; warm cider from freshly pressed apples. This beer is our attempt to distill these flavors into beer form. we’ve brewed a robust amber ale with a hint of smoked malt, blended in juice from freshly picked and pressed Washington apples, and added just a whiff of some baking spices to drive home the effect.
Back to the Future (IPA) — First brewed as a cross-border collaboration with our friends at Fremont Brewing in Seattle using varietals that we thought might be the “next hot hop.” this year, we’re reviving this beer in the same spirit, brewing it with combinations of hops that we think have a lot of promise and pairing those hops with ones that are already beloved.
What Rough Beast (Hazy IPA) — Contemporary India Pale Ale brewed with feet firmly planted in the Northwest and a nod to New England. Mosaic, Citra, and Columbus hops get lots of play here creating a beer that is tropical, fruity, dank, soft, and balanced.
Breakside Pilsner — Traditional German-style lager with clean bitterness. very light, crisp and refreshing.
Passionruit Sour Ale — 100% sour fermented wheat ale, inspired by German Berliner weisse and conditioned on passionfruit. a perennial favorite, this beer has won awards from the Great American BeerFestival, the Northwest Brewing News, and Willamette Week.
Cultivating Mass — Baltic porter aged in rye whiskey barrels. To make this decadent beer, we layered on one dark malt after another, performed two mashes to get the rich body where we wanted it, coaxed it through a long and cool fermentation, and aged it for nearly 18 months in Bourbon barrels from Kentucky’s storied Heaven Hill distillery.