Zeeks Pizza Bellingham is set to open its doors on Saturday, May 29. This will be the first Zeeks Pizza location in Whatcom County and nineteenth overall. This forthcoming location is locally owned by Matt Stotts, Julie Stotts, Brady Scott and Cindy Scott, operating under the name Fountain Pyze, LLC.

Located in the Fountain District at 2416 Meridian St., Zeeks Pizza Bellingham will take over the location of two short lived breweries in Bellingham. In 2017, Melvin Brewing opened its first Washington outpost at this location that closed a mere two years later after some serious sexual misconduct issues. Then in 2019, 122 West Brewing Co. took over the operations at this location and closed less than two years later.

Now with no brewing operations on site, Zeeks Pizza takes over to feature an excellent tap list that rivals any other beer focused taproom out there. Zeeks Pizza is known to partner with craft breweries and cideries on collaboration beverages. This collaborative effort has included many Bellingham breweries in the past. Eight of the seventeen initial taps will feature local producers including Aslan Brewing Co., Chuckanut Brewery, Kulshan Brewing Co., Lost Giants Cider Company, Otherlands Beer, Stemma Brewing Company, Structures Brewing and Wander Brewing. 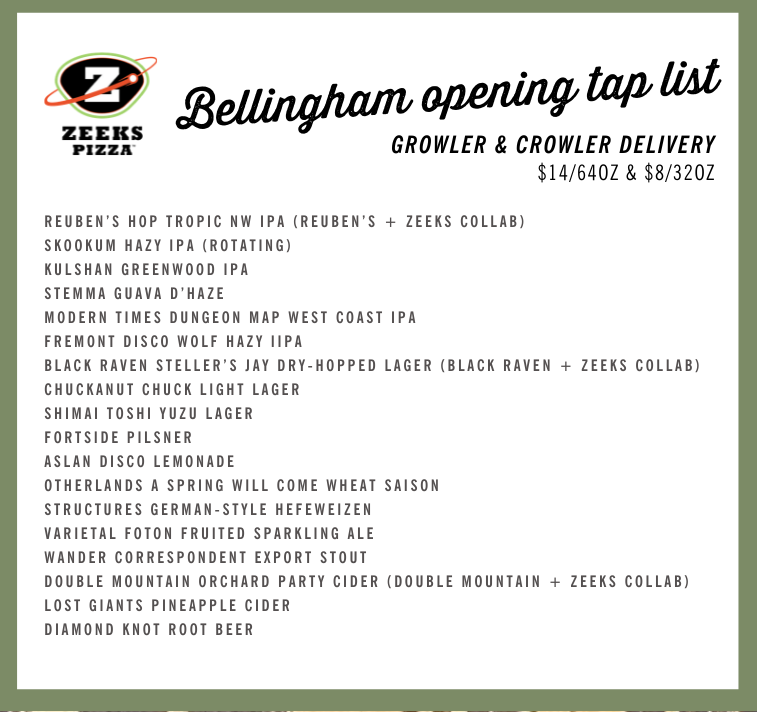 Zeeks two most renowned collaboration beers are the headliners.  Reuben’s Hop Tropic NW IPA and Urban Family’s Zeek & Destroy IIPA have a cult following in the Northwest and are the only two beers available year-round at Zeeks. Zeeks Pizza Bellingham’s delivery area will include most of Bellingham and by Washington State law food must be purchased to get alcohol delivered.

“We have been huge fans and advocates for Bellingham beer for a long time,” said Tommy Brooks, the Director of Zeeks’ beverage program, in a statement. “I can’t think of a better beer city than Bellingham for Zeeks to be a part of, and we aim to keep the beer dollars as local as possible. We could not be more psyched to be a part of the community.”

Limited outdoor seating will be available on May 29 and will continually expand after opening. In addition to dine-in, bar and delivery, take-out service will also be available. Take-out and Delivery can be ordered directly from Zeeks Pizza Bellingham using the Zeeks Pizza App (available at the App Store and Google Play), online at zeekspizza.com, or by calling 360- 858-8646.

Local owners Matt and Julie Stotts and Cindy and Brady Scott are thrilled to bring Zeeks Pizza to Bellingham. “Community connection is at the heart of our mission and we look forward to providing a space for neighbors, friends and family to gather around great food, the best local beer and a great customer experience 100% of the time.”, said Cindy Scott, in a statement.

“We are excited to open in Bellingham”, says Dan Black, President of Zeeks Pizza, Inc., in a statement. “The beer centric-culture and enthusiasm for the Northwest lifestyle rooted in outdoor adventure are a good match for us and Matt, Julie, Brady and Cindy embody the entrepreneurial spirit and community commitment that we love about franchising.”