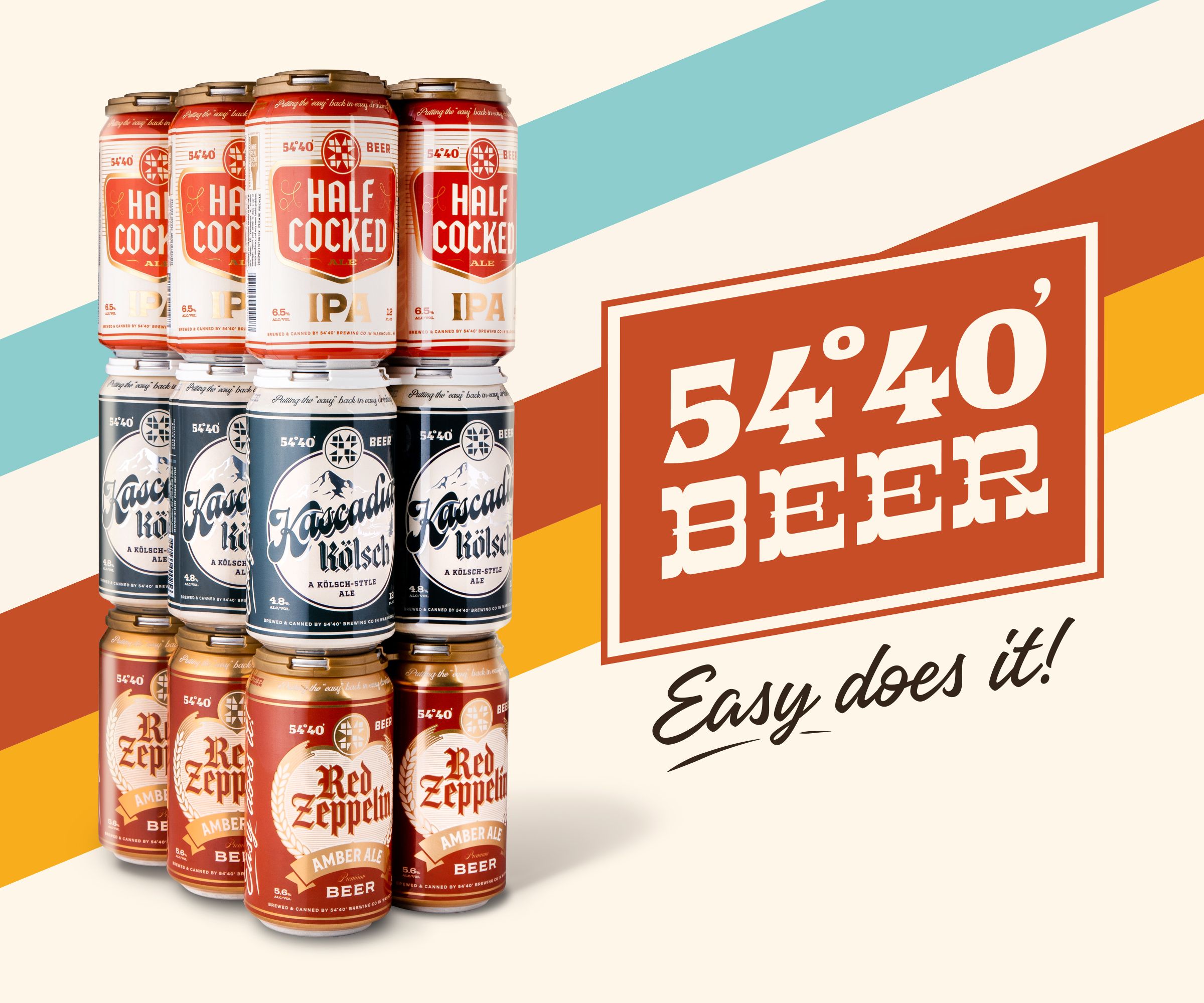 Washougal, WA – “After four years of growth making easy drinking beers, we’re extremely excited to marry those beers up with branding that fits our philosophy,” says Bolt Minister, Founder and Head Brewer, 54-40 Brewing. “It’s refreshing to finally see cans and a website that reflect the comfort that folks find in drinking our beers with family and friends.”

The fresh looks for 54-40 has developed from a great friendship that Bolt Minister started with freelance creative, Jordan Wilson Designs. Wilson and Minister worked together at Old Town Brewing in Portland, where Wilson designed materials for Minister’s tribute beer festival to George Jones. “Jordan has always understood the aesthetic of the beers I make, and his insight has been huge in realizing the vision for the brand,” Minister says.

“There’s a lot to consider when tackling a large-scale rebrand. For us, it was important to take a step back and try to see the bigger picture.” says Jordan Wilson. “Bolt and his team at 54-40 were already operating under a culture of values and ideals – my part was to help translate these pillars into a visual language.” Speaking to the overall system, Wilson shares that the 54-40 brand is structured by one simple idea. “Putting the ‘Easy’ back in ‘Easy-Drinking’ was our call to action.” He says. “It’s not about a light lager, but a mindset; a place of comfort that is accessible low pressure, and fun. The use of nostalgia helps visualize that feeling. We looked through a vintage lens to help develop color palettes, type specimens, and flavors throughout every touchpoint of the brand.”

The updated look of the cans brings continuity to the packaged offerings for 54-40, so loyal fans of the beer will be able to easily spot styles offered from the brewery. The new packaging of the year-round beers can be found around the Northwest now, and include 12oz six packs of:

In addition to the new cans, Wilson has also left his mark on 54-40’s online presence, building a new website from scratch. “The old site, was pretty bare bones and didn’t offer much in the way of personality,” mentions Minister, “Jordan’s site has a ton of great information and functionality, but he has also put the personality of the brewery front and center.” Visitors to the newly launched 5440beer.com can explore events at the taproom, reserve dock sales, find distributors for their region, shop merchandise, and more. “54-40 is busy.” says Wilson. “Whether it’s one of their weekly events, new food items. beer tappings, merchandise drops – there’s a constant state of new things going on. Our main goal was to provide a space for customers to easily engage and connect with the brand and the exciting things that frequent the brewery.”

54-40’s brand growth has also led them to partner with Dickerson Distribution out of Bellingham, Washington. “Having a terrific craft focused partner in Dickerson, allows us to distribute beer the entire I-5 Corridor from Southern Oregon to Northern Washington,” Minister notes. Dickerson joins, Craig Stein Beverage and NW Beverage for the brand’s Washington distribution, while Point Blank, Summit, and Fort George Distribution handle the brand in Oregon.

Lastly but certainly not least, 54-40 Brewing is excited to announce the hire of Seth Swihart as Lead Brewer. Swihart has been working in production breweries for the last decade, including Big Sky in Montana, Portland Brewing, Hair of the Dog, and most recently Ecliptic Brewing. “Seth brings a know-how to the brewery for increased production along with an enthusiastic and creative nature,” Minister said. “We’re excited for this next chapter of growth, and couldn’t be happier making it happen with great people and partners on our team.”