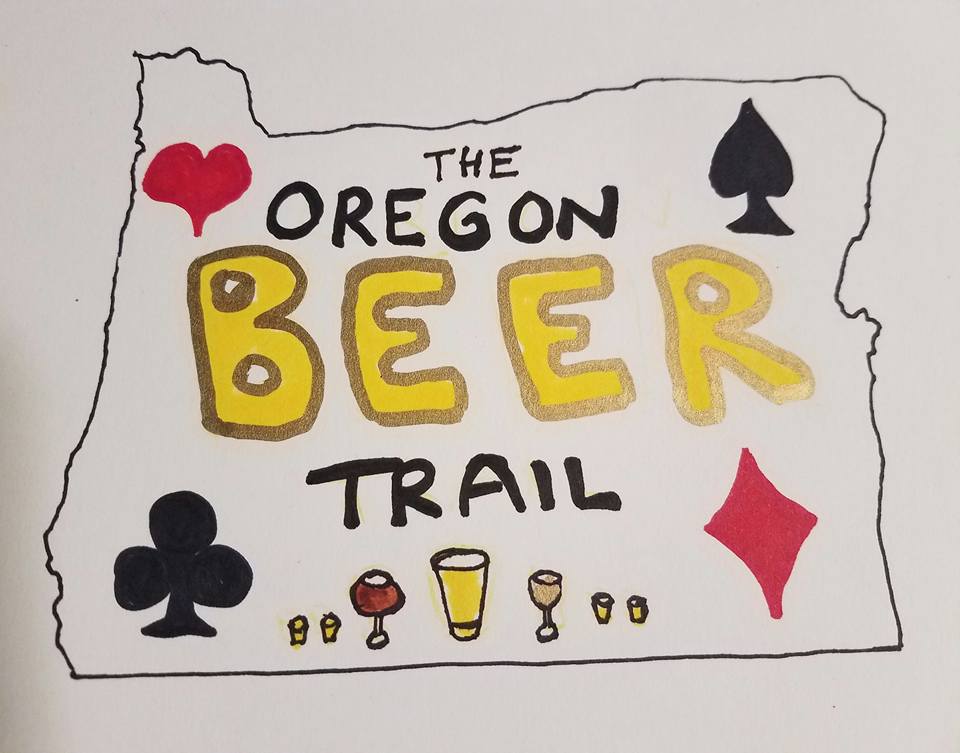 This weekend at the Portland Fresh Hops Fest, Portland artist Aaron Trotter will launch his latest deck of Illustrated Playing Cards. Over the past two years Trotter visited 52 breweries in and around Central Oregon, Columbia River Gorge, Oregon Coast, and the Willamette Valley to illustrate a different brewery on each of the 52 playing cards.

The first printing of 100 decks of Oregon Beer Trail Illustrated Playing Cards will debut at the Portland Fresh Hops Fest at Oaks Amusement Park on Friday evening and Saturday for $20.00 each.

In November 2010 Trotter released his first deck of Illustrated Playing Cards with Landmarks of Portland. Then in 2013 he released his first foray into craft brewing with the deck Portland Breweries. Now a few years later he traveled throughout the Beaver State to sketch 52 additional breweries.

But with so many breweries in our state this must have been a daunting task. “With over 250 Oregon Breweries, I narrowed my focus to the existing Ale Trails within a 1 day’s drive of Portland,” writes Trotter. “It is not a comprehensive guide but I think it represents most of the best outside Portland. I couldn’t include everyone; some breweries I wasn’t able to visit, and some that I did visit just didn’t quite fit in the final rotation.”

The drawings were sketched with pen and ink on location in a succession of road trips over the last two years, then finished at Trotter’s studio in Northeast Portland. The cards are digitally printed on cardstock in Portland; each box is signed and numbered by the artist. 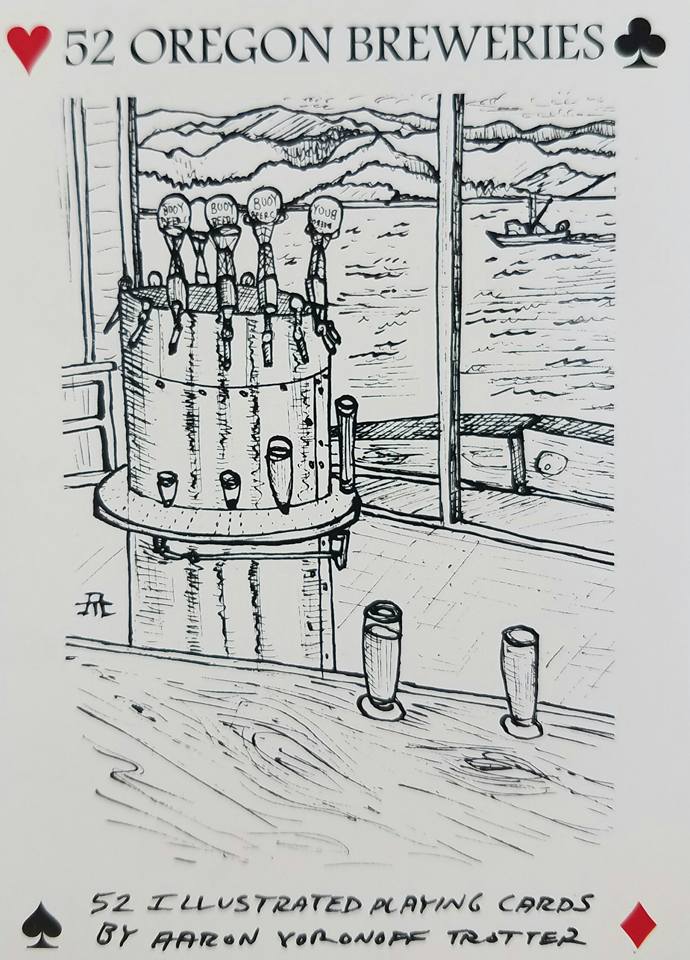 Here’s our interview with Aaron Trotter…

Four years ago you released your first deck of cards, Portland Breweries, what made you decide to do this?

Aaron: I was at the Oregon Brewer’s Festival in 2013 when the idea came to me. I had been producing my own playing cards to collect my drawings since 2010. After the festival, I started adding it up to make sure that there were enough unique breweries in the Portland area (not counting multiple locations) and sure enough there were. It is still my best-selling deck of cards; I update that deck once a year, rotating the newest breweries in.

Were you a fan of craft beer prior to doing your first set of cards?

Aaron: Yes, I’ve always loved craft beer, and the community that one can find at a local brewpub. I found a lot of parallels between craft beer and my craft cards. The brewery is my second studio.

What is your go to beer style?

Aaron: These days I’m enjoying the hazy citrus IPAs. In the colder months I’ll go for a bourbon stout.

Do you have a favorite brewery? If so which one(s)?

Aaron: Everyone asks me this. I don’t have a favorite. But, my favorite is technically whichever brewery is closest to me. Based on NE Alberta street, Great Notion is the nearest one, but there are so many good breweries. I am also near Old Town Pizza, Hopworks, Breakside, Lompoc, Stormbreaker, and Ecliptic. So I guess those are my favorites. Burnside and Wayfinder have superior food and patios.

Since Portland Breweries was released you have also released other decks of cards. How did you decide which other themes to be part of this series?

Aaron: My first deck, Landmarks of Portland came out in 2010. Since then I’ve been traveling to other cities, sketching famous landmarks, historic buildings and typical scenes. Each year I make a new Portland deck; so I offer Secrets, Wineries, Old Portland, and an upcoming Oregon Coast set.

Your upcoming deck of cards is Oregon Breweries. How did you approach the breweries to be part of the series?

Aaron: The breweries themselves did not pay to be included. To make the original drawings, I visited each brewery and had a beer while sketching. I don’t use a photograph, just draw what I see and embellish the details later. I don’t always get a chance to tell my server or bartender what I’m doing, and usually prefer to wait and show them the finished product. I don’t expect any free beers, but they’re always welcome. If any brewery has an issue with the way they’re represented, it’s easy to rotate them out for the next printing.

Will any of the featured breweries be selling your Illustrated Playing Cards?

Aaron: Not yet, but they are welcome to contact me. I offer a wholesale price for any interested brewery or bottle shop. The Oregon Beer Trail cards will first be available at the Fresh Hops festival Sept 29 and 30th, at my Saturday Market booth every weekend until December 24th, and on my website.

Do you have any plans for additional beer themed playing cards?

Aaron: I am re-releasing Puget Sound Breweries along with the new Oregon Beer cards. There are a few other Ale Trails across the country I’d like to get to, but we’ll see. That’s a lot of beer. Also on my list is Vancouver BC, San Diego, Denver, Asheville, and Minneapolis.