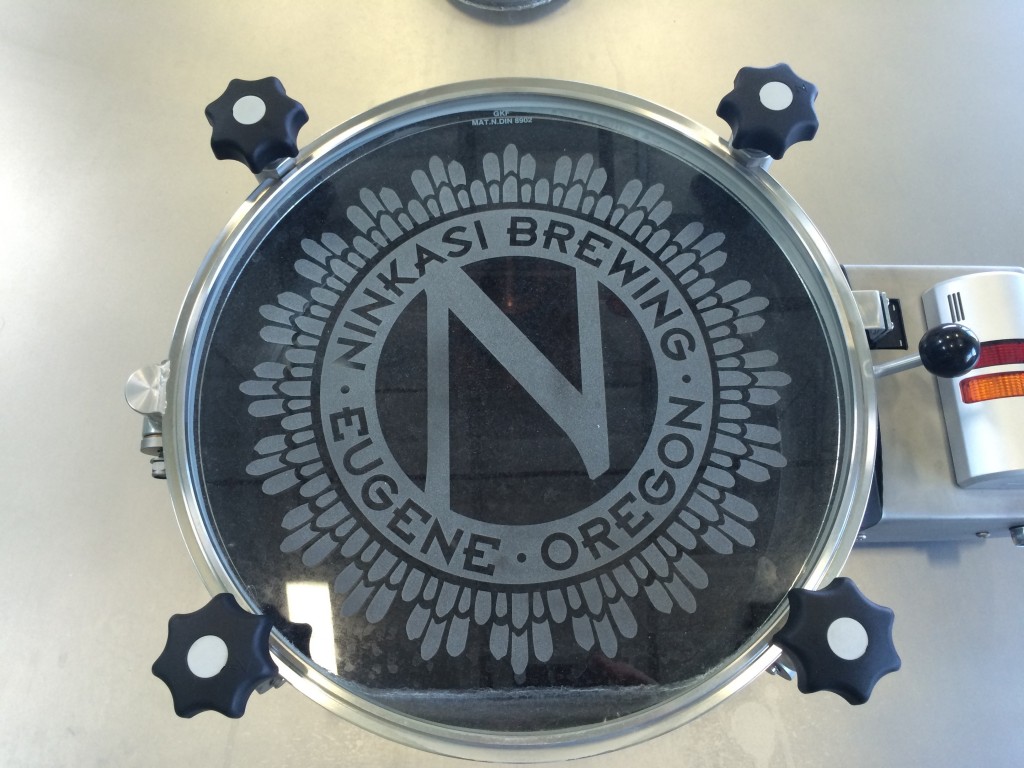 Oregon breweries have been producing beers for the past 150 years. However it was until the “Brewpub Bill” of 1985 that allowed for smaller brewing operations to begin production on a scale that made it financially feasible. Since 1985 Oregon has seen its fair share of the massive growth in the craft brewing industry and is currently home to over 180 brewing companies. The shear quantity of breweries has seen its growth multiple much more rapidly over the past decade. One of the most rapidly growing breweries in all of Oregon has been Ninkasi Brewing. And now the brewery is not only brewing beer but is embracing and emphasizing its strong connection to the world of art at its own Ninkasi Music Studios and Artist in Residence program. But its in-house Metal Shop is one that has recently gained some mega notoriety when it recently built and installed a massive entrance gate project for Sierra Nevada Brewing at its new Mills River, North Carolina brewery.

Founded by Nikos Ridge and Jamie Floyd, Ninkasi Brewing brewed its first batch on June 15, 2006, just 6 months after the pair met to discuss their ideas on what would lead to Ninkasi Brewing. Since its beginnings, Ninkasi Brewing had its sights set on big hoppy endeavors. The brewery started out by leasing space to brew on its 15 BBL brewhouse across Interstate 5 in Springfield, OR. A year later the pair purchased property that truly transformed the west end of Eugene’s Whiteaker neighborhood.

Now having been at this same location in the Whiteaker neighborhood for the past eight years, Ninkasi has seen its brewhouse grow from its original 15 BBL brewhouse size and replaced with a 55 BBL brewhouse in very little time. Then last year Ninkasi brought online its latest 90 BBL brewhouse. Combined both the 55 BBL and 90 BBL brewhouses will be able to produce up to 250,000 BBL of beer per year. It may be a few more years for the brewery to reach this massive amount of beer, as Ninkasi is currently the third largest brewery within the State of Oregon and the 36th largest craft brewer in the United States, but it is definitely in sight.

As Ninkasi’s output grew the brewery continued to expand its distribution footprint. Last month Ninkasi announced that it signed a distribution agreement with Andrews Distributing Company of Dallas, Texas. This partnership will see the arrival of Ninkasi Brewing’s full lineup of beers that includes Total Domination IPA, Tricerahops Double IPA, along with its popular Seasonal and Special Release beers beginning on September 14.

“North Texas is a rapidly expanding market with a huge population and an ever growing thirst for Craft Beer,” explains Nikos Ridge, Ninkasi CEO and co-founder. “Entering into a growing craft beer market with a team who fuels that growth is an exciting prospect; we feel fortunate to have the opportunity to be working with a craft-focused and innovative partner”

This new market in the Lone Star State will be in addition to its already established distribution footprint of Oregon, Washington, California, Idaho, Alaska, Utah, Colorado, Arizona in the United States and British Columbia and Alberta in Canada. Ninkasi beer is available in 12oz Bottle 6 Packs, 22oz Bottles and on draft.

As Ninkasi expanded its brewery production it also ventured into new segments that make up its well-rounded business. Floyd is a huge fan of music and this and beer meld flawlessly together. This past November Ninkasi decided to build out a new recording studio inside its newly expanded office space. James Book, Brand and Experiential Marketing Director is at the helm of Ninkasi Studios. He is recording local and regional bands on a more consistent basis as time allows. So far the studios has seen Black Beast Revival, Bustin Jieber, Betty and The Boy, among others. Then in March 2015 Ninkasi Studios released its Dawn of the Red Compilation EP that can be downloaded for free here.

Book describes the recording process as, “I see the art of crafting beer in a light similar to songwriting and the pursuit of the audio recording arts. Not surprisingly these days, being a craft brewery feels more like “being in a band” than actually being in a band in terms of what the music industry started to become for me personally in the early part of the new millennium –which is why I left that business as a fulltime pursuit for craft beer and turned my musical skill set toward marketing beer in a way not dissimilar to the way musicians self-market their music and band “brand”. Luckily, since around 2005 the maker movement and the surge in popularity of all things “craft” and “DIY” and along with it, a better general acceptance of new ways of doing things has really begun to be quite celebrated in music, craft beer and beyond.”

More recently Ninkasi’s appreciation of art has taken the brewery into a new direction when it debuted its Artist in Residence (AIR) Program last month. Since the brewery’s beginnings Ninkasi has been very involved in the art scene and has already been using an in-house design team to direct and produce all of its very appealing branding. Now the brewery has opened its doors to selected artists in a variety of skill sets. Artists will be contracted annually to work hand-in-hand with Ninkasi’s marketing and design teams.

The first AIR artist is Neal Williams, a Eugene-based gig poster artist and illustrator. Over the years Williams has worked with notable bands including The Black Keys, Queens of the Stone Age, Dave Matthews Band, The Head and The Heart, Soundgarden, Andrew Bird, and Interpol among others. More recently, Williams’ artwork was found on Ground Control, an Imperial Stout fermented with Ale yeast that survived a trip to space and back. After the success of that release in April, the brewery decided it was time to create a program to harness these relationships. 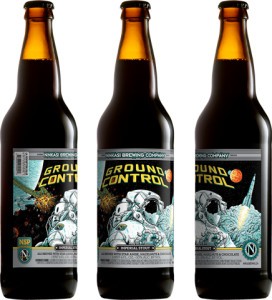 “The forward-thinking use of artwork in our creative has been a significant factor in the success of our brand,” explains Jon Rogers, Ninkasi CMO. “We are thrilled to launch a program to support artists in our local communities and at the same time, help us achieve our mission to Perpetuate Better Living.”

“When I came to Ninkasi, I got the chance to see the brewing process and learn more about the care and attention to detail that goes into the beer; it’s all about taking the time to produce something of quality,” says Williams. “I feel exactly the same way about my illustration work.

Starting this month, Williams will set up a workspace inside of Ninkasi’s Eugene headquarters. There, Williams will continue his work on outside projects while lending his illustration talents and expertise to Ninkasi-specific collaborations throughout the next year.

“Our goal is to continue to enhance our brand, our workplace and the greater Ninkasi community,” states Rogers. “Through the AIR program, we’ll bring multiple artists with varied skills into our brewery to engage with our workers, offer seminars, and collaborate on key projects.”

“So much of my work with bands is done solely over email; being able to go into work and collaborate in-person has been a breath of fresh air,” says Williams. “I’ve been impressed with the amount of creativity surging throughout Ninkasi, as well as the fact that no matter what your position is, your opinion is taken seriously.”

Williams’ first projects will include the label art for a unique offering from the brewery, Imperial Pumpkin Sleigh’r, along with special edition artwork for its India Red Ale, Dawn of the Red, for the 2015 Halloween timeframe.

The art doesn’t end on the canvas as Ninkasi has been operating its own in-house Metal Shop for many years. Tucked away to the west of the brewery is its Metal Shop that specializes in artistic and elaborate steel, twisted into shapes and patterns for its tap handles, bottles openers, bar signs, gates, fire pits and more. Led by lead metal fabrication and design specialist Jazz Khalsa and his assistant metal fabricator, Pat “Phatty Fab” Evans, Ninkasi’s Metal Shop has been turning out some of the best decorative metal pieces in all of brewing.

Then last year Ninkasi received the best request ever from brewing legend Ken Grossman of Sierra Nevada Brewing. From what began as a cross-country road trip for last summer’s Sierra Nevada Brewing’s Beer Camp Across America Beer Festivals, Ninkasi and Sierra Nevada teamed up for Double Latte: Coffee Milk Stout. This beer was part one of the twelve beers from last summer’s Beer Camp Across America 12 Pack release. It was during this cross-country trip while on a tour bus when Grossman asked Floyd to have Ninkasi’s Metal Shop provide the ultimate gift for Sierra Nevada’s new brewery in Mills River, North Carolina. Ninkasi was asked to produce the new brewery entrance gates for Sierra Nevada Brewing’s new North Carolina brewery. These are the gates that will be seen when entering this state of the art new brewery.

Prior to Ninkasi’s Metal Shop beginning actual physical work on the gates in December 2014, Grossman and Floyd mapped out a plan. Sierra Nevada was in need of two gates that would offer an entry appeal to its proper like no other. This is when Floyd sat down with Ninkasi’s lead metal fabrication and design specialist Khalsa and to sketch out a massive gate that would leave an impression in North Carolina of the craftsmanship from here in Oregon.

From here Ninkasi presented Sierra Nevada with one massive design of a mammoth steel gate that contains waving sheaves of barley to span across the 20-foot drive. Over the past 7 months the Ninkasi Metal Shop augmented this steel with plenty of fire and strength to produce a set of gates that weighs more than 3,000 pounds. But the fine detail work is very evident in the gates as the shop used more than 673 metal barley kernels affixed by 13,444 nuts to make this a truly massive work of art. Then these gates traveled 2,663 miles from its Eugene origin to Mills River to be installed at its new home.

“I’m really pleased with the design they gave us,” said Grossman. “The motivation was clear to them. They got it, and they get us. They understand what we’re trying to do here, and I think it’s because we’re both brewers and both share a lot of the same ideals.”

“The day I got the call to be a part of Beer Camp Across America and to hear from Ken ‘You’re doing things right,’ was one of the best moments” said Floyd. “It’s wonderful to continuously see examples of the level of collaboration in the craft beer community.”

What began, as a small start up eight years ago from Ridge and Floyd is now a massive business that now employees over 100 employees. Tonight, Tuesday, August 25, Ridge and Floyd will be in Portland for a Meet the Brewers Workshop featuring an interactive session of conversation and beer at TILT NW Beer Garage in Portland’s Pearl District from 6:00 to 9:00pm.