New beer styles come and go but one that truly highlights the individual ingredients of a beer is when a brewery brews a single malt and single hop beer, also known as S.M.A.S.H. Sometimes these beers work out well but with certain malts and hops its best when used in a blend of multiple ones to create a much more rounded taste. Regardless this is an excellent learning experience for both the brewer and the drinker.

Last year Portland Brewing released its S.M.A.S.H. Pale Ale to the masses. S.M.A.S.H. has made its return once again to store shelves in both 12 oz. and 22 oz. bottles along with its draft counterpart through the month of August. However for the 2016 release Portland Brewing has partnered with local comic book creator Dark Horse Comics, to design a comic book cover that honors S.M.A.S.H.

Mike Richardson founded Dark Horse Comics back in 1986. Located in Milwaukie, Oregon, Richardson has grown Dark Horse Comics over the past 30 years to become the largest independent comic book publisher in the United States. During this time he also launched Dark Horse Entertainment that led to television and film deals for a few of his company’s creations.

For the S.M.A.S.H comic book cover, artist Ron Randall created this artwork that brings S.M.A.S.H. Pale Ale to life. “This poster was a blast to draw – a cool beer on a warm summer day can indeed feel like an epic conquest,” stated Randall in a news release. “It was fun to embody that image in a classic, over-the-top, superheroic struggle against the evil forces of Thirst.” 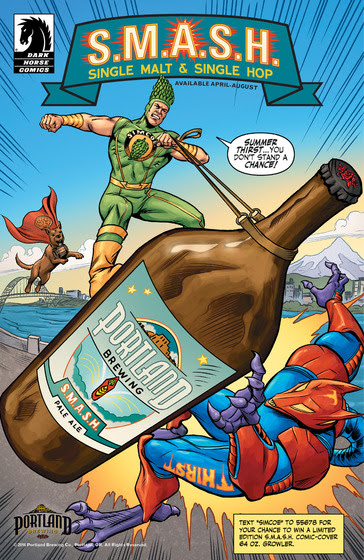 The comic book illustration highlights S.M.A.S.H.’s combination of one hop and one malt by turning them into characters. Captain Simcoe Hop is seen riding a bottle of S.M.A.S.H. Pale Ale across the Willamette River with his trusty sidekick, Vienna Malt. Their goal — take down the evil villain, Summer Thirst.

Ron Randall will be signing the exclusive S.M.A.S.H. posters at various locations throughout Portland this summer. Portland Brewing is also giving away 50 limited-edition 64oz. growlers featuring the S.M.A.S.H. comic cover between the months of May and July. Portland Brewing will be giving away a few of these exclusive growlers. Text SIMCOE to 55678 for your chance at winning one of these growlers. Also be on the lookout for special events, featuring Portland Brewing and Dark Horse Comics this summer, including during PDX Beer Week from June 9 – 19.