Set to launch just in time for National Park Week the begins on April 16, Pendleton Pale Ale is brewed with hops and malts grown on Rogue Farms in Oregon that honors our state’s scenic beauty. Pendleton Pale Ale will be available in 12 oz. cans at select retail locations, Rogue Pubs, and Pendleton stores throughout the Beaver State. Pendleton Woolen Mills’ National Parks Collection that was released last year inspired the can’s label design. 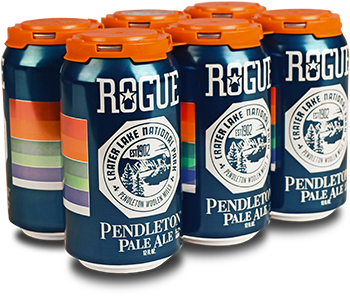 Pendleton Woolen Mills has been an a six generation family owned iconic Oregon company that recently celebrated its 153rd year in business. Pendleton is highly regarded for its fabric milling operations. It was 100 years ago that Pendleton’s first connection to our beloved National Parks came about when it released its first National Park Blanket, Glacier Stripe, honoring Glacier National Park in Northern Montana.

“We can’t think of a better time to honor our state’s only National Park than on the 100th birthday year of the National Park Service,” said Rogue President, Brett Joyce in a news release. “Pendleton has done such a wonderful job paying homage to the great outdoors with their National Parks program, it’s a privilege for us to brew this beer inspired by the beauty found in our own backyard.”