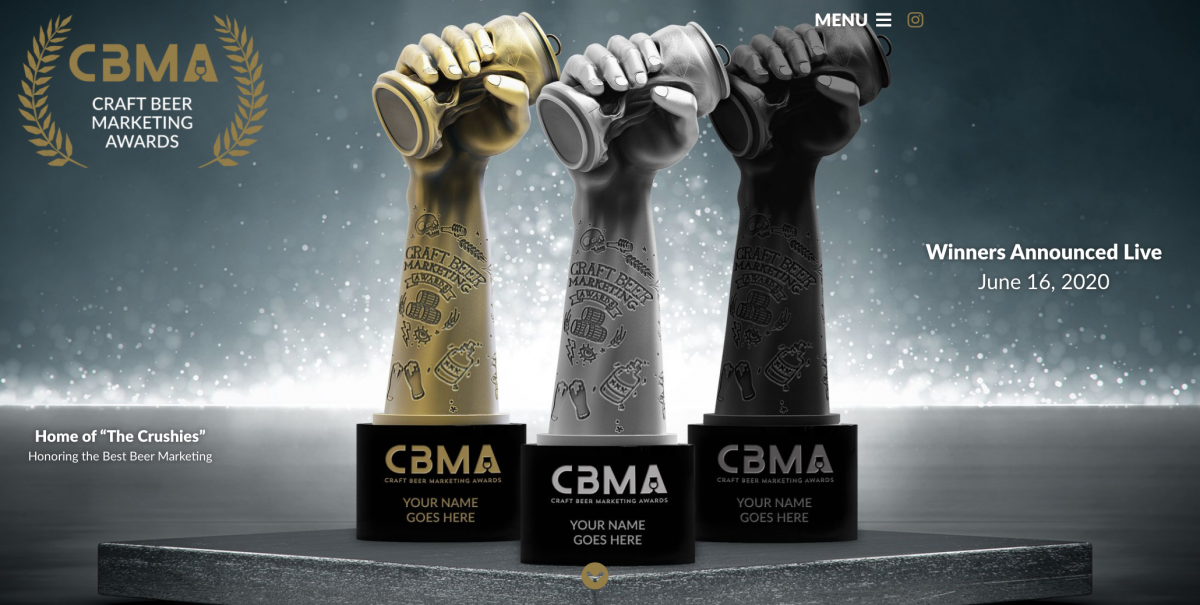 The judging has been completed and on Tuesday, June 16th the awards ceremony for the inaugural 2020 Craft Beer Marketing Awards will take place on Facebook Live beginning at 1:00pm PST.

The Craft Beer Marketing Awards (CBMA) were originally scheduled to take place in April during the 2020 Craft Brewers Conference in San Antonio, Texas. But with the COVID-19 pandemic this conference was cancelled and the CBMA were put in a holding pattern. Now two months later the awards ceremony will take place where 32 categories of craft beer marketing will be awarded in an online ceremony.

The CBMA is the first awards program of its kind in the USA. The awards program officially launched and began accepting entries in the fall of 2019. It has received entries from nearly every state in the country, in addition to submissions from Mexico and Canada.

The presenting sponsor of the CBMA is Hillebrand as they will co-host the event along with CBMA Founders Jim McCune and Jackie DiBella. Additionally, KegPros from Hillebrand will be presenting the winners of the “People’s Choice” categories.

“More than ever, breweries recognize the need to prioritize their marketing strategies,” said Prabh Hans, VP Business Development & Strategy for Hillebrand, CBMAs Presenting Sponsor, in a press release. “We’ve worked closely with brewers since 1984 and know that shelves and cities are flooded with an overwhelming amount of craft beer options. The CBMAs team recognized how much time and money these breweries are now investing into branding efforts and created a one-of-a-kind opportunity to celebrate them. Hillebrand is proud to sponsor the first–ever Craft Beer Marketing Awards, a truly unique and important event for the craft beer industry as it continues to grow.”

One of the many things that separates craft brewers from its larger counterparts is its marketing. This includes all aspects from the brewery’s logo to packaging artwork to its online presence and beyond. Craft brewers have a great story to tell and much of this is done through its marketing and now this hard work will have an opportunity to get acknowledged and awarded.

The Craft Beer Marketing Awards feature categories that celebrate the very best of beer marketing and the teams, and individuals behind them. All categories are judged by an influential and respected panel of beer, marketing, and design experts from across the country. A few of these judges include two Portlanders – Tomas Sluiter from Culmination Brewing and Ben Love from Gigantic Brewing. Check out the full panel of over 100 judges here. The CBMAS judging process is a robust, credible, and transparent digital scoring.

The 2020 CBMA consist of 32 categories which cover all aspects of brew marketing- from labels to logos; from tap handles to tap rooms. Entry was open to anyone involved in marketing within the brewing industry.

CBMA is excited to reveal its official trophy, The Crushie, for the series of awards, including the Platinum Crushie, the Gold Crushie, and the People’s Crushie. The CBMA Crushie trophies were designed and manufactured by the same NYC designer awards firm that creates the prestigious Emmy Award, and MTV Moonman Statue. The Crushie award is sculptured to depict a heavily tattooed arm crushing a beer can representing how breweries are “crushing it” with their unique, and creative beer marketing and branding. A full list of winners will be listed after the ceremony and posted on the main CBMA website.