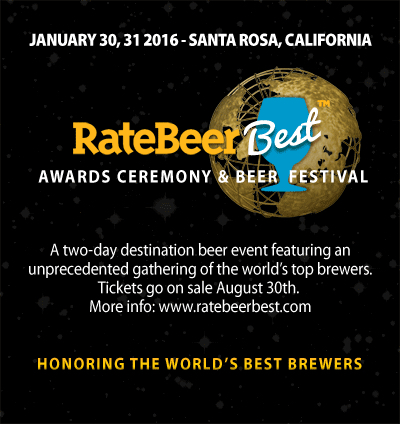 SANTA ROSA, Calif. (August 13, 2015) – RateBeer, the most accurate and most-visited source for beer information, has partnered with Visit Santa Rosa to present a two-day destination beer event featuring an unprecedented gathering of the world’s top brewers. Named one of America’s 5 Best Beer Cities by Wine Enthusiast magazine and home to Russian River Brewing Co., which has won the prestigious Best Beer in America award from the American Homebrewers Association for seven consecutive years, Santa Rosa has quietly established itself as a dominating force in the craft beer scene. With thousands of beer lovers trickling into this wine country town every year to sip at the source, it’s no wonder that RateBeer chose Santa Rosa as the host town for this highly-anticipated event.

Since 2002, the RateBeer Best Awards has attracted international attention, created market-changing demand and evolved into the brewing industry’s premier and most influential international awards program. Typically released annually in an exciting, weeklong series of online announcements on the RateBeer web site, 2016 marks the first time that the world’s largest beer competition combines those announcements with a live awards show and beer festival.

“RateBeer is bringing together a world community of best brewers,” explains Joseph Tucker, Executive Director of RateBeer. “It’s a beer nerd’s must.”

The RateBeer Best Awards Ceremony, which is a private event for brewers and VIPs, will be hosted at Santa Rosa’s Hyatt Vineyard Creek Hotel and Spa on Saturday, January 30th. Honoring the world’s best brewers, the event will be filmed and shared worldwide via a live webcast. Three hundred tickets will be available to the public. The beer festival on Sunday, January 31 will feature 60+ brewers from around the world, including beers that have never been poured in California. To date, event organizers have confirmed 39 brewers from 12 different countries. Fifteen hundred beer lovers will have the opportunity to drink RateBeer Best winners, enjoy non-ticketed pours and food from top Sonoma County chefs and take home commemorative pint glasses. Both events will benefit Ales for Autism,  a local 501(c)3 non-profit organization that creates unique beer related events to raise money and awareness for autism.

RateBeer Best results will be partially released beginning the week of January 23, 2016. The full results will be available following the RateBeer Award Ceremony on January 30, 2016. For RateBeer Best past results, please refer to http://www.ratebeer.com/RateBeerBest. To purchase tickets and learn more about the inaugural Rate Beer Best Awards Ceremony and Beer Festival, please visit www.ratebeerbest.com.

Information on dining, lodging and activities in Santa Rosa is available at www.visitsantarosa.com.

About RateBeer
RateBeer is widely recognized as the most accurate and most-visited source for beer information. RateBeer is an independent world site for craft beer enthusiasts and is dedicated to serving the entire craft beer community through beer education, promotion and outreach.

Since May 2000, RateBeer has remained an active forum for beer lovers to come together and share opinions of beers, and beer retailers in a free environment. Established and maintained by dedicated volunteers, RateBeer has become the premier resource for consumer-driven beer ratings, features on beer culture and industry events, weekly beer-related editorials, and an internationally recognized, annual RateBeer Best competition. A vibrant community of hundreds of thousands of members from more than 100 countries have rated hundreds of thousands of different beers around the world. Our mission is to provide independent, unbiased, consumer-driven information about beer and breweries and to enhance the image and worldwide appreciation of beer.

About Visit Santa Rosa
Just 55 miles north of San Francisco, Santa Rosa, California has an abundance of recreational activities, epicurean delights and scenic vistas for visitors to enjoy. Situated in the heart of Northern California’s world-famous Wine Country and just 30 minutes from the stunning coast, it is Sonoma County’s largest city, with a small-town feel. Home to superb wineries and craft breweries, some of the country’s best bicycling routes, and the Charles M. Schulz Museum – along with many other attractions – this warm and friendly city is a blend of art and culture, food, wine and recreation.

“Visit Santa Rosa” is the tourism brand administered by the Santa Rosa Convention & Visitors Bureau, a division of the Santa Rosa Chamber of Commerce. The bureau provides assistance to visitors and groups seeking information about lodging, dining and entertainment opportunities in Santa Rosa. It also operates an Official State of California Welcome Center and helps to bring major events to Santa Rosa, such as the Amgen Tour of California. For more information, call (800) 404-7673 or (707) 577-8674 or see www.VisitSantaRosa.com.