Eleven years in, the 2019 edition of Zwickelmania returns to Oregon breweries across two weekends in February. This annual free statewide brewery open house brings out thousands of craft beer fans to tour and sample beer produced in the Beaver State.

Presented by the Oregon Brewers Guild, the 11th Annual Zwickelmania brings together breweries to open its brewery for tours and tastings over two consecutive Saturdays on February 16 and February 23. Portland metro area breweries will host over President’s Day Weekend on February 16th and the rest of the state will host on February 23rd. The Guild expects over 30,000 attendees over the course of the two weekends. Zwickelmania will take place from 11:00am-4:00pm.

This now eleven-year event is name after the zwickel, a valve on a brewing tank that allows a brewer to sample the beer during the fermentation process for quality control and assurance. This event also allows brewers to interact a bit more with its customers and many brewers pour its beer samples from the zwickel to assist in the educational process.

“The brewing industry is built on community, especially here in Oregon. What better way to build on that sense of community than to hold an event where we open our doors to beer lovers?” added Christina LaRue, co-executive director of the Oregon Brewers Guild in a prepared statement. “Zwickelmania is an opportunity for them to get a peek behind the curtain, meet brewers, perhaps learn something new, and taste some great beers. It’s an all encompassing experience––something Oregon breweries excel at.”

New for 2019 is the first Zwickelmania collaboration beer that was brewed at Double Mountain Brewery in Hood River. Collab West Coast IPA is a beer that brought together 37 Oregon breweries, some well-known and a few new breweries to brew this hop forward IPA. Packaged in a 500mL, Collab West Coast IPA is a limited-run bottled beer that will only be available for purchase at participating breweries starting on Zwickelmania. Proceeds from sales of the beer benefit the Oregon Brewers Guild that supports breweries, suppliers, education and collaboration. 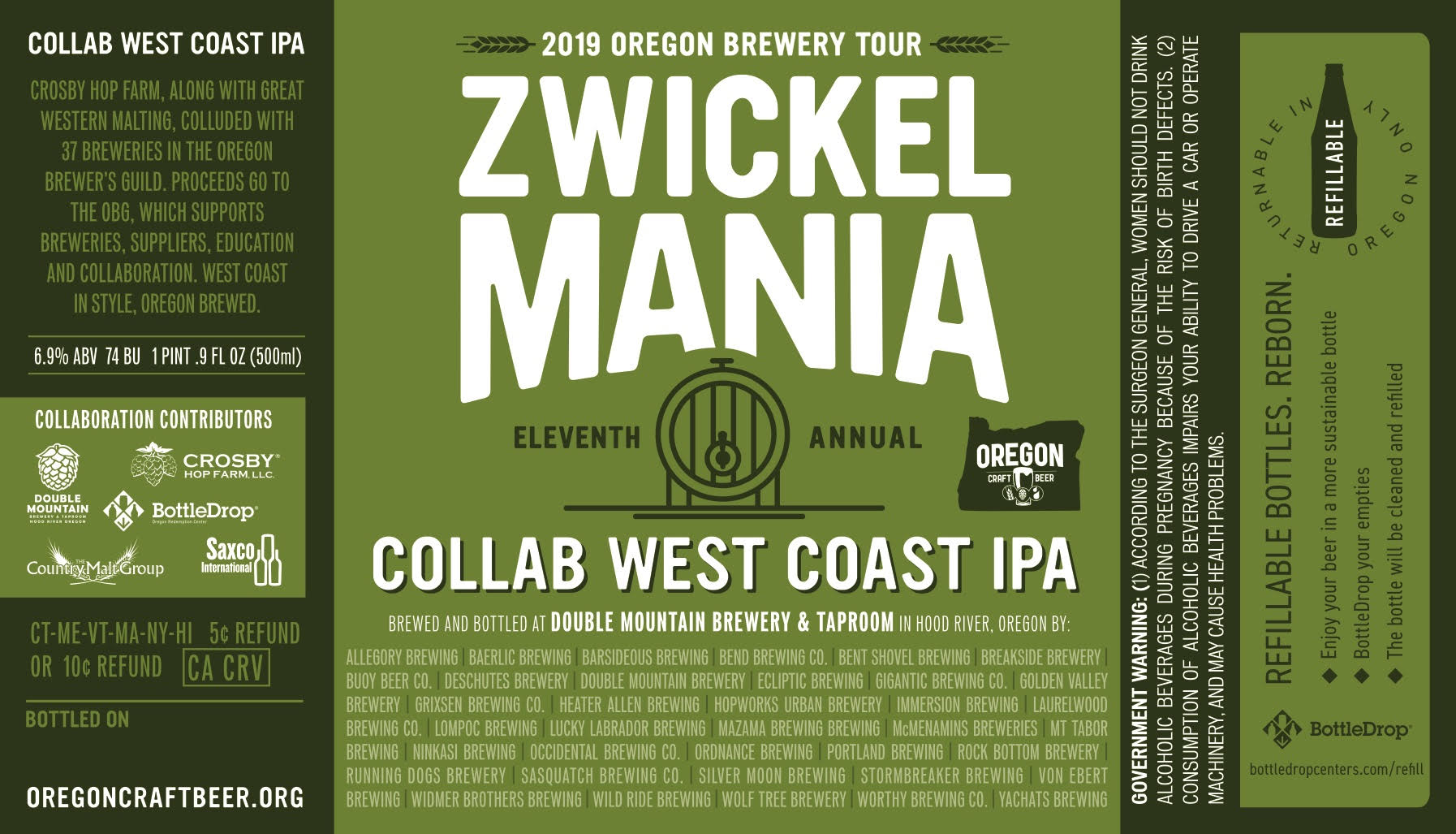 “Collab West Coast IPA is a celebration of the friendly and collaborative nature of the Oregon beer scene, with breweries from Yachats to Boardman and everywhere in between working together,” explained Tony Roberts, co-executive director of the Oregon Brewers Guild in a prepared statement. “Zwickelmania deserves its own beer. The event grows and changes every year, and this felt like a natural step in that evolution. Also, I may be a bit biased, but it’s a great beer.”

And from today’s press release we learned that the Oregon Brewers Guild has filled the position of its former longtime director, Brian Butenschoen whom abruptly departed the Guild this past fall. Replacing Butenschoen as the Guild’s director are two co-executive directors, the previously mentioned Tony Roberts and Christina LaRue. These two will have big shoes to fill as Butenschoen was well known in the industry and dedicated a staggering amount of his time to the Guild. Also, in today’s press release we learned that membership has dropped by nine breweries, down from 174 to 165 member breweries since this past fall.

Visit the Oregon Brewers Guild Zwickelmania Event Page that will hopefully be updated in time to list all participating Zwickelmania breweries and cities in Oregon’s seven brewing regions. You can also view maps, brewery listings and itineraries that can be viewed online or printed out. Follow the event @OregonCraftBeer on Facebook, Instagram, and Twitter, using the hashtag #Zwickel19.