For the first time since 2011, the American Homebrewers Association National Homebrewers Conference takes place in sunny San Diego. Homebrewers will flock to what has been described as the “hoppiest place on Earth” for three days of homebrewing culture, companionship and competition. Special seminars and events cater to beer enthusiasts and amateur brewers of every level.

The 37th annual conference is also home to the final round of judging in this year’s National Homebrew Competition, the world’s largest beer competition, which recognizes the most outstanding homebrewed beer, mead and cider produced by amateur brewers worldwide. 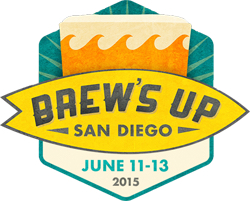 An estimated 4,000 attendees will have the opportunity hear from over 70 presenters, including keynote speaker Tomme Arthur of California-based Port Brewing Company and The Lost Abbey, who is widely regarded as one of the leaders of the American craft brewing renaissance. Presenters include other pioneering and veteran homebrewers, Cicerones, mead makers and more.

This year’s AHA will take place on Thursday, June 11 – Saturday, June 13. Times vary and for a full schedule of events, visit the conference schedule. The location is at Town and Country Resort & Convention Center at 500 Hotel Circle North in San Diego, CA 92108.

The American Homebrewers Association has worked on behalf of the homebrewing community since 1978 and celebrates a membership of more than 44,000 homebrewers and beer enthusiasts. This fun and educational gathering brings together homebrewing fans and friends from across the country to broaden their brewing skills and knowledge, while enhancing the community’s camaraderie.