Part travel show, part competition, Beerland features Golden Road Brewing co-founder Meg Gill as she travels across the country meeting and learning about each of the community’s homebrewers. During each episode Gill explores the brewing season visiting and interview homebrewers while also visiting a few beer spots in the featured locale.

Season Two of Beerland will share stories of an inspiring home brewer living with ALS here in Portland to a father son duo working to revitalize Detroit. Locations in the five episode season include Oregon, Michigan, Florida, Alabama, and capping off with a finale in Los Angeles.

As it relates to Beerland – Season Two, and more importantly today’s premiere of the episode shot here in Portland, here is an interview we conducted with Gill earlier this week.

How did you originally connect with Viceland?
Meg Gill: I was introduced to the President of Vice, Andrew Creighton, through a mutual friend. Andrew loves beer so we connected in LA over some Golden Road Hefeweizen and got to talking, very broadly at first, about potential projects we could do together, a show on Viceland being one of them. Goes to show that good things come from meeting over a few brews!

What did you and the production team learn from the first season to improve for the new season?
MG: The first season was an opportunity for us to experiment with what BEERLAND really was and nail down our vision, as is the case for so many pilot seasons. This time around we went in with a clear definition of the shows identity so we had more time to dig deeper into the locations we visited and the unique stories the homebrewers had to tell. In the end it led to what I feel is a more impactful, often times heartwarming and emotional, season.

What lured you to film here in the Rose City (Portland)?
MG: Portland was one of the first places we picked for season two. We were interested in exploring how the local homebrewing culture has been impacted by Portland’s long history of craft beer and being labeled “Beervana.” It’s one of the most established craft beer markets in the U.S. so we knew there would be plenty of talented homebrewers to speak to.

Prior to filming here how did you choose the three homebrewers competing for the best tasting home brew?
MG: The casting team does really incredible work. Typically, the casting producers from VICE will connect with the community through homebrewing forums first and then conduct Skype interviews. Sometimes they will even send samples of the home brew to our brewers at Golden Road to ensure the beer itself is top notch. It’s important to strike a balance between finding people with interesting and compelling stories and personalities that are also really talented. Luckily there are plenty of those to go around! All that said, they like to keep the casting process a secret from me so that I go into each meeting completely unbiased and get to meet each home brewer without any preconceived notions.

Who are the homebrewers featured in the upcoming Portland episode?
MG: In Portland I meet with Andrew and Nicole who live at a commune called the “Cascadian Order of Supportive Brewing” and then go out zip lining in the woods with Stephen and Kendra before sampling their killer sake inspired brew. And then there’s Mark Keene who has such an incredible story, it has really stuck with me since filming. Mark was diagnosed with ALS a few years back and his love for brewing keeps him motivated. Even though his physical ability is limited he is an incredibly skilled brewer and works with a couple of buddies who act almost as apprentices. They are learning from Mark, and also allowing Mark to continue pursuing his passion for home brewing.

When did you film this episode in Portland?
MG: We were really lucky to be filming in Portland the week of the solar eclipse on August 21st! I headed out to Crosby Hop Farms and watched the eclipse surrounded by friends, hop bines and good beer. It’s a moment I won’t soon forget.

Beyond what we will season in the upcoming episode what else did you take in while here in Portland?
MG: I had my puppy, a Bernedoodle named Buda, with me so we hit a lot of the dog friendly patios around town for dinners after filming. Lots of local craft beer and places with dog bowls and treats!

Which city has been your most enjoyable to film in?
Meg: I can’t choose just one! Seeing the eclipse at the hop field in Oregon was pretty special…

How were each city chosen to be featured in an episode of Beerland?
MG: We really follow the homebrewers, so we start looking where we feel there will be a great homebrewing story to tell – whether its an area well known for beer or not – and go from there. BEERLAND is all about exploring the community and culture behind beer so when we find that, we go to it.

And to close out, it has been a bit over two years since the sale of your brewery to Anheuser-Busch InBev. What have been the benefits to your brewery from this sale? What have been any negative results from the sale?
MG: Overall it has been far more positive for me and our employees than negative. We have grown tremendously, opened new locations, and have amazing access to resources we didn’t have prior. The only negative aspects would be what you would expect – navigating some internal processes takes a bit more time, but we are working through the challenges and improving processes to help the system for us and for all of our craft partners. 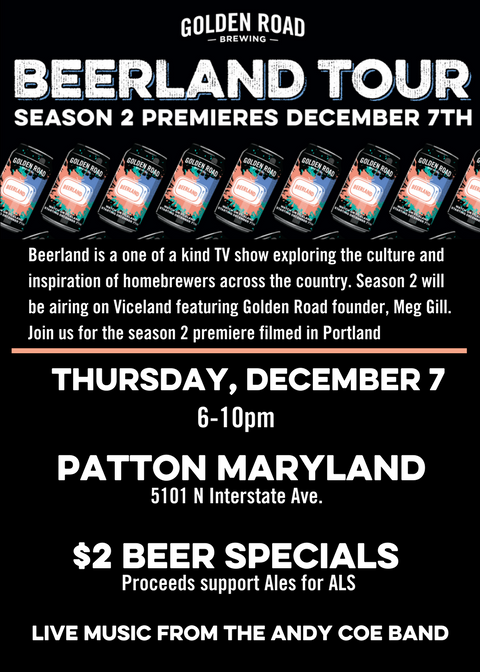 From 6:00-10:00pm tonight, Patton Maryland will be hosting the Beerland – Season 2 Party. Here there will be $2.00 beer specials with proceeds supporting Ales of ALS, plus live music from The Andy Coe Band. Patton Maryland is located at 5101 N. Interstate Ave., Portland, OR.