One of the highlights of the craft beer industry is the camaraderie of the individuals in this industry. Like no other industry various breweries always come to the aid of others whether it be a shortage of a specific hop, a keg cleaner going down or just some assistance in making a beer become that much greater. This industry also comes to the aid of others when life throws them in another direction. One person that led this compassionate lifestyle was Glen Hay Falconer.

Since Glen’s untimely passing in 2002, his brother Quentin Falconer has graciously kept his brothers dream of brewing alive by taking on the Glen Hay Falconer Foundation. This brewing foundation has now raised money that continues to help supply brewing scholarships to many aspiring brewers.

We are off to a great 2015 at the Glen Hay Falconer Foundation. But we wanted to review the phenomenal year we had in 2014. During the year 2014, we celebrated the second decade of our brewing scholarship program. Since we began back in 2005, we have now granted a total of 28 brewing scholarships. The spirit of Sasquatch is as strong as ever, as witnessed by thousands of revelers at the Sasquatch Brew Fest in Eugene and by the faithful making their annual pilgrimage to the Sasquatch BrewAm in the Portland area.

2014 BREWING SCHOLARSHIPS
For the third year running, we offered a truly huge scholarship, a full-tuition grant to the Siebel Institute’s World Brewing Academy (WBA) International Diploma Course in Brewing Technology. The International Diploma Course is a comprehensive program offering students an in-depth understanding of the technical aspects and practical application of brewing science and technology. From an outstanding group of talented applicants, Josh Waldman of Elysian Brewing (Seattle, WA) prevailed and attended this amazing program which took place over a 12-week period from September to November 2014 at the Siebel Institute in Chicago and the Doemens Academy campus in Munich, Germany.

We started our scholarship program with Seibel’s WBA Concise Course in Brewing Technology and continued that tradition for the 11th year in a row. The Concise Course is a two-week intensive course that covers every topic critical to successful brewery operations. Richard Mergens of Mac & Jack’s Brewery and Hi-Fi Brewing (Redmond, WA) was the deserving recipient of that very popular scholarship and attended the course in Chicago in October 2014. The expanded geographic span for both the Siebel scholarships now delivers our scholarship program to over half of the country.

We entered our sixth year of collaboration with the American Brewers Guild by again offering a full scholarship to the Intensive Brewing Science & Engineering (IBS&E) course. ABG’s IBS&E course is a 22-week distance education program with a final week of residential instruction in Vermont and is among the most sought-after of brewing courses available. Matt Cook of Odin Brewing (Seattle, WA) was the impressive recipient of the ABG scholarship.

Join us in congratulating Josh, Richard, and Matt on their accomplishments and new horizons and in thanking the two scholarship selection committees for their tireless energy and enthusiasm. Thank you to the great folks at Siebel Institute and American Brewers Guild whose commitment to brewing education and long-standing collaboration and support for our scholarship program truly benefits all of us.

The Sasquatch Legacy Project is an opportunity not only to showcase the talent and accomplishments of the Foundation scholarship recipients but also to highlight the spirit of collaboration and common purpose, a theme that weaved through Glen’s life. We are truly fortunate to have Glen’s good friend Jamie and his talented Ninkasi team leading the charge and taking the Sasquatch Legacy Project to a new level. And thanks to each of you who purchased a pint or two of this worthy brew. 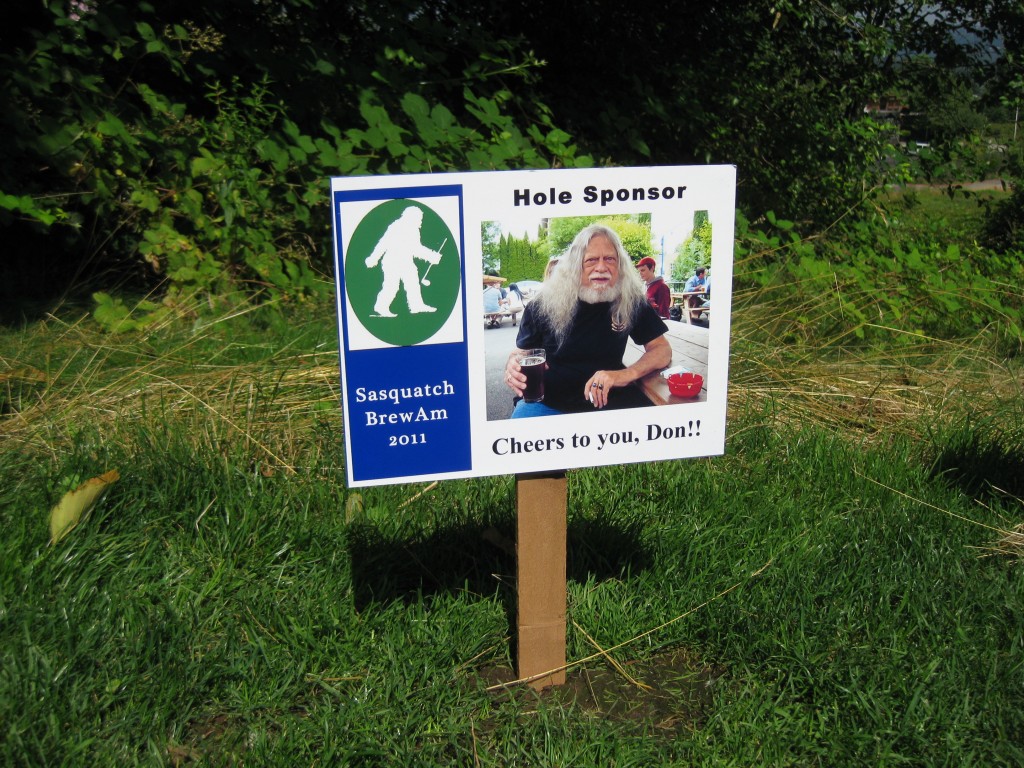 TENTH ANNUAL SASQUATCH BREWAM
In July 2014, celebrity brewers and their adoring fans again paired up to tee off at the McMenamins Edgefield Pub Course just outside of Portland for the annual Sasquatch BrewAm golf tournament. This was a banner year for the BrewAm, as it celebrated its tenth sold-out year. There were lots of very cool Sassy golfer logo items for all but especially for the regulars who make the BrewAm a true brewunion. In addition to some not-so-serious golf, everyone was treated to a fun morning in the Oregon sun, plenty of great craft beer, cool beer games and golf challenges along the course. Thanks to all the hole sponsors, participating brewers, golfers, and beer fans who made the day such a success.  If you’ve never experienced the BrewAm, come out and join the many regulars who revel in the fun and sun each year.

HOPUNION FALCONER’S FLIGHT® HOP
In 2010, Hopunion released Falconer’s Flight®, an exclusive proprietary hop blend created to honor and support the legacy of Glen Hay Falconer. The success of Falconer’s Flight® is simply spectacular, certainly beyond anyone’s expectations and a testament to the sheer brilliance of the unique hop blend and the harmonious chord it struck in brewers and beer lovers worldwide. Since its release, hundreds of breweries and untold thousands of homebrewers around the world have used Falconer’s Flight® in their beers.

The Foundation is truly grateful to everyone at Hopunion for the creativity and execution of the Falconer’s Flight® project, for its commitment to Foundation, and for providing the significant resources to underwrite the continued expansion of our scholarship program.

GENEROUS FUNDRAISERS
What makes the Sasquatch story so special is the energy and enthusiasm around brewing education that is at the core of our mission. We are so grateful to the business and individuals who took it upon themselves to host events to bring attention to and generate proceeds for the Foundation’s scholarship program. Such examples are Heart of the Valley Homebrewers generous annual donation from their “Septembeerest”, Rogue’s Big Ass Barrel Glen Ale release, Plank Town’s multi-brewery Cask Ale Festival, and the Eastern Oregon Beer Festival’s silent auction. We all raise a toast to you!!

WHAT IS IN STORE FOR 2015
If you are an aspiring or professional brewer, check out our brewing scholarship program with the three full scholarships to the Siebel Institute and American Brewers Guild. Capture the opportunity of a lifetime and live your dreams! The Siebel scholarship application deadline is fast approaching. Apply now!! Check out our website for more complete information on the scholarships.

The 11th annual Sasquatch BrewAm will take place at McMenamins Edgefield in Troutdale, OR on Friday, July 24, 2015. Come hang out with brewer celebrities and enjoy the party! Sign-up now on our website.

Thank you for your continuing interest, encouragement, and support. Cheers to you!