The project was spearheaded by Christian Ettinger, owner of Hopworks Urban Brewery, where reducing waste is integral to the company’s mission and a significant part of its B Corp commitment. Ettinger leads the sustainability committee of the Oregon Brewers’ Guild and was seeking opportunities that would impact the industry beyond his own company walls.

“As an eco-freak, I’m always looking for ways to reduce our solid waste,” said Ettinger. “Plastics are unique in that they are widely used, but rarely recycled properly, so it made sense to look at our plastic waste for opportunities to do better. Grain bags are sturdy and useful, and they deserve to be recycled rather than discarded after a single use. Thanks to our partnership with GWM and Vancouver Plastics, I am super excited that we finally have a simple, effective way to recycle malt bags!”

An average Pacific Northwest brewery uses approximately 1000 malt bags annually. These #5 polypropylene bags typically become landfill waste, with no viable recycling option until now. With this program’s launch, CMG and GWM collect the used bags and deliver them to Vancouver Plastics, where they are processed so that they can be upcycled in future plastic items – including new malt bags – helping to close the recycling loop and reduce environmental impact.

“As craft brewers, it is imperative that we do our part to protect our planet, and recycling as much as possible is a significant part of that responsibility,” continued Ettinger. “From the oceans to the landfill, we need to recover as much material for reuse as possible.”

“We’re thrilled to offer this simple, straightforward service to brewers in the Portland and Vancouver area,” said Bryan Bechard, founder of Country Malt Group and president of warehouse and distribution for United Malt Group. “This partnership is the third of its kind for Country Malt Group and one we hope to replicate in as many of our locations across North America as possible. Integrating sustainable solutions into everyday operations, making them easily accessible to customers, and forming strong partnerships – like this one with HUB – are critical to reducing the environmental impact of our industry.”

Free pick-up of the used bags is provided to CMG and GWM customers within the dedicated hot truck radius. While CMG and GWM customers account for a large percentage of the region’s breweries and distilleries, those that don’t use their malt can drop off their own rolled-up “logs” of bags by appointment at the CMG distribution center in Vancouver, Washington. 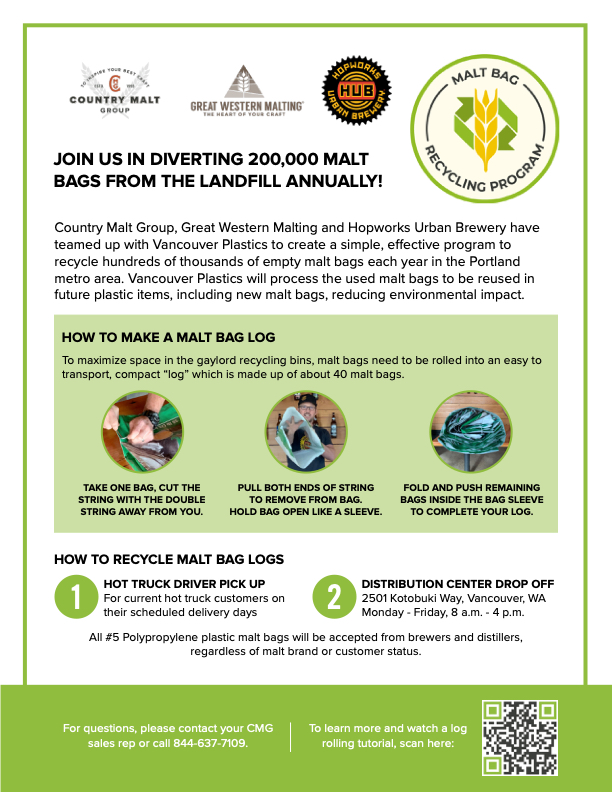 ABOUT HOPWORKS URBAN BREWERY
Founded in Portland, Oregon, in 2008 by Christian and Brandie Ettinger, Hopworks Urban Brewery creates world-class beer and food with sustainable business practices that protect the environment and support our community. Family-owned and operated, Hopworks sources thoughtfully, operates efficiently and minimizes waste in an effort to protect the planet. The company’s 20-barrel brewery produces 10,000 barrels of beer a year for Hopworks’ brewpubs and distribution throughout Cascadia. Hopworks is the first Certified B Corporation brewery in the Pacific Northwest.