How much more Portland could it get than handmade beer and bikes? Well, you could probably work beards into the celebration, but this will do nicely to bring together a couple of Portland’s favorite avocations for one weekend party, and a family-friendly at that. The festival features more than thirty custom bike-frame builders showcasing their handmade bicycles, local brewers pouring refreshing hand-crafted beer, bike performances, live music, local food vendors and fun and games for all. 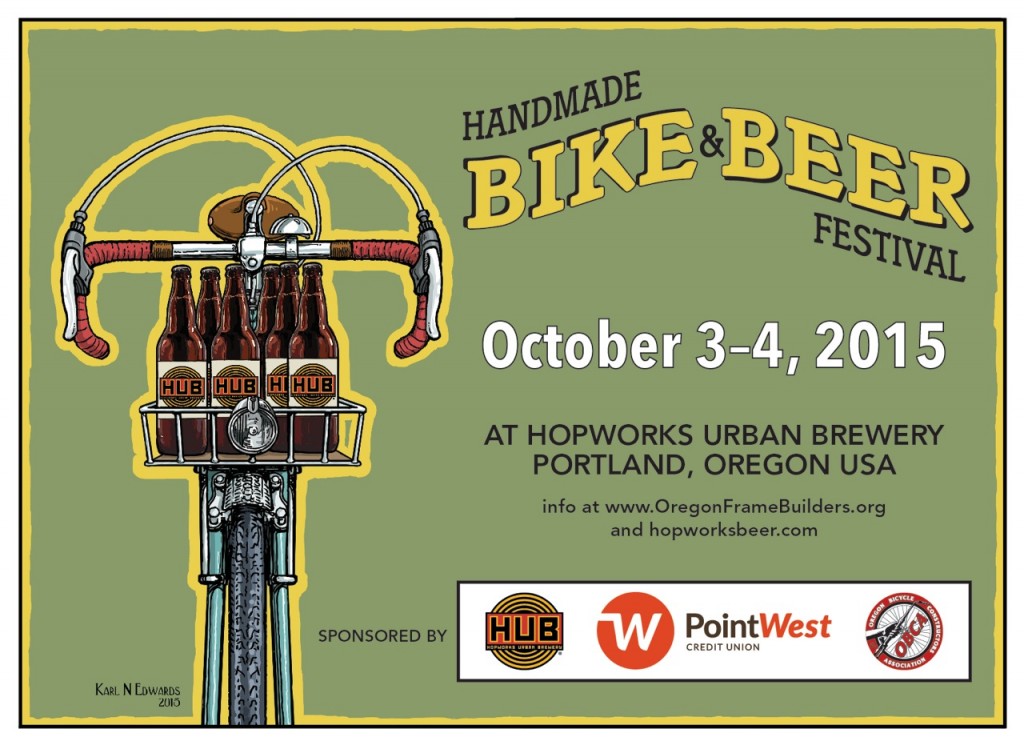 What a great idea for a beer festival: Pro brewers and home brewers team up to create never-been-brewed beers, such as this year’s English Imperial Brown Stout brewed by David Vohden of 13 Virtues and beer judge/homebrewer Bill Schneller. That’s just one of the 21 beers you’ll taste Saturday –and vote on for to determine the best. Also: music by DJ Short Change, vendor booths and the Retro Gaming Lounge, courtesy of Ground Kontrol Classic Arcade and Portland Retro Gaming Expo.

The Oregon Cheese Guild and Rogue Ales & Spirits host a farmer’s-market-style event that gives you the opportunity to meet the northwest’s finest artisan cheesemakers and sample and purchase their cheeses. The Wedge also feature s more than 60 beers and ciders on tap, and local wine. This kid- and dog-friendly event has cheese wheel bowling, cheesemaking and pairing classes, music and more.

What could be better, a scenic drive to McMinnville and some fine Heater Allen lagers at the end of it. Heater Allen is just one of the participating breweries and proceeds will benefit the McMinnville Education Foundation.

Taste Sam Adams latest barrel-aged beer, about which they have this to say: “Originally a French term used to describe wine vintages, when used in the context of beer, ‘Grand Cru’ has come to denote a brew that is the ‘best of the best.’ When crafting Kosmic Mother Funk Grand Cru, the brewers at Samuel Adams aimed to create a unique beer unlike anything they had barrel-aged before. At 6.5 percent, KMF Grand Cru is a wild, funky and complex ale aged for just over a year, with a depth of flavors ranging from earthy and spicy to floral and sweet.”

Cascade is known nationwide for its innovative, blended sour beers, but five years ago it was an unproven concept. Take the fact that they moved most barrel storage, fermenting, aging and blending to a big new production facility and are opening up the former production side to give the pub and kitchen more room a sign that their confidence in the beers has been repaid. They’ll offer 10 vintage beers from the early years – two vintage beers from the cellar a day, which will remain on tap until they run out. The roster includes ’08 Sang Noir, ’08 Apricot, ’09 Vlad, ’09 Vine, ’09 Sang Royal, ’09 Kriek, ’09 Bourbonic Plague, ’09 Blackberry, ’09 Sang Rouge & ’09 Noyaux, plus $5 food specials and vintage bottles for sale.
There will also be a special anniversary toast and tapping of Cherry Bourbon Double Red – a replica of the very first LIVE barrel – with Cascade Brewing founder Art Larrance and Brewmaster Ron Gansberg on Friday Oct.9 at 6 p.m.

Planktown brewer Steve Van Rossem will be showcasing his beers, including Lost City IPA, Ace of Hops Fresh Hop, Oktoberfest and a Firkin of Hobbit’s Habbit Old will be on the bar