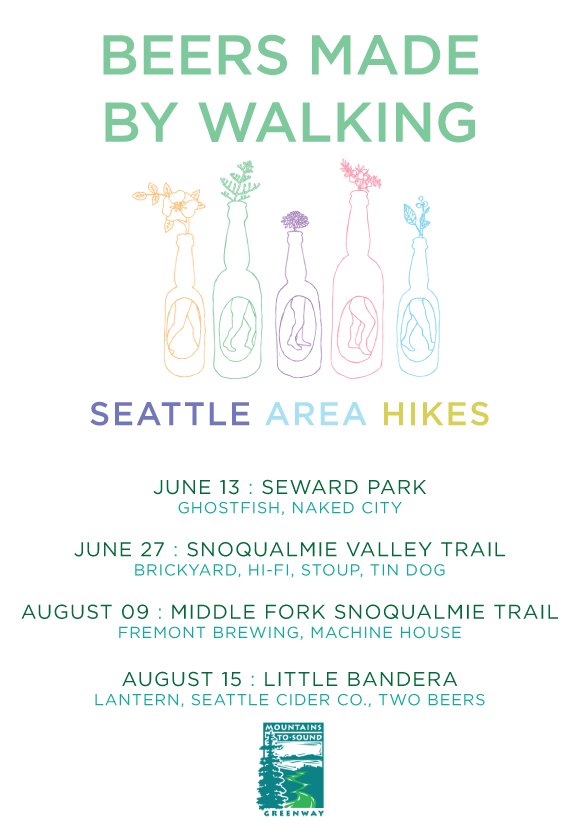 Returning for another season to the Seattle area is Beers Made By Walking. This series of hikes pairs hikers with local brewers to learn about the outdoors and the ingredients that can be gathered to be used in a forthcoming beer. For 2015, Beers Made By Walking has partnered with Mountains to Sound Greenway to host a series of public hikes with brewers for the summer. Four hikes with eleven brewers take place from June through August along the Mountains to Sound Greenway corridor, beginning with the first hike on June 13.

Brewers attending hikes are challenged to create a unique, place-based beer that serves as a drinkable, landscape portrait of the trails that are walked. The resulting beers will be served at a special event in the Fall, in Seattle, and proceeds from the beer will benefit Mountains to Sound Greenway.

August 9, 9am- Middle Fork Snoqualmie Trail
Register Here
Breweries: Fremont Brewing, Machine House Brewery
Description: Hike the Middle Fork Snoqualmie Trail with Mountains to Sound Greenway and Fremont Brewing. This trail follows the Snoqualmie River under dense tree cover, through old-growth forests with fern undergrowth. Watch for wildlife along the river. Make sure to wear sturdy footwear as there is some rocky terrain.

August 15, 9am – Little Bandera
Register Here
Breweries: Two Beers Brewing, Seattle Cider Company, Lantern Brewing
Description: Come hike Little Bandera with Mountains to Sound Greenway and Seattle area breweries. This hike is the most difficult in the Seattle program, but the views from Little Bandera are worth the effort. Take in views of Mt. Rainier and the valley below, as we learn about local flora. Wear sturdy footwear and bring plenty of water.