Hailing from Watou, Belgium in West Flanders, St. Bernardus is recognized as one of the world’s best breweries. Its most popular beer is its St. Bernardus Abt 12 and on Friday, December 8, 2017, Bazi Bierbrasserie will host a special vertical flight of four vintages from 6:00-10:00pm.

St. Bernardus Abt 12 Magnum Edition Vertical Flight will include vintages from 2013, 2014, 2015 and 2016. St. Bernardus Abt 12 is an Abbey ale brewed in the classic ‘Quadrupel’ style of Belgium’s best Abbey Ales. Dark with a full, ivory-colored head. It has a fruity aroma, full of complex flavors and excels because of its long bittersweet finish with a hoppy bite. (10% ABV) 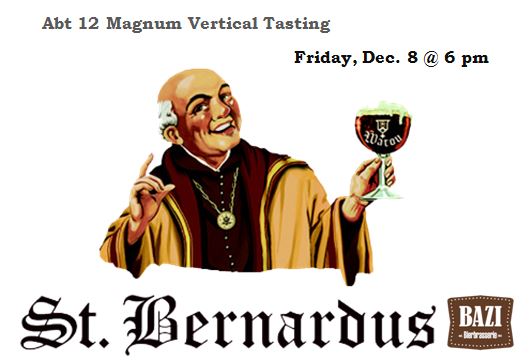 Worldwide seen as one of the best beers in the world. It’s a very balanced beer, with a full-bodied taste and a perfect equilibrium between malty, bitter and sweet. One of the original recipes from the days of license-brewing for the Trappist monks of Westvleteren.

The $18.00 tasting will include 4 oz pours of each vintage of Abt 12 year plus a welcome pour of St. Bernardus Christmas.

Due to the limited magnum edition bottles, only 50 seats are available and pre-purchase is recommended via Eventbrite. Participants may choose to arrive any time between 6:00-10:00pm but just do not rely on waiting to the day of to purchase as last year this fun evening sold out.