Nine months ago the groundwork was laid with Coleman Agriculture, Oregon State University and Red Hill Soils to begin the long road of studying this potential phenomenon. This team of farmers and scientists decided on studying two hop varieties, Sterling and Centennial, across four hop fields that are owned by Coleman Agriculture. The goal of this study is to determine if terroir can distinguish one hop growing region from another.

On August 9th, Coleman Agriculture hosted Bine to Beer: Coleman Hop Terroir to a select group of industry professionals, including brewers, industry professionals, media, scientists and neighboring farmers at its Alluvial Farm located just outside of Independence. There, six members of Coleman Agriculture, three scientists from OSU and a scientist from Red Hill Soils discussed their findings from the nearly yearlong study of the effects of terroir on the flavor profile of hops.

Merriam-Webster defines Terroir [ter-wahr] as the combination of factors including soil, climate, and sunlight that gives wine grapes their distinctive character. But for this study on the terroir of hops, this team defined terroir as the unique soil composition, climate, and cultural practices that may impact the flavor and aroma of hops.

This Hop Terroir study was based upon the initial results of the partnership, learning that there is a measurable, perceptible difference in the beers brewed from hops grown in different locations and soil types. This work is the first step toward determining exactly how to manage the crop to produce the most desirable hops with specific traits.

But to get to where the study began one needs to know a bit more about the hop plant itself. Dr. Townsend mentioned to us that there are approximately 30,000 genes in one hop plant, that’s 5,000 more than in a human body. Then to study a new hop variety, this can take many years.

“Plant breeding is both and art and science,” stated Dr. Townsend. Take for example the new Strata hop. This hop began as a seed in 2009, then known as Experimental #331, and was released to the market to Indie Hops nine years later in 2018.

“Growing hops and brewing beer are each an intricate blend of science and art, and we know intuitively that the flavor of hops can vary from field to field, and that some beers have a distinctive taste that could only have been created by hops from a specific yard,” said John Coleman, farmer and partner at Coleman Agriculture, in a statement. “This study validates what so many of us farmers and brewers have instinctively known—that there are differences, and that they matter. But now we’ve started to learn why those differences exist.”

Since this was the first study of the terroir of hops, the team chose to study two different varietals of hops, Sterling and Centennial, grown across four different locations in the Willamette Valley and two main types of soil. These soil types were from the Missoula Flood Silts and Stratified River Alluvium. In both of these flood plains one of the things first noticed was the different rocks that were a result from the glacial landforms. This is where Andy Gallagher’s expertise came in to the study, as his company, Red Hill Soils, has been working with vineyards for many years now and is excited to expand his resume to include hop growers.

For this study the scientists analyzed the physical and chemical characteristics of the soil, the climate and weather conditions over the course of the growing season, the crop management techniques employed, and the chemistry of the hops grown there. A sensory panel was conducted to evaluate perceptible differences among the beers brewed with hops from each location studied.

“The most important thing we learned is that terroir does measurably affect the hops,” said OSU Professor of Fermentation Science Dr. Tom Shellhammer, who led the scientific team’s efforts. “There are differences in soil, climate and hop chemistry, and we can even taste the difference in the beers brewed from these hops. In this study, we found that the differences between Sterling hops from different locations were more muted and nuanced, and in the Centennial hops the differences were clearer and more easily identifiable.”

During this symposium we toured the Alluvial hop farm where Coleman set up a few educational stations. One such station was serving two Centennial single hop beers brewed at OSU on the school’s pilot brewhouse. One beer featured the Centennial hop grown on the Alluvial Farm in Independence while the other beer had its Centennial hop grown on the Home Farm near St. Paul. Other than the location of where the hop was grown, both beers were brewed with the same ingredients and recipe.

The result of this study was noticeable. Centennial 008, grown at the Alluvial Farm, offered up a bit more of a spice character than expected. Whereas Centennial 307 that was grown at the Home Farm offered up citrus aromas and  flavors, just what’s expected from the Centennial hop. It was an interesting preliminary evaluation of how the terroir can affect hops that are used in brewing. Can we definitively state that its only the terroir that made this difference in each of the two Centennial hops used? No, but it’s an excellent starting point to gain more knowledge during future studies.

“This isn’t the end of the story, it just verifies that there is something there worth investigating,” added Dr. Shellhammer, in a statement. “The next part of the journey is to dig deeper, both metaphorically and literally, to find out what drives these differences and how we can manipulate them to achieve specific results.” 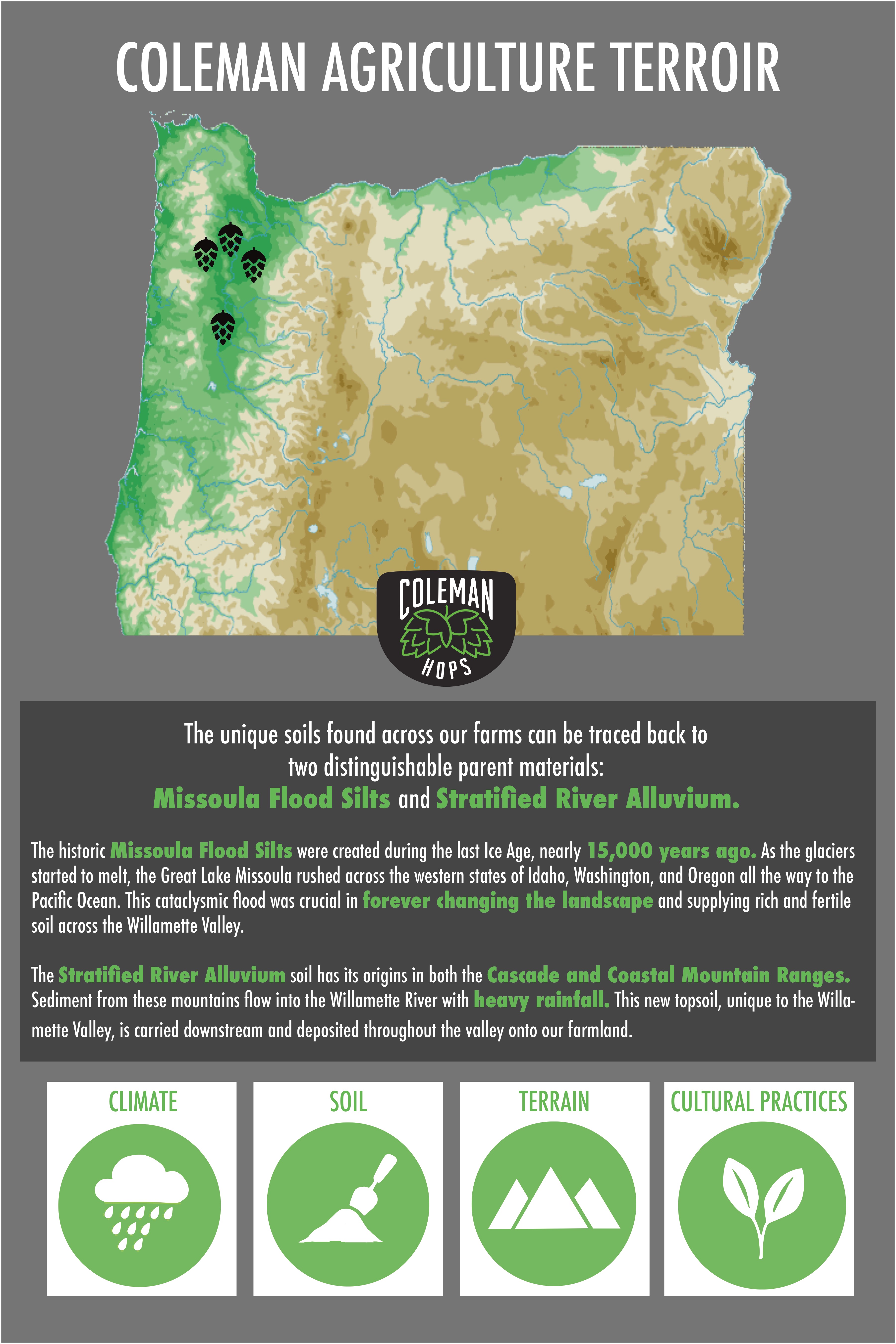 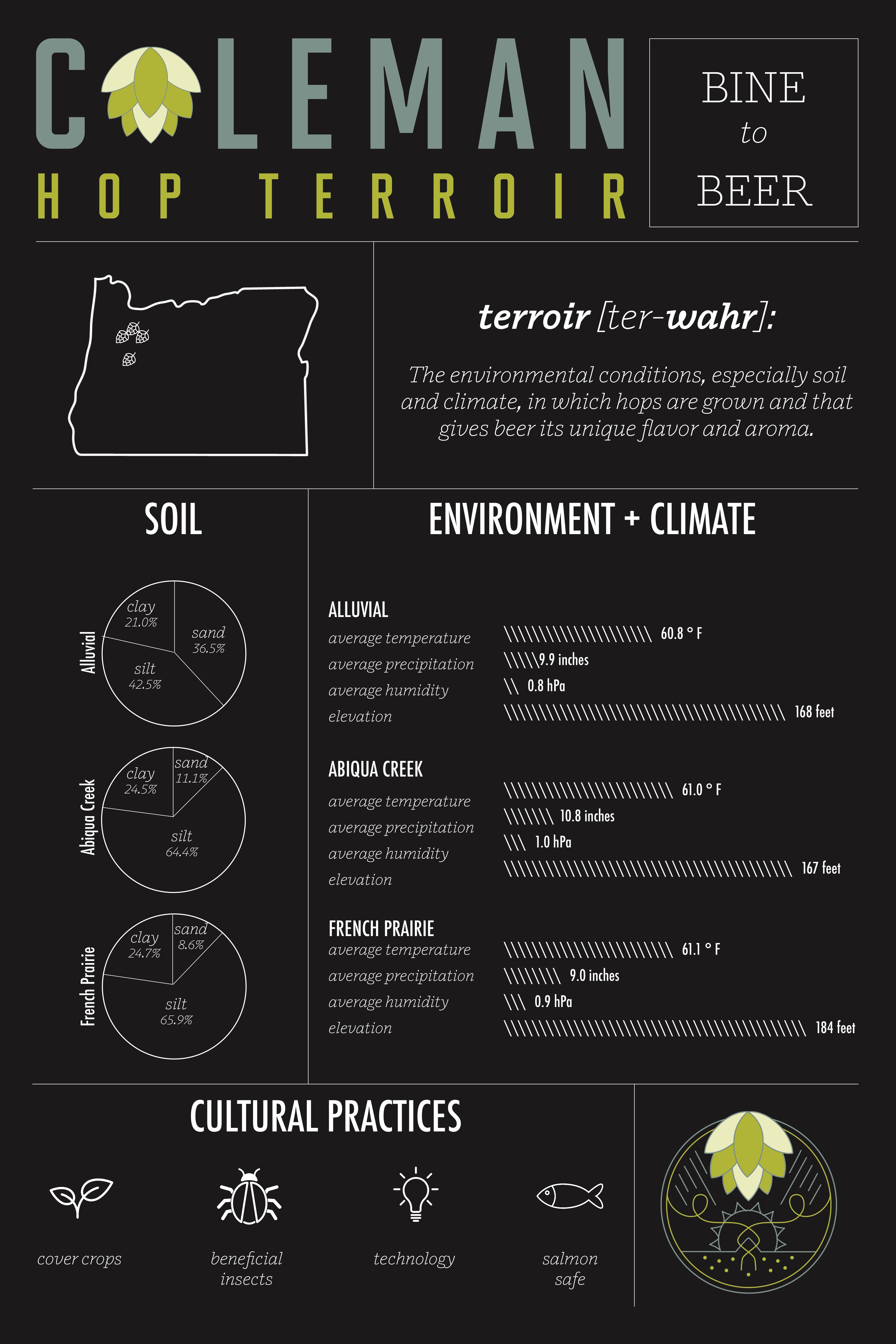 Later this year, Coleman Agriculture and OSU will release the full study results publicly and have also announced their intent to launch the second phase of the study in the months ahead.

“This is only the beginning of an exciting movement for the entire beer industry, with the potential to benefit hop farmers, brokers, brewers and beer enthusiasts worldwide,” said Liz Coleman, Terroir Project Lead, in a statement. “The work we’ve done here is a great example of all boats rising with the tide. Together, as those of us in the industry continue to learn and share research into terroir’s impact on hops, we will position Oregon as one of the world’s premier sources for high-quality hops and brews. And that’s good for everyone who loves beer.”

Coleman Agriculture is a 6th generation family owned and operated farm with headquarters just south of St. Paul, Oregon. They utilize four hop fields located throughout the Willamette Valley in Independence, St. Paul, Mt. Angel and Keizer. With over 2 million pounds from 24 distinct varieties of hops across 2400 acres, Coleman is the largest hop grower in Oregon.

When it comes to its hop partners, Coleman works with Hopsteiner, Yakima Chief Hops and Indie Hops. Coleman was also the farm that established the Strata hop, aka Experimental #331 that has been used in Wolf Picker Experimental IPA from Odell Brewing and Strata IPA from Worthy Brewing to name a few.