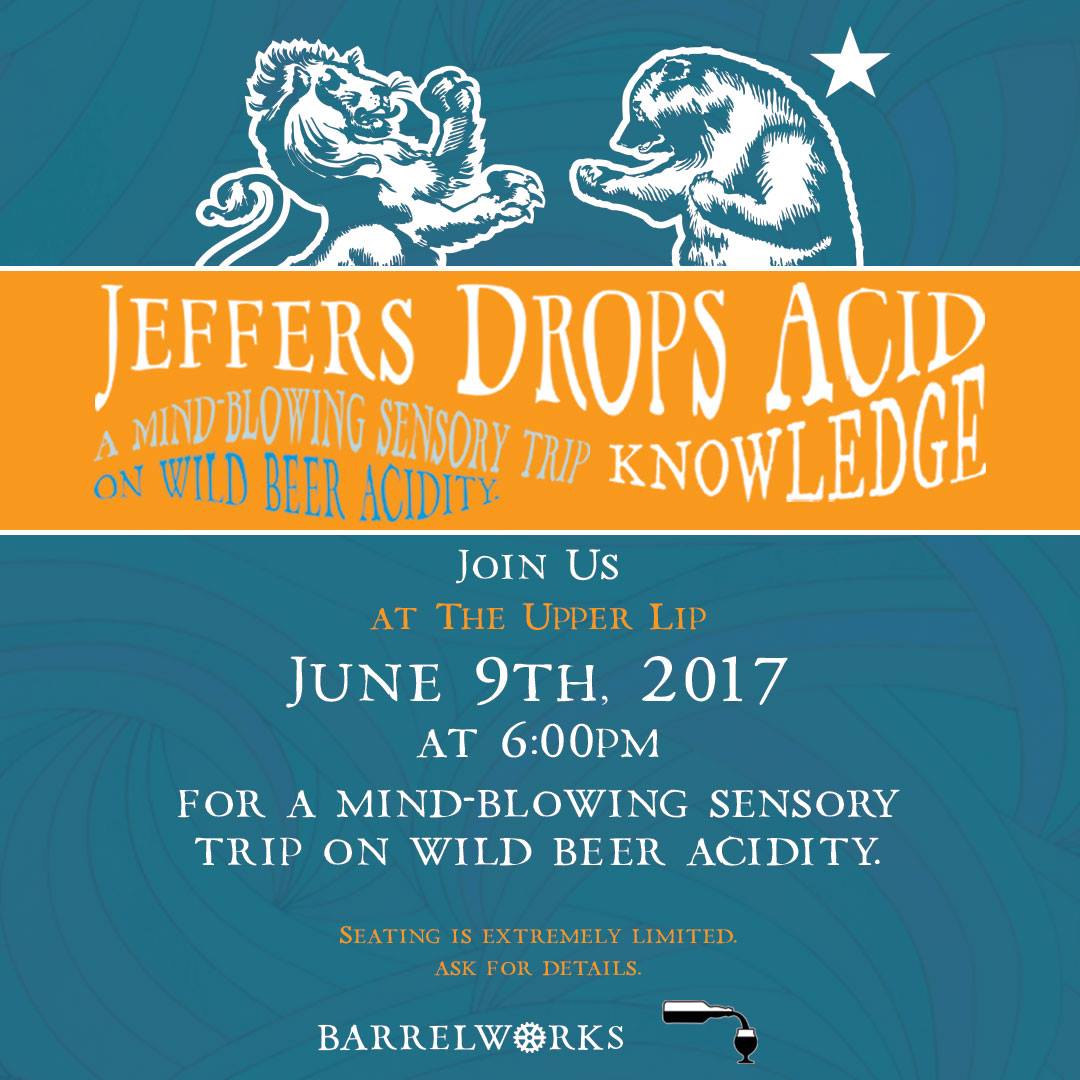 When Adam Firestone and David Walker founded Firestone Walker Brewing Company in 1996 the two business partners and brothers-in-law reached out to Jeffers Richardson to become the brewery’s first brewmaster. He held this position for four years until moving on from the brewery.

Then in 2012 Firestone Walker decided to expand its barrel-aging program to a larger facility where wild yeast beers would reign supreme. And to lead this program David Walker reached back out to his old friend Jeffers Richardson. This facility, Barrelworks opened a year later in Buellton, about 90 minutes south of its production brewery in Paso Robles, California. Ironically Barrelworks sits at the original location of Firestone Walker where Jeffers led its production during its infancy.

This brings us to an event that The Upper Lip will host on Friday, June 9th from 6:00-9:00pm, Jeffers Drops Acid…Knowledge. This three-hour course will teach fans of wild beers in depth knowledge on the popular and intriguing beer style.

After spending the past weekend in Paso Robles to partake in the 6th Annual Firestone Walker Invitational Beer Fest we chatted a bit with Jeffers about his upcoming trip to Portland. He is excited to be offering this course in Portland in its complete glory and exploring the influence that titratable acidity (TA) has in wild, funky beers. This is where Jeffers knowledge of wine making shines through in making these highly sought after beers from Barrelworks.

Acid knowledge, that is.

“When it comes to wild or sour beers, acidity plays more of a role in the taste experience compared to traditional beers, which are more defined by their hop and malt profiles,” Richardson said. “This seminar is designed to explore the role of acidity, and to reveal not only what you are tasting in the beer, but also why.”

The seminar delves into the differences between pH and titratable acidity as well as the sensory relationship between smell and taste. Different concentrations of acetic and lactic acids are tasted, enabling you to discover the signature characteristics of each. Along the way, you learn how each of these acids shapes flavor, mouthfeel and overall perception.

The seminar then ends on a sour note with a special tasting of limited releases from Firestone Walker Barrelworks to test your newfound knowledge and reinforce the lesson.

“The response has been phenomenal,” Richardson said. “Many people are new to wild beers, and this is a really fun way to take a crash course.”

Tickets are extremely limited and can be purchased here at $30. Each ticket includes four 5oz samples of the featured Barrelworks beers.

Along with these four Barrelworks beers The Upper Lip will be pouring Pivo Pils and Luponic Distortion No.006 at an additional charge.