Zwickelmania
11 a.m. – 4 p.m. Saturday Feb. 13, most Oregon breweries & brewpubs; Free. Schedules and shuttle bus info
There are a few ways to experience a working brewery, but only Saturday’s Zwickelmania skips the rubber boots, cleaning beer kegs and schlepping 50-pond sacks of grain. In 2009, the Oregon Brewers Guild held its first statewide brewery open house to celebrate 150 years of Oregon statehood. They called the new event Zwickelmania after the sampling tap on fermenters and tanks that allows brewers and visitors to try a beer while it’s still conditioning – a perfect name that nicely captures the spirit of generosity that prevails among most brewers, who seem always to have a little something special tucked away that they want you to try. This year, Zwickelmaniacs can also sample Oregon beers paired with another Oregon chocolate thanks to special chocolate pop-ups with members of the Portland Chocolate Mob at select breweries in the metro area, which should make the event even more popular: the first year included about three dozen breweries; in 2014, nearly 40,000 people toured 105 participating breweries statewide and Zwickelmania is now firmly enshrined as the most popular day in Oregon beer.

The One Motorcycle Show
6 p.m.-1 a.m. Friday Feb. 12, 11 a.m.-Midnight Saturday Feb. 13, 11 a.m.-3 p.m Sunday Feb. 14, 831 SE Salmon St., free admission.
When we think of Portland as the craftiness capitol of the world, we’re often thinking in terms of beer, coffee, chocolate, great bread, handmade bicycles and guerrilla knitting circles. But there’s a thriving alt motorcycle culture, too, one where coolness can’t be bought in a showroom, where you have to roll your own. Builders take old bikes as a starting point to cut, weld, modify and construct their own personal statements about what a motorcycle should be, whether that be chopper, bobber, cafe racer, rat bike or full-on trailer queen custom. The results are fascinating. Craftmanship ranges from sublime to downright dodgy, and one builder’s dream bike may be a nightmare to the rest of us, but the tenets of DIY/maker society – authenticity, passion, craft, all those fine words – are scrupulously adhered to.

And yes, PBR will likely be the beer of choice. Craft beers are sometimes regarded in this demi-monde as snooty and pretentious, though it seems to me that the principles of craft and authenticity apply equally to both worlds. Whatever the beer on tap, you should check it out – it’s a vivid scene.

Sweet/Tart – A Celebration of the Dark & Sour Sides of Beer
Noon-11 p.m. Saturday Feb. 13-Thursday Feb. 18, Belmont Station, 4500 S.E. Stark St.;
February seems like the perfect month to celebrate both the dark and sweet beers alongside tart and sour ales, so Belmont Station will be featuring four taps of stouts and other dark beers and another four taps pouring sour ales. Grab a flight of your favorite type or one of each and hunker down for this leap year’s extra day of cold and dark days.

Migration Sixth Anniversary
Saturday Feb. 13, Migration Brewing, 2828 N.E. Glisan St.;
As Migration partner Colin Rath puts it, “six years ago we were digging trenches in a heatless building with only a dream guiding the way. In those years we have gone from brewing 250 barrels a year to more than 1400…We were four friends with a vision who have brought our experiences and passion for craft beer together to create a neighborhood-gathering place…” 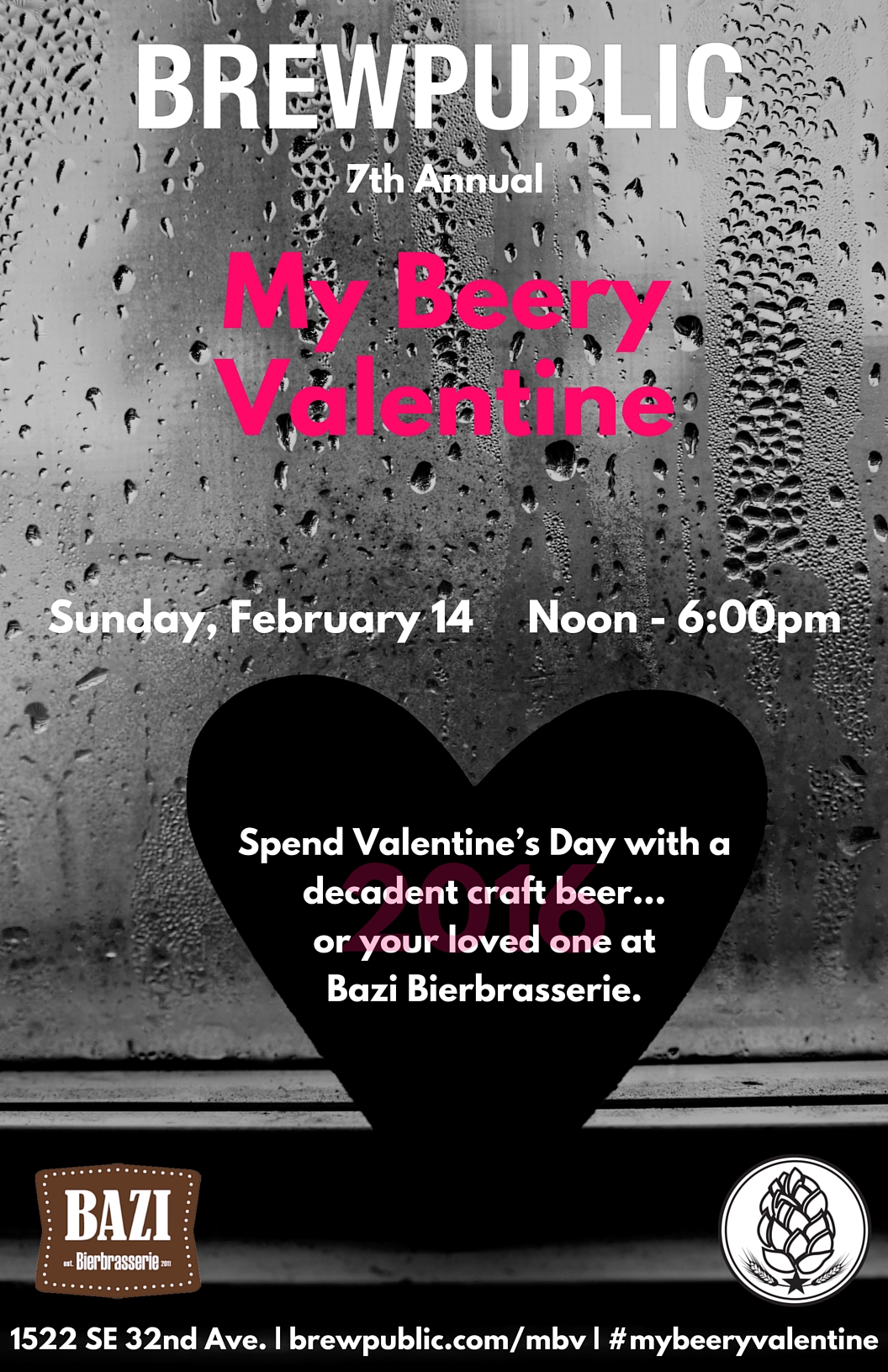 My Beery Valentine VII
Noon-6 p.m. Sunday Feb. 14, Bazi Bierbrasserie, 1522 S.E. 32nd Ave.
Those fine folks at Brewpublic and Bazi bring you the seventh Annual My Beery Valentine because they want you to spend your Valentine’s Day with a great craft beer, crème brulee beer pairing and specialty V Day themed cocktails, so bring someone special or come make new friends because Valentine’s Day is so much better with a beer in hand.

Fort George Stout Month Road Show Celebration
5-7p.m. Thursday Feb. 18, Belmont Station, 4500 S.E. Stark St.;
The Station closes its Sweet/Tart celebration with the help of Fort George bringing its famous Stout Month to Stark Street for a night, They’ll have Cavatica Stout (with some special surprises inside) on the bar top and a couple of their (57!) Festival of the Dark Arts kegs pouring in the taproom.