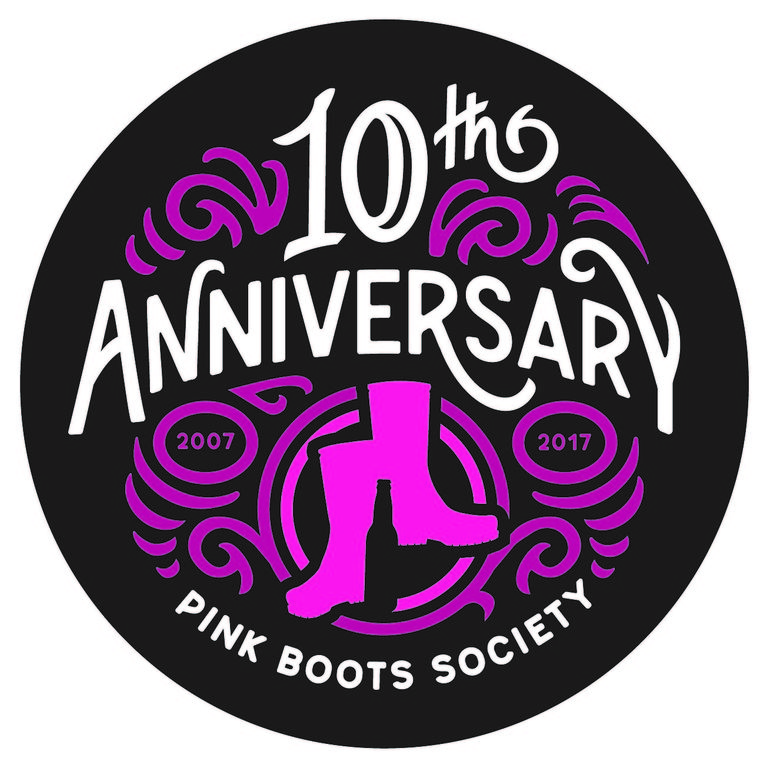 Portland, OR  –  On June 2nd and 3rd, 2017, Pink Boots Society celebrates 10 years of providing myriad educational opportunities that assist, inspire and encourage women in the beer industry to further their careers. To honor its milestone anniversary, this unique international organization for women beer professionals will host its first conference and beer festival in San Diego, California.

“Since Pink Boots Society was founded with a mission to inspire and educate women in the beer industry, we felt hosting an educational conference to celebrate ten years would align perfectly with our core values,” said Laura Ulrich, President of Pink Boots Society, Small Batch Brewer for Stone Brewing. “We’re all especially thrilled to be spending June 2nd and 3rd reflecting on how much our organization has contributed to the industry’s growth and improvement through our membership, regional chapters and scholarship opportunities.”

Conference
The weekend begins on June 2nd with an all-day two track, multi-panel conference focusing on brewing and the business of beer at the historic Lafayette Hotel Swim Club & Bungalows. Open to women in the brewing industry, the conference features presentations by many of the most talented and influential women currently working in the beer community. The lineup of educational seminars covers a diverse array of topics including the Sensory Evaluation of Beer, Fermentation and Yeast; Tap Room Management, Social Media Marketing and more. Registration fees and member exclusive add-ons range from $99 to $170.

Beer Festival
At noon on June 3rd, Pink Boots Society Beer Festival at Ingram Plaza in Liberty Station opens to the beer loving public ready to enjoy a diverse array of beers and what promises to be one of San Diego’s best beer festivals.  The festival runs from 12pm- 4 p.m. Tickets are $45; $60 day of the event; $15 for designated drivers. All proceeds benefit the Pink Boots Society Scholarship Program.

amazing years, we raise our glass to continued success and a fantastic Anniversary Conference and Beer Festival.”

About Pink Boots Society
In 2007, brewmaster Teri Fahrendorf set out on a 139-day gypsy-brewing road trip across the United States with a pair of pink brewing boots given to her by her mother-in-law. During that trip Teri met several women brewers she didn’t know existed, nor did they know of her. Teri’s history as a brewmaster for nineteen years seemed to inspire these women, and their desire for information exchange and mentoring inspired Teri to start building a list of sixty women brewers. That list was the beginning of Pink Boots Society.  The nascent organization’s first meeting was held at the 2008 Craft Brewers Conference.  In the fall of 2008, the thirty five members present voted to make Pink Boots Society a 501(c)(3) open to any woman anywhere in the world who made her income from some aspect of the beer industry.  Pink Boots Society currently has almost 1,100 members.

With the exception of a paid part-time executive director, Pink Boots Society is entirely volunteer run. To fulfill its mission of assisting, inspiring and encouraging women beer professionals through education, the organization provides scholarships, information and meeting opportunities to its members.