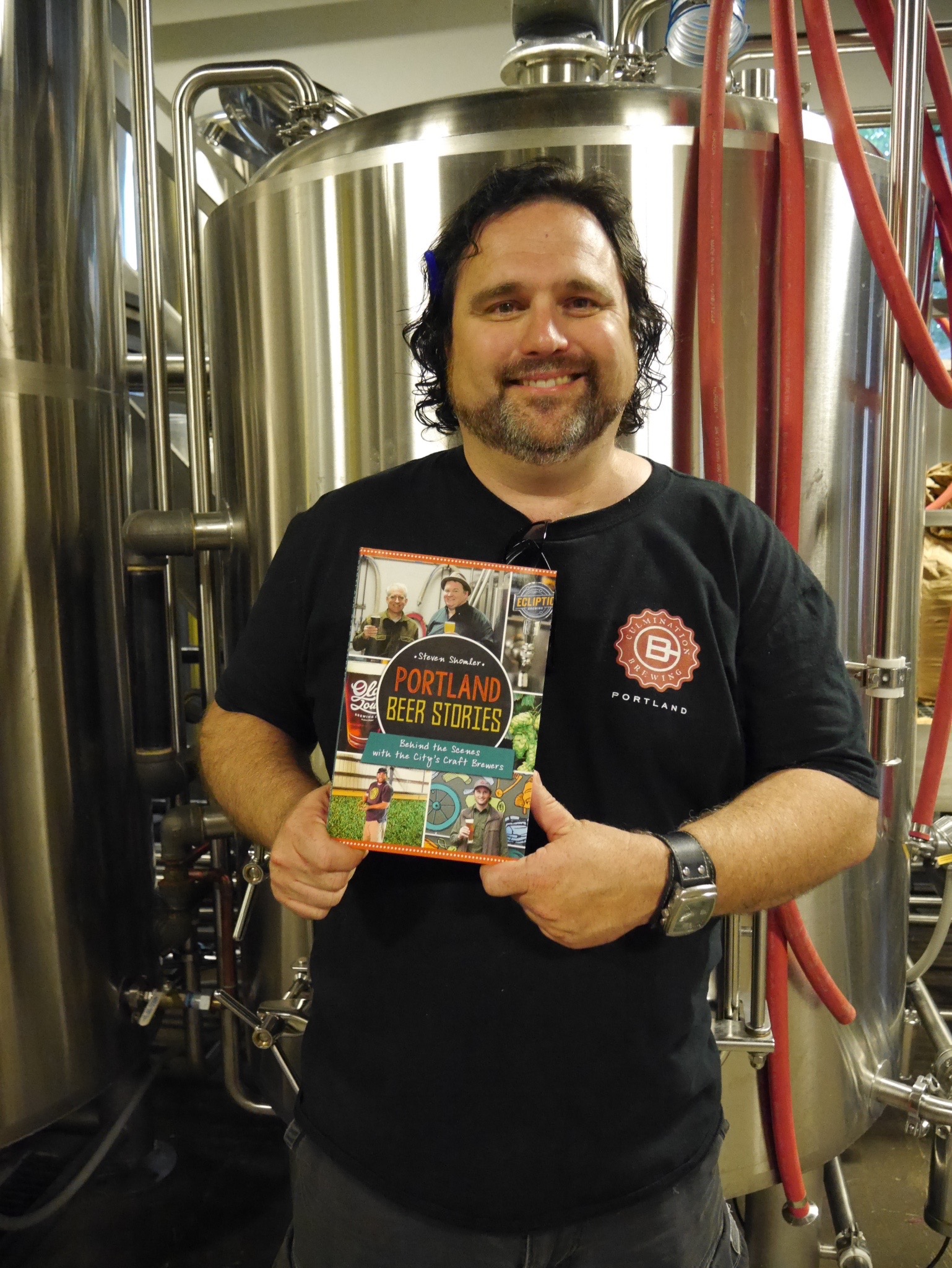 On the heels of last year’s Portland Food Cart Stories, local Portland author Steven Shomler has recently penned his second book, Portland Beer Stories: Behind the Scenes with the City’s Craft Brewers. Published by Arcadia Publishing and The History Press, Portland Beer Stories is now available at local bookstores and online retailers. The book features profiles on 20 Portland breweries, road trips to 9 out of town breweries, beer personalities and more.

After spending 10 years in the mortgage banking world and another 10 years in the nonprofit world, Shomler decided to quit this life and start out fresh as an author. Full of vigor and a solid heart he took the leap into the craft brewing world. His smiling face and positive attitude can be seen at almost every single beer event in Portland that has taken place over the past couple of years.

This major career change is one that is not very easy to make. When asked what advice do you give to one that is considering a career change as you did? Shomler replies, “I have been working many, many hours a week since the summer of 2011 to become a Speaker and an Author. If someone wants to ‘Startup Their Life‘ as I call it, three things come to mind.”

With his first book now behind him, Shomler look at the world of craft brewing to be the theme of his next book. When it came to selecting a writer for the book’s foreword he looked no further than esteemed local beer writer Jeff Alworth. Here it’s laid out on what makes Portland a top city in the world when it comes to beer. The case is made that Portland is right up there next to Munich and others that are always highly regarded. 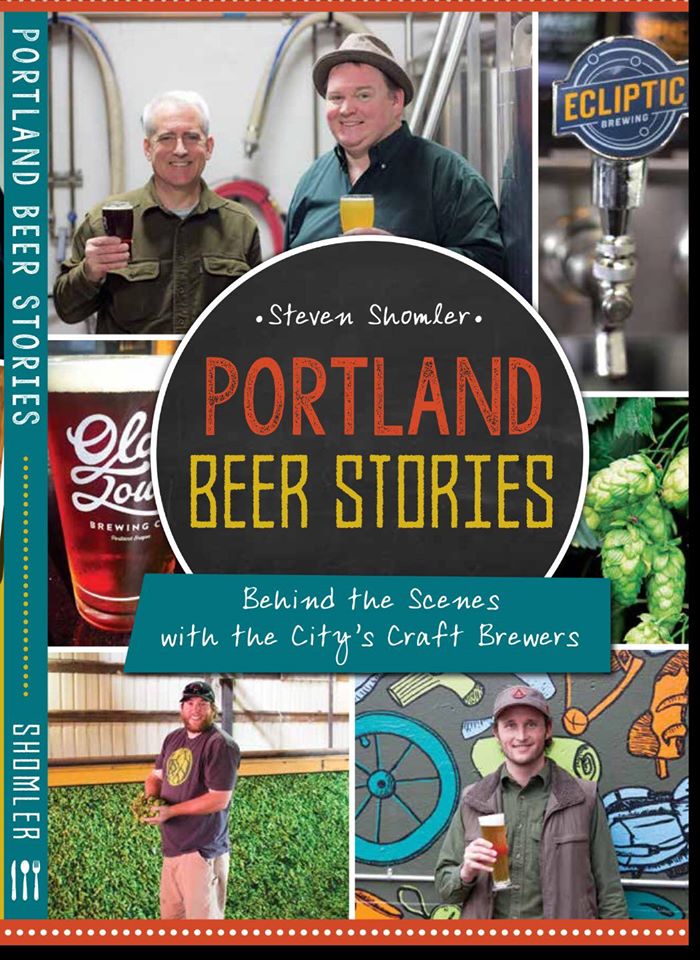 With well over 50 operating breweries here within the city limits of Portland it had to be a difficult decision on which breweries would be included in Portland Beer Stories. Pairing that large number down to one third of the total took some thorough consideration. “There are currently 52 breweries in Portland, and I choose a cross section of older ones, and newer ones. I could have easily covered 20 other Portland breweries and still had a great book with excellent stories,” states Shomler.

The breweries profiled for the book include Base Camp, Breakside, Burnside, Cascade, The Commons, Culmination, Doomsday, Ecliptic, Gigantic, Ground Breaker, Hair of the Dog, Kells, Laurelwood, Lompoc, McMenamins, Old Town, Sasquatch, StormBreaker, Upright, and Widmer. When asked which brewery he really wanted to include in the book but just didn’t make it Shomler replies, “I really wanted to include Hopworks Urban Brewery and it just did not work out. I was very sad about that. Perhaps in Vol 2.”

The stories that Shomler conveys are ones that many craft beer aficionados may be unaware of. He dives behind the beer and writes about more than just the beer these brewers brew. How many know that back in 2010 when Jason McAdam decided to open what is now known as Burnside Brewing was originally going to be named Alchemy Brewing? Since this name was already being used he settled on the more recognizable Burnside Brewing that is now one of the top breweries in the city.

“I was very lucky and each brewer I interviewed was very forthright. They each had struggles and challenges that they faced on their beer journey. I have a lot of material left over and some things that I could use for hush money later. Just kidding. Honest. Please let Dave Fleming know that I will never tell,” jokes Shomler.

In the Road Trip! chapter Shomler takes his readers to six breweries outside of Portland. One of the more popular Portland road trips is venturing out to the Oregon Coast. Here he visits Astoria’s Fort George before heading south to Pelican in Pacific City before landing in Newport for the world renowned Rogue Ales. 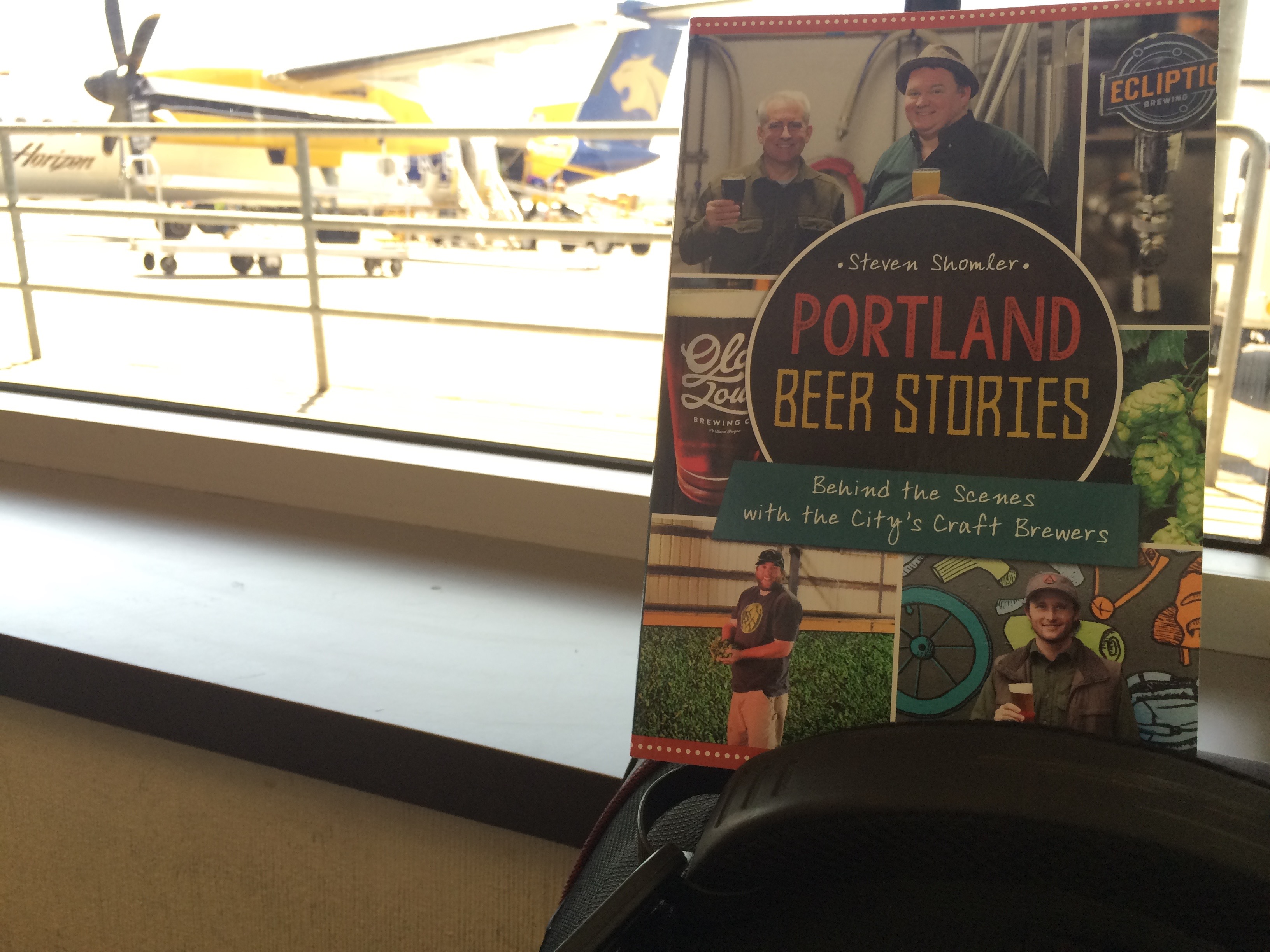 From the coast Shomler heads east to Eugene’s Ninkasi prior to crossing the Cascade Mountains to Bend’s Ale Apothecary and then north to Hood River’s pFriem. He then ventures on a Road Trip north to Washington State to visit Finnriver, a cidery that is making some of the best ciders in the Pacific Northwest.

Shomler even invited a few other beer writers to write a small piece on the Portland beer scene and what are its best attributes. Beyond Alworth’s foreword, a few of these writers include fellow North American Guild of Beer Writers members Brian Yaeger and myself along with a few other local writers. This gives a broader sense of the true beer community that lives and breathes everyday here in Portland.

Shomler closes out Portland Beer Stories reminiscing of his favorite spot in Oregon to relax, take in the scenery and most importantly, have a beer. I cannot argue the beauty of taking in a sunset at Cape Lookout State Park on the Oregon Coast outside of Tillamook. I too have spent some time there taking in the view while savoring an Oregon brewed beer.

So what writing projects are in the works for Shomler? “I would love to write a Portland Beer Stories Vol 2 in the summer and fall of 2017 and see it come out in the spring of 2018.”

“Right now I am finishing up the 2016 Portland Food Carts Calendar with renowned Oregon Photographer Rick Schafer. That wall calendar is set to come out September 2015. My next two culinary books are Oregon Wine Stories: Behind the Scenes with the State’s Winemakers. I have already started on that book and I hope to see it published April 2016, and Portland Coffee Stories and Donut Tales – I will begin writing that book in Feb of 2016 and I hope to see it published spring 2017. I have already begun researching content for that book.”

“I am also working on a book with Culmination Brewing Founder and Brewmaster, Tomas Sluiter titled — Beer Drinkers Cookbook: Styles, Pairings and Recipes, look for that book to come out fall of 2017.” 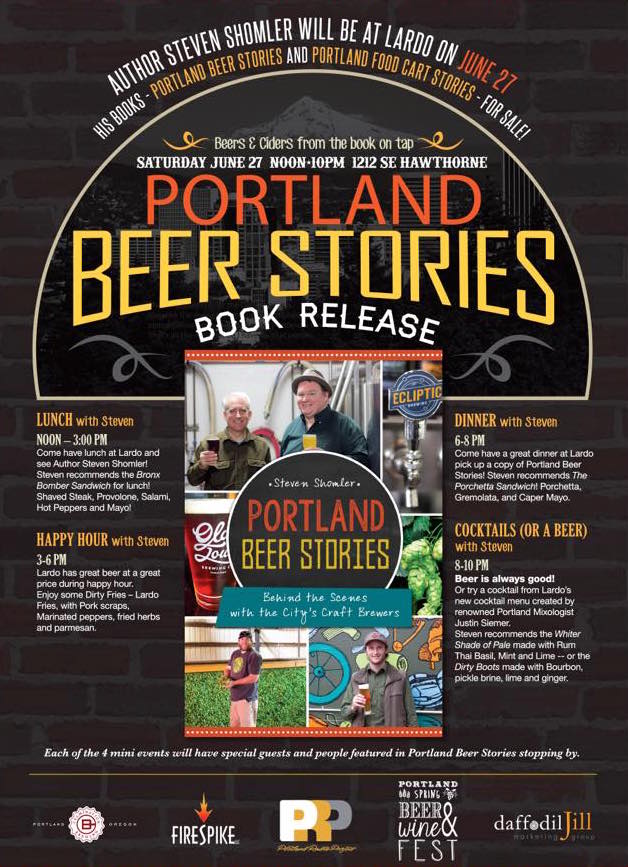 The official book release party for Portland Beer Stories will take place on Saturday, June 27th at Lardo on SE Hawthorne from Noon to 10:00pm. During this daylong launch, Shomler will be offering four different book signing sessions.

Lunch – Noon to 3:00pm
Have lunch at Lardo with the recommended Bronx Bomber Sandwich for lunch of Shaved Steak, Provolone, Salami, Hot Peppers and Mayo!

Happy Hour – 3:00 to 6:00pm
Come get a great beer at a great piece during happy hour ands make sure to get some Dirty Fries – Lardo Fries, with Pork scraps, Marinated peppers, and fried herbs and parmesan.

Dinner – 6:00 to 8:00pm
Dinner at Lardo with the recommended Porchetta Sandwich! Porchetta, Gremolata, and Caper Mayo

Beer and Cocktails – 8:00 to 10:00pm
Beer is always good! However Lardo recently added a new cocktail menu with cocktails created by renowned Portland Mixologist Justin Siemer. Come have a cocktail (or a beer) with Steven. Steven recommends the Whiter Shade of Pale made with Rum Thai Basil, Mint and Lime — or the Dirty Boots made with Bourbon, pickle brine, lime and ginger.

Keep up to date on the release party by following its Facebook event page.