PORTLAND, Ore. – The 10th annual Cheers to Belgian Beers festival has announced the beer lineup for this year’s event, taking place May 13 and May 14 at The North Warehouse, 723 N Tillamook St. Hours are 1 to 9pm on Friday and Noon to 8pm on Saturday.

The festival features up to 70 Belgian-style beers all brewed by Oregon craft brewers, the majority of which use the same single yeast strain: Imperial Organic Yeast 58 Lioness, a yeast that produces white fruit esters that are balanced with clove phenolic aromas.

The list of participating breweries, their beer name and their style follows; this list is continually updated as more breweries sign up. For a complete up to date list, including ABV and yeast strain, please visit this link. 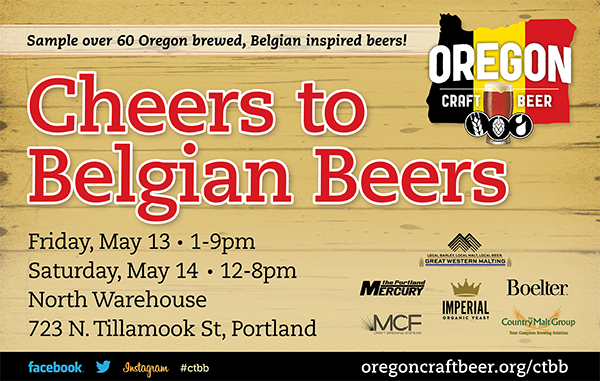 Admission to the event is free. In order to drink, it costs $20 for a souvenir glass tasting goblet and 10 drink tickets. Beers are available by taster only; most beers cost one ticket for a taste, though some may cost double. Additional tasting tickets are available for $1 apiece. Advance tickets are on sale now at http://oregoncraftbeer.org/ctbb. The event is for ages 21 and over.

Cheers to Belgian Beers is sponsored by MCF Craft Brewing Systems, Boelter Beverage, The Country Malt Group, Great Western Malting, Imperial Organic Yeast and Portland Mercury. The event is organized by the Oregon Brewers Guild, a non-profit organization whose mission is to promote the state’s craft brewing industry and the common interests of its members. Founded in 1992, the Oregon Brewers Guild is one of the nation’s oldest craft brewers associations. The Guild, which receives no state funding, comprises 154 brewing companies, 122 associate or supplier members and more than 3,500 enthusiast members or S.N.O.B.s (Supporters of Native Oregon Beer). To learn more, visit www.oregoncraftbeer.org.