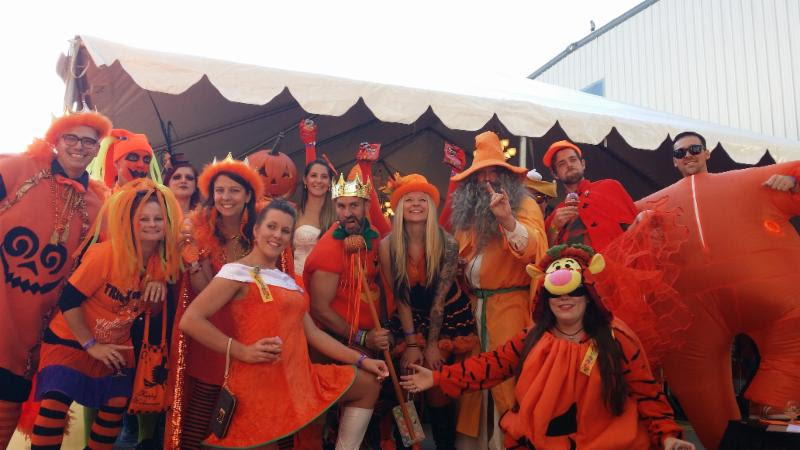 The calendar is about to turn to August so the return of pumpkin beers is imminent. Elysian Brewing, well known for its vast amount and variety of pumpkin beers will soon be releasing its four packaged varieties of pumpkin ales in the coming weeks. Returning for the 2015 season is Night Owl, The Great Pumpkin Imperial Pumpkin Ale, Dark O’ The Moon Pumpkin Stout, and Punkuccino Coffee Pumpkin Ale.

As many cringe to hear that pumpkin beers will be hitting the marketplace when we’re still in the middle of summer, its unfortunately a necessary evil when it comes to the business side of craft brewing when a brewery needs to grab coveted shelf space. The sales window of pumpkin beers is short and after Halloween these beers begin a downward swing.

With the arrivals of these four pumpkin beers also means that Elysian’s annual Great Pumpkin Beer Fest (GPBF) is on the horizon. Returning for its eleventh year, this annual festival will take place on Friday, October 2 and Saturday, October 3 at Elysian’s Airport Way production facility in Seattle’s Georgetown neighborhood. Tickets to this annual event will go on-sale this weekend on Saturday, August 1 and can be obtained by clicking here. Tickets are $28.00 for a one-day pass or $50 for a two-day pass. To avoid service fees pick up your tickets at any of four Elysian Pubs. (For those that cannot make it to Elysian for the GPBF, Brewpublic will host its annual Killer Pumpkin Fest at Green Dragon in Portland, Oregon on Saturday, October 17.)

Elysian will be featuring Night Owl, The Great Pumpkin Imperial Pumpkin Ale, Dark O’ The Moon Pumpkin Stout, and Punkuccino Coffee Pumpkin Ale a part of its nearly 20 different varieties of pumpkin beers during this annual fall tradition. There is no confirmation that Elysian will return with its Budweiser endorsed Gourdgia On My Mind Pecan Peach Pumpkin Amber for this year’s GPBF. However it would be nice to see this beer’s return to this year’s lineup of pumpkin beers.

The GPBF celebrates the gourd with around 80 different pumpkin beers from across the country, the sporadic sounds of Chaotic Noise marching band, KEXP DJs Stevie Zoom and Riz Rollins, games, Pumpkin Royalty, local food trucks, a costume contest, and more. The highlight of the 21+ fest is the tapping of Giant Pumpkins that have been scooped, scorched, filled with beer, sealed, conditioned, and then tapped for all to enjoy.

New to this year’s fall event lineup, on Sunday, September 27 from 11:00am-3:00pm, through the joint efforts of Elysian and Krainick Dairy Farms in Enumclaw, the Great Pumpkin Weigh-Off makes its way to Seattle. This event honors the amazing growers in the region who make it possible for us to feature giant pumpkins and fill them with beer. Giant pumpkins are hauled in, judged, weighed, and prize money is awarded to the winners. This all ages, family-friendly event is an official, sanctioned event by The Great Pumpkin Commonwealth (GPC). Join Elysian and Krainick Dairy Farms in the lot at Elysian’s Airport Way production facility. No tickets are required for this event.

Here are descriptions of the Elysian Pumpkin releases for 2015.

Night Owl Pumpkin Ale
Night Owl is brewed with over 7 lbs. of pumpkin per barrel and includes seven different malt varieties, green and roasted pumpkin seeds, and pumpkin in the mash, boil and fermenter. Bittered with Magnum hops and spiced in conditioning with nutmeg, clove, cinnamon, ginger and allspice. 6.7% ABV
Available :: Aug-Oct on Draft, 22oz Bottles and 12oz – Six Packs

The Great Pumpkin Imperial Pumpkin Ale
The Great Pumpkin was the silver medalist at the 2007 Great American Beer Festival in the Fruit and Vegetable category and was also the world’s first Imperial pumpkin ale. Brewed with Pale, Munich, Cara-Hell, Cara-Vienne, Cara-Munich and Crisp 45° L Crystal malts. Roasted pumpkin seeds in the mash, and extra pumpkin added in the mash, kettle and fermenter. Spiced with cinnamon, nutmeg, cloves and allspice. 8% ABV
Available :: Aug-Oct on Draft & 22oz Bottles

Punkuccino Coffee Pumpkin Ale
A pumpkin ale with the attitude of a world-weary barista, Punkuccino packs a short shot of Stumptown coffee toddy in your pint with just a shake of cinnamon and nutmeg.  Pale, brown, biscuit, C-77 crystal, chocolate and kiln-coffee malts provide the body, German Northern Brewer lends a touch of bitterness, and lactose sweetens just a touch. Three pumpkin additions, in the mash, kettle and fermenter. 6% ABV
Available :: Aug-Oct on Draft & 22oz Bottles

To locate any Elysian Brewing beer check out the brewery’s Beer Finder to help locate Elysian in your neighborhood.