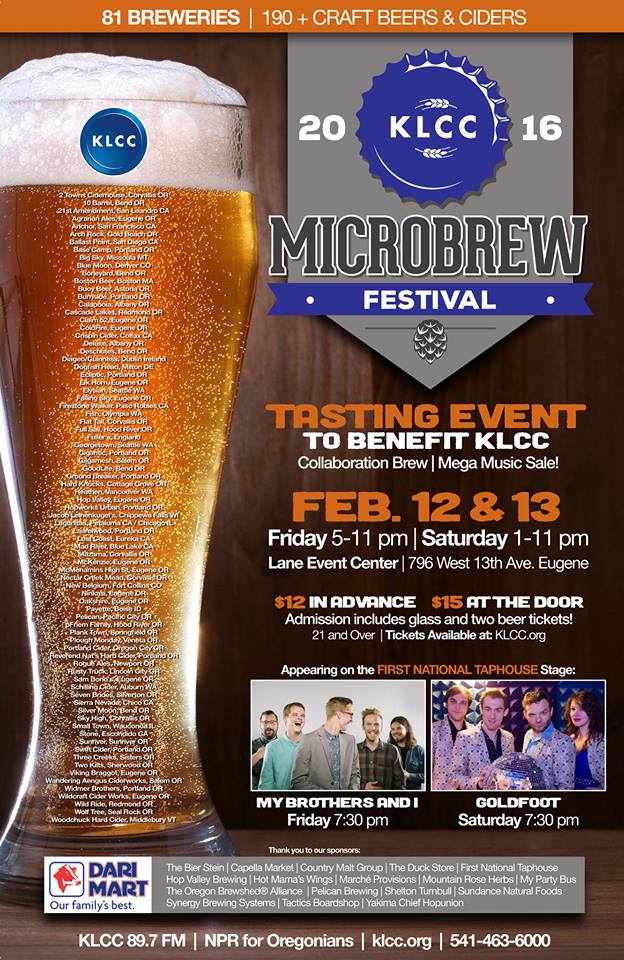 With Zwickelmania coming up this coming Saturday, a trip to Eugene, Oregon would make a nice weekend beercation since the annual KLCC Microbrew Festival takes place on Friday evening and all day Saturday. Yes, the annual fundraiser that allows craft beer drinkers to raise funds for Oregon Public Radio in Eugene.

The 2016 KLCC Microbrew Festival will take place on Friday, February 12 from 5:00 to 11:00pm and Saturday, February 13 from 1:00 to 11:00pm at Lane Events Center. This year’s festival will feature 80 Breweries serving 190 beers and ciders, the annual KLCC collaboration beers, live music, beer gear, and a large record and CD sale. For those wanting to donate their records or CDs, donations are accepted at KLCC, 136 W 8th Ave, Eugene, through Wednesday, February 10. All proceeds from the festival benefit KLCC 89.7 FM.

Advance tickets are now on sale at $12.00 each and include a festival glass and two beer tickets. At the door tickets will be $15.00 each. Additional beer tickets are $1.00 each for a 3 oz. taste. To enter the KLCC Microbrew Festival you must be 21 years of age or older.

A highlight of the KLCC Microbrew Festival is the collaboration beers that pour at the festival. For 2016, 20 local breweries and taphouses were randomly paired to brew 10 beers. The theme for the 2016 Collaboration Brew is using only five ingredients – 4 spices and a sap. These 20 entities were drawn from a hat and each pair took on the task of creating a tasty beer using the given ingredient.

Beyond the fabulous beers and ciders there will be live music at the KLCC Microbrew Festival at 7:30pm both nights. My Brothers & I will take the stage on Friday night and Goldfoot will bring its rock, funk and electronic music on Saturday night.