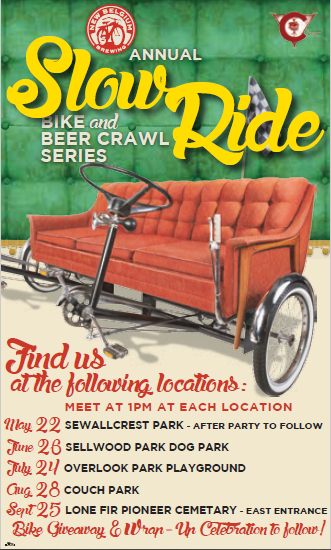 One of the more fun and casual beer events that take place here in Portland is the New Belgium Brewing Slow Ride. This bike ride series is one that brings a pub-crawl for those that like to bicycle from bar to bar. The 2016 New Belgium Portland Slow Ride Schedule has now been announced and will have all rides taking place on one Sunday per month beginning at 1:00pm. The first ride will take place on Sunday, May 22nd at Sewallcrest Park in Southeast Portland.

The concept for each New Belgium Portland Slow Ride is to meet at the designated location and then take off on a casual slow bike ride through that area of Portland. During the ride the crew from New Belgium will lead riders to some of their favorite Portland bars to drop in and carb up with a refreshing beer from New Belgium along with some light snacks and giveaways. Best of all during each monthly ride every rider will receive an entry to win the new 25th Anniversary New Belgium Brewing Cruiser during the final ride on September 25th.

This year’s New Belgium Cruiser is being made here in the good ole’ USA by Detroit Bikes in Detroit, Michigan. This year Detroit Bikes will produce about 2500 Cruisers for New Belgium. Below is a video about this new partnership.