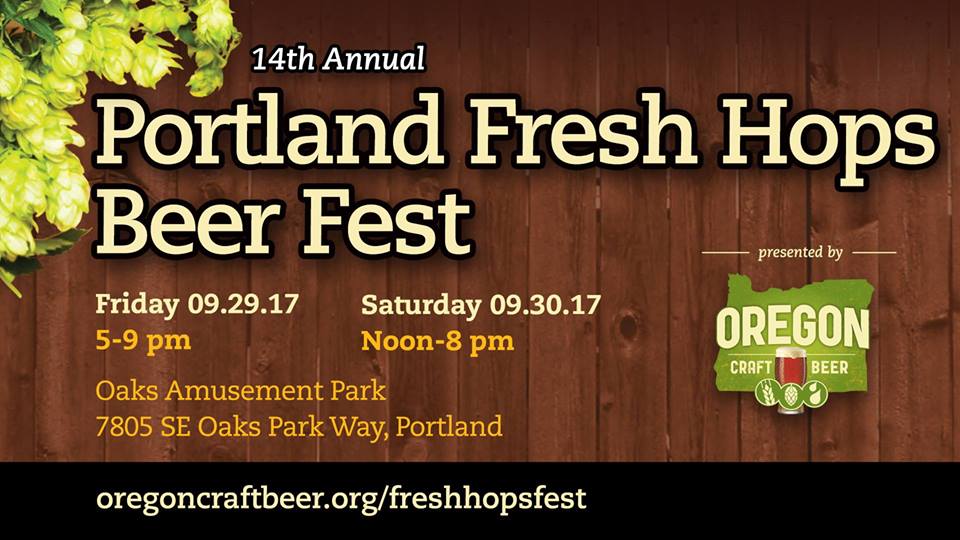 PORTLAND, Ore. – The Portland Fresh Hops Fest, a celebration of the Oregon hop harvest that annually takes place between mid-August and mid-September, features more than 60 Oregon craft beers made with hops freshly picked off the vine and used within hours of harvesting. The 14th annual event will take place Sept. 29 through 30 at Oaks Amusement Park, 7805 SE Oaks Park Way. Hours are 5pm to 9pm on Friday and 12pm to 8pm on Saturday.

Admission to the Portland Fresh Hops Fest is free. Drinking packages cost $20 for a souvenir tasting glass and eight drink tickets. Advance discount tickets are on sale now at MercPerks (www.portland.altperks.com), offering two tasting glasses and 16 drink tickets for $28 ($40 value). General admission tickets will go on sale in September at www.oregoncraftbeer.org/freshhopsfest. Additional tasting tickets are sold on-site for $2 each or four for $5. Event parking is free.

The festival annually features around five-dozen Oregon brewed fresh hop beers; the beer list will be announced in mid-September. As only one beer from each brewery is available, attendees are encouraged to arrive on Friday or early on Saturday for the greatest selection. The festival will also feature homebrew demonstrations of beer, kombucha and root beer from Portland U-Brew; a number of commercial vendors; and on-site food from Urban German Grill.

Minors are not allowed on Friday, but are permitted on Saturday until 5pm (Oaks Amusement Park is closed that day, but the train will be running from 12pm to 5pm for kids accompanied by adults). Well-behaved dogs on leashes are welcome.