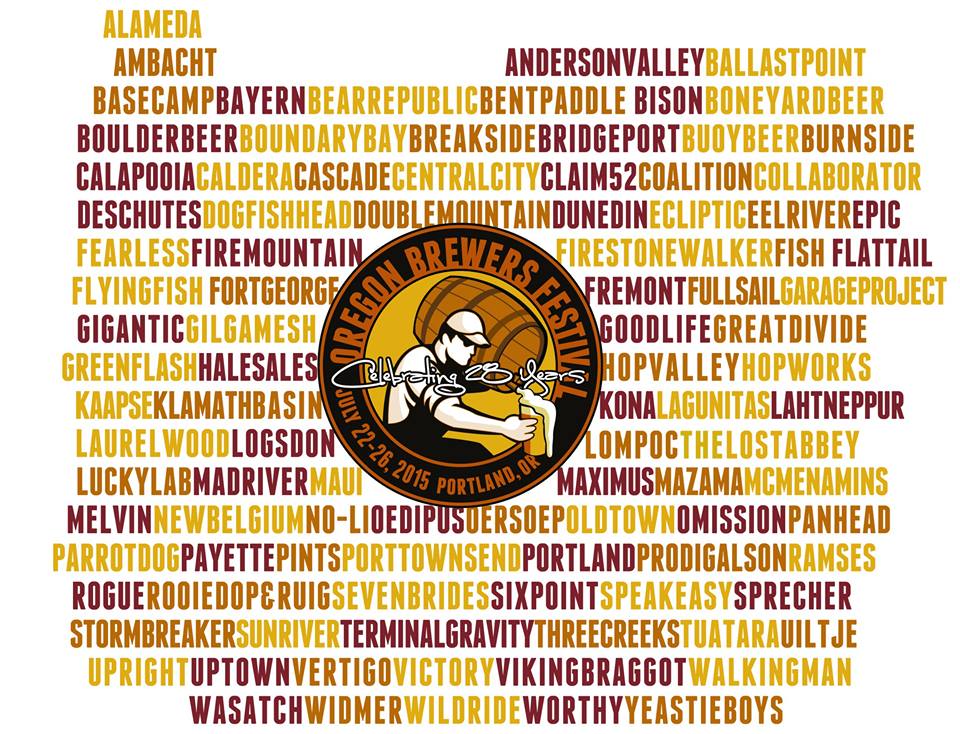 We are just a little over a week away from the kickoff of the 28th Annual Oregon Brewers Festival (OBF) taking place at Tom McCall Waterfront Park in downtown Portland, Oregon. Always held the last full weekend of July, the 2015 edition will take place from July 22 through 26 beginning each day at Noon.

Now in its 28th year, the OBF has grown from its humble beginnings back in 1988 when there were only seven craft brewers in all of Oregon that were BridgePort, Widmer, McMenamins, Portland Brewing, Full Sail, Deschutes and Rogue. This year organizers expect to see 85,000 attendees from all over the world being assisted by the generous 2,000 festival volunteers.

Though the first beer will not be poured until Noon on Wednesday, July 22, OBF will officially kickoff with its annual parade leaving from Metalcraft Fabrication at 723 N Tillamook Street at 11:30am. People who want to take part can gather in the fenced in area on the corner and get their ID checked by the security guard on-site starting at 11:00am. Everyone with a wristband will walk straight into the festival and not be carded at the festival entrance. More than 500 craft beer lovers and a small brass band will cross the Steel Bridge over the Willamette River, joining up with another group from Rogue Ales at NW 3rd and Davis. Both groups will then end up on the grounds of the festival for the opening ceremonies, which will begin around Noon. This year’s Grand Marshals are Kurt and Rob Widmer, founders of Widmer Brothers Brewing Co., who were also part of the original Oregon Brewers Festival committee.

Since OBF is a non-ticketed event admission is free into the festival venue. However to take in the abundance of craft beer options the purchase of a 2015 souvenir tasting cup is required at a cost of $7.00. As in years past beer is purchased by using purchased wooden tokens that cost $1.00 each. A taster that is a small 3oz pour will be one token, a full 14oz cup pour will be four tokens. From doing the math a full 14oz pour is the best option, especially on the days when the never-ending beer lines are present.

Tasting cups and tokens are sold on-site only by cash, as OBF is a cash only event. There will be eight ATMs on-site. Advance purchase of the OBF Tasting Cup can currently be made at Raccoon Lodge & Brew Pub, Cascade Brewing Barrel House, Belmont Station, Deschutes in the Pearl, Rogue Ales Public House and the Green Dragon.

Beer will pour each day from July 22 through 26 at Noon until 9:00pm except for Sunday when the festival closes at 7:00pm. Token and glass sales close one-half hour prior to the taps shutting off (8:30pm daily, except 6:30pm Sunday).

Pouring at the 2015 OBF will be 89 breweries from 15 states presenting a number of diverse styles. There will also be five breweries from New Zealand and seven from The Netherlands making 105 beers in all pouring at this year’s OBF. In the two main tents, OBF will serve the 90 craft beers from the 89 U.S. and Canada breweries. Another 13 brewers from New Zealand and The Netherlands will serve 15 more beers in the International Beer Garden as part of a cultural exchange of ideas, knowledge and great craft beer.

Adding to last year’s international brewers from The Netherlands sees a return of Kaapse, Maximus, Oedipus, Oerseop, Ramses, Rooie Doop, RUIG and Uiltje. Joining the Dutch brewers this year are first time festival breweries Garage Project, Panhead Custom Ales, ParrotDog, Tuatara Brewing, and Yeastie Boys from New Zealand. This year, in partnership with the Beervana Beer Festival in Wellington, New Zealand, OBF has flown over five brewers and their beer from the land down under. Both the Dutch and New Zealand brewers will be on hand daily in The International Beer Garden to chat about brewing in their part of the world, so stop by, taste their beer and say hello.

The International Beer Garden is the brainchild of OBF festival director Art Larrance, who is keen to develop long-term cultural exchanges with brewers around the world. Through the festival, our local beer community can share its passion, knowledge and friendship with other burgeoning craft beer movements in a collective celebration.

The following brewers will be holding court in the International Beer Garden all weekend long, along with Beervana Beer Festival director David Cryer.

Then returning from The Netherlands are the following Dutch brewers.

Last year, one of the Dutch brewers – Rick Nelson with Oedipus Brewing – teamed up with film director Boris Booij to film the journey. They will be debuting the documentary It All Starts With Beer at this year’s festival; the film will loop on a screen in the International Beer Garden. The movie shows how and why Portland catapulted ahead in the microbrew revolution, comparing it with The Netherlands and its uprising of craft beer making. For those who want to see the film on the big screen, it will be shown with a panel discussion at the Mission Theater, 1624 NW Glisan, on July 27 at 7:00pm.

All of the Kiwi and Dutch brewers will be collaborating on beers with Portland brewers while they are in town; thank you to host brewers Base Camp, Cascade, Deschutes, Ecliptic, Gigantic, Lompoc, The Commons, Upright and Widmer for extending a warm welcome to the festivals guests.

In case you’re wondering who’s who in the Beer Garden, the New Zealand brewers will be in black shirts with OBF logos, and the Dutch will be in orange. Please use hashtags #KIWI2OBF and #NLtoPDX when mentioning these beers in social media.

A breakdown of the beer styles that will be pouring this year is quite diverse. The beer style with the largest amount of beers will be American-Style Pale Ale with eight total beers. This is followed by currently the industry’s most trendiest beer style, Session India Pale Ale along with American-Style India Pale Ale at six each. There will be five different French & Belgian-Style Saisons pouring which is quite nice. For those that are concerned about their gluten intake there will a total of two Gluten-Free Beers pouring from Deschutes and Omission. 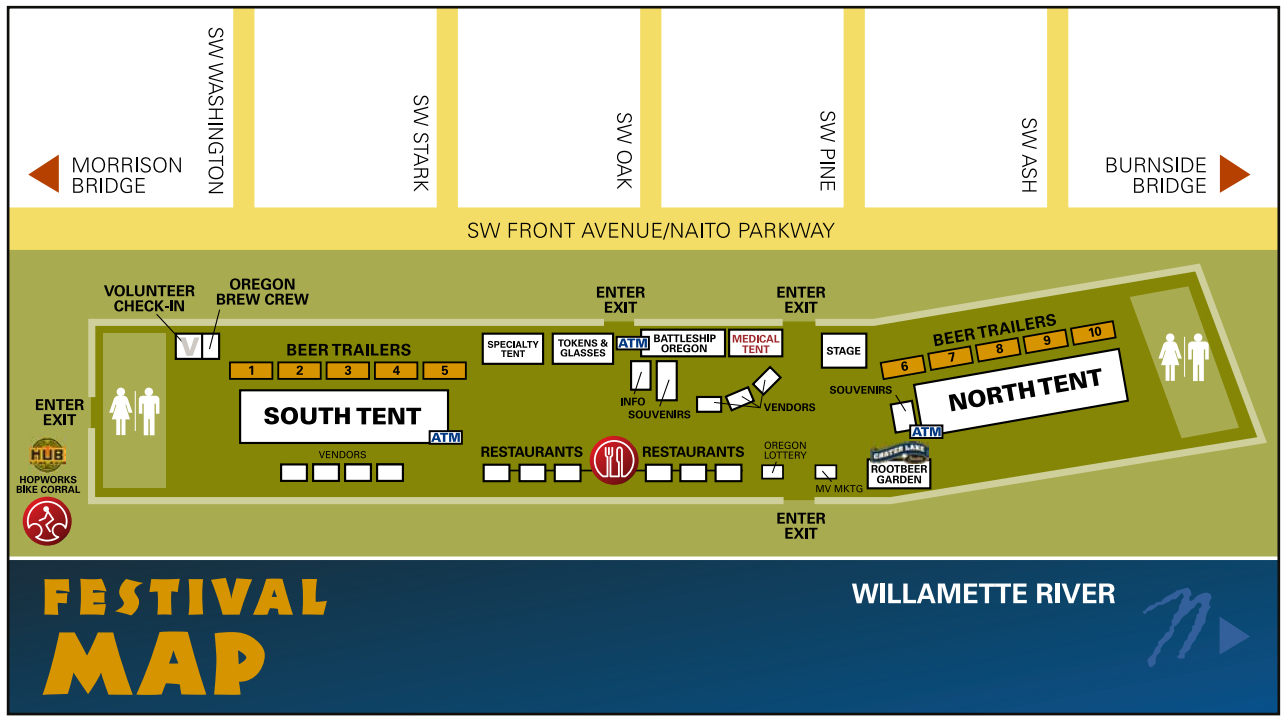 Here’s the final beer list for the 28th Annual OBF along with its corresponding trailer number:

Beers designated with an * are unique and only available at OBF.

Over the years there have been at least 388 breweries that have poured its beers during OBF. Its amazing that Bayern, BridgePort, Deschutes, Full Sail, and Widmer have never missed sending beer to all 28 editions of OBF.

OBF main focus is on craft beer but there are additional attractions at the festival including beer related vendors, live music, homebrewing demonstrations, and food vendors. The festival is an all ages event and minors are welcome at the festival when accompanied by a parent. The Crater Lake Root Beer Garden offers complimentary handcrafted root beer for minors and designated drivers.

The 28th Annual OBF Music Lineup is as follows for each of the five days. 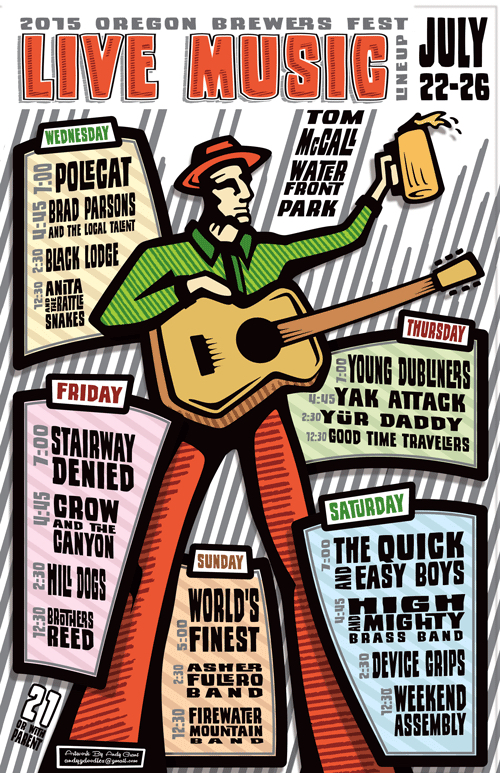 For those that are visiting Portland from out of town an excellent resource for all thing travel related is Travel Portland. From there you can learn about restaurants, attractions and more. You can download a concise visitor guide by clicking here. 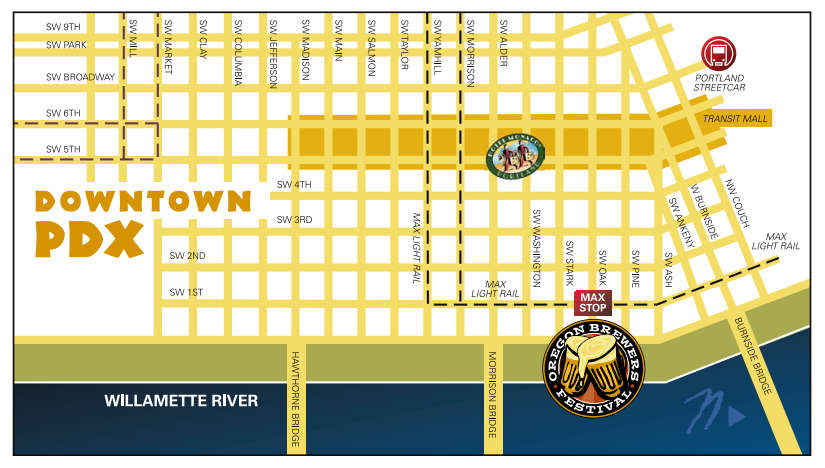 Arriving to OBF will be made easier this year in part to the Naito Pilot Project from the Portland Bureau of Transportation. Commissioner Steve Novick and community partners announced the Naito Pilot Project, a temporary safety solution that will create a pleasant route for people to get to and enjoy the Oregon Brewers Festival at Governor Tom McCall Waterfront Park.

Starting Tuesday, July 21 at 6:00pm and lasting through Monday, July 27 at 6:00pm, the four-lane SW Naito Parkway will have three travel lanes, plus a lane of open space for the public to walk and bike safely to the festival. The pilot project will open nearly a mile of street, 15 feet wide, to public use, from SW Salmon Street to NW Pine Street. 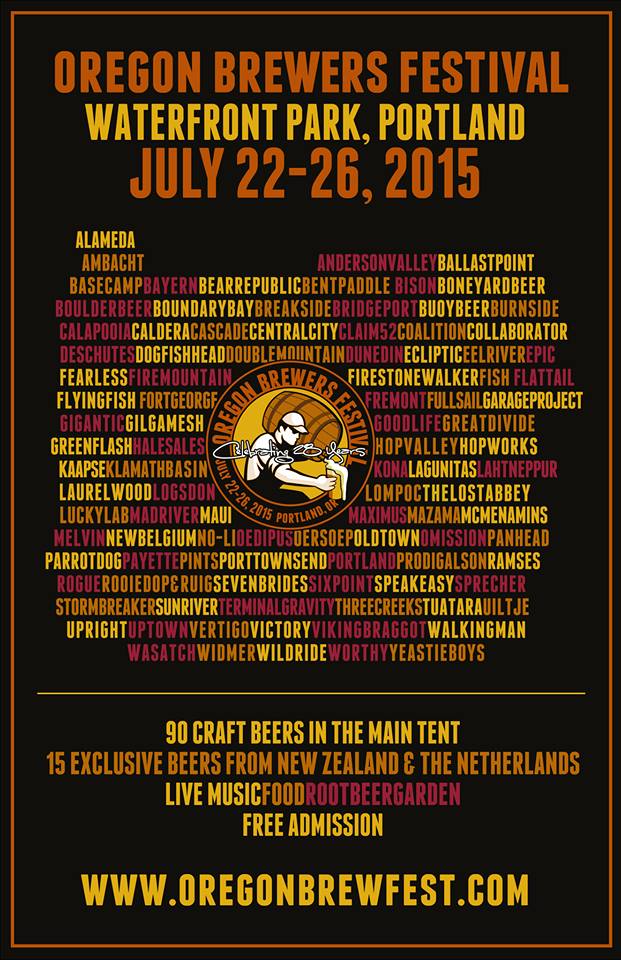