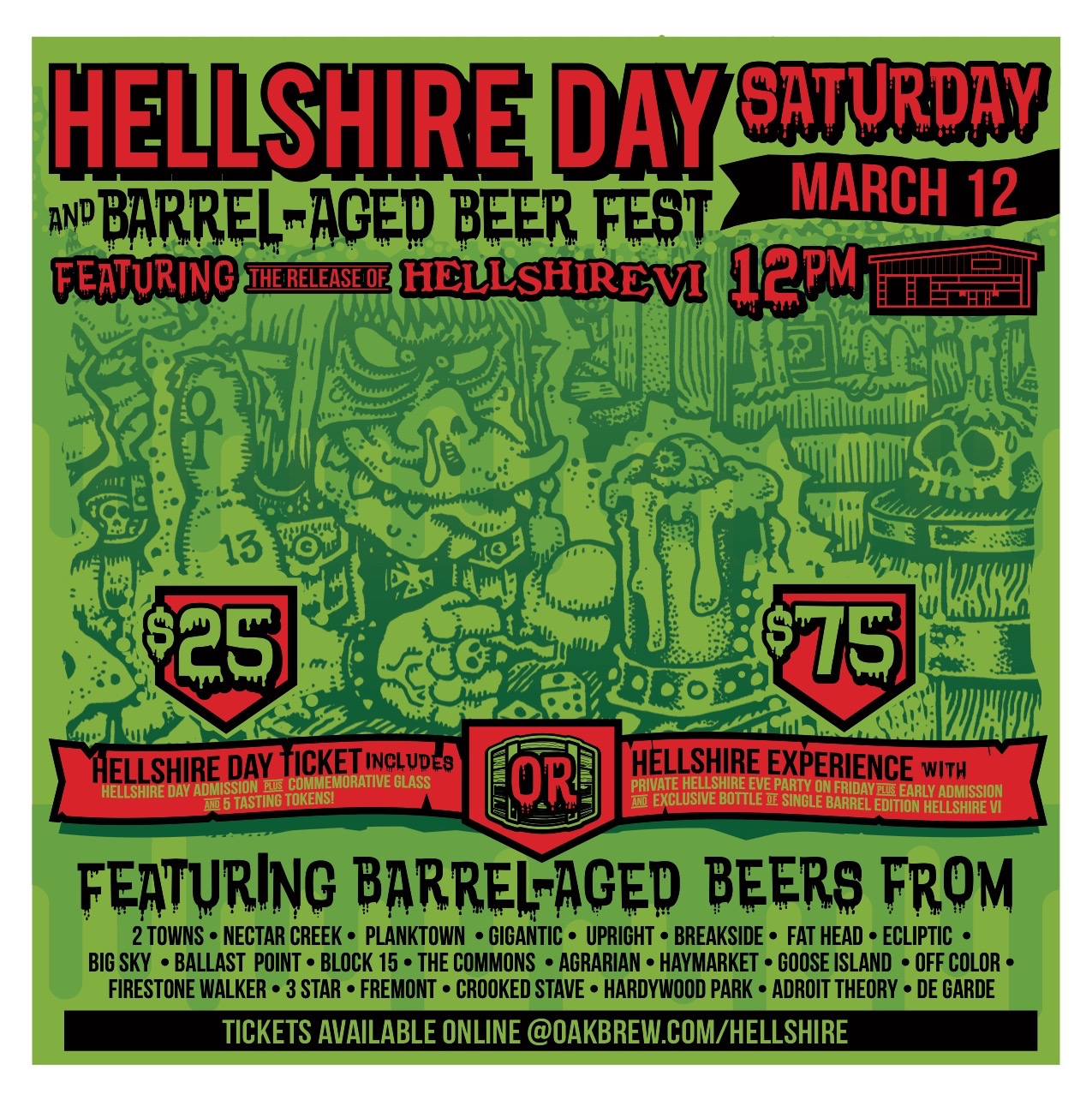 Now in its third year and its second year being held a month after Zwickelmania, Hellshire Day & Barrel-Aged Beer Fest returns to Eugene, Oregon on Saturday, March 12. This day also coincides with Oakshire Brewing Hellshire VI bottle release that begins at Noon when the gates open for the fest. Hellshire Day & Barrel-Aged Beer Fest will include offerings from Oakshire’s barrel-aging cellar, as well as 50+ barrel-aged beers from breweries around the country. The first sales of 22 oz. wax-dipped Hellshire VI bottles start at the festival.

This will be the first Hellshire release since the departure of Oakshire’s former brewmaster Matt Van Wyk, who has moved on the start his own projects Alesong Brewing and Blending. Since Van Wyk’s exit, Head Brewer Tyler West has stepped into lead Oakshire’s barrel aging program. “We’re very excited and proud of this year’s Hellshire VI release! We’ve spent the last year brewing, cellaring, and tending to a number of barrels of this beer to ensure this year’s Hellshire is more than exceptional. On top of that, we reviewed our absolute top barrels and selected one that stood out for our first-ever Single Barrel Reserve Hellshire. I’m also personally excited to try some of the most respected, rare beers from around the country on Hellshire Day,” stated West in a news release.

Once again Hellshire Day & Barrel-Aged Beer Fest will include live music by local bands and food served up by local food carts. Entry fee to the festival will be $25 that includes a commemorative Hellshire VI tasting glass and five sampling tokens, with more available for purchase.

Breweries and cideries featured for this year’s Hellshire Day & Barrel-Aged Beer Fest include:

To make Hellshire Day & Barrel-Aged Beer Fest event more memorable Oakshire will also offer a unique Hellshire Experience to a limited number of early registrants, which will include: Friday night, March 11th, behind-the-scenes barrel-program tour and tastings with charcuterie; a bottle of Oakshire’s first-ever and extremely rare Single Barrel Reserve Hellshire; and, early entry to the Hellshire Day festival to be first in line for the most sought after offerings. This Hellshire Experience costs $75.