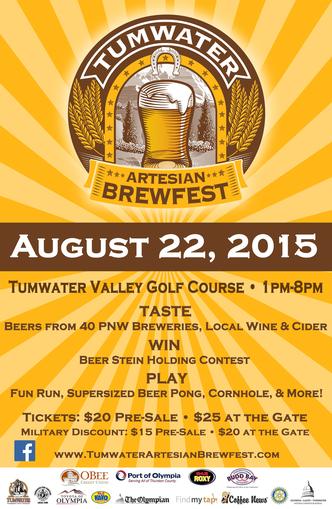 The modern day craft beer movement does not seem to be letting up any steam. However it can be beneficial to reminisce on what we once had in beer not all that long ago. One of the Pacific Northwest’s legendary breweries was situated on the outskirts of Olympia, Washington along the Tumwater Falls.

Some of this beer history can be relived when the Tumwater Artesian Brewfest returns for its third year on Saturday, August 22 from 1:00 to 8:00pm. Celebrate the roots of Washington State’s brewing industry and sample selections from about three dozen craft breweries. Sip suds from around the state along with the original Olympia beer on tap while enjoying lawn games, music and food vendors in the shadow of the former Olympia Brewery at the Tumwater Valley Golf Course Driving Range.

Back in 1896 for Olympia Brewery, the secret to success was simply “It’s The Water”. Situated above Tumwater Falls, the artesian spring water is said to have been a key component in what became one of the Northwest’s most iconic brands.

“This third annual event has quickly become a local favorite and we’re thrilled to see the groundswell of support and excitement around the state,” said Becci Welsh, partnership development director of Visit Olympia. “We’re fortunate to have such a dynamic craft brewing industry in Washington, and what better place to celebrate it than the birthplace of the state’s most iconic beer brand.”

Make a craft beer weekend out of it with the Tumwater Artesian Brewfest package, which includes a one-night stay at a variety of participating hotels along with two event tickets, two tasting mugs and a Brewfest Fedora to stay “cool” at the event. Click here to find out more overnight information or to book travel.

Pre-sale tickets are $20 ($25 at the gate) and include five tastings and a mug. Military and designated driver discounts are available. To purchase pre-sale ticket click here. 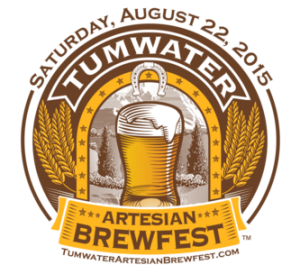 The list of participating breweries continues to grow. Listed below are a sample of what to expect in beer, cider, wine, and spirits.

Besides the wonderful craft beer there will be some fun backyard games to play including Super Sized Beer Pong, Cornhole, Volleyball, Frisbee, Hula Hoops and a Mechanical Shark. There are also a couple contests including the festivals Hole in One Contest and Beer Stein Holding Contest.

For more information on the Tumwater Artesian Brewfest visit www.tumwaterartesianbrewfest.com or stay up to date on Facebook, Twitter, Instagram and hashtag #tabrewfest15. Tumwater Artesian Brewfest is hosted by The Olympia, Lacey, Tumwater Visitor & Convention Bureau (Visit Olympia) and sponsored by a variety of local businesses that can be found at http://www.tumwaterartesianbrewfest.com/sponsors.