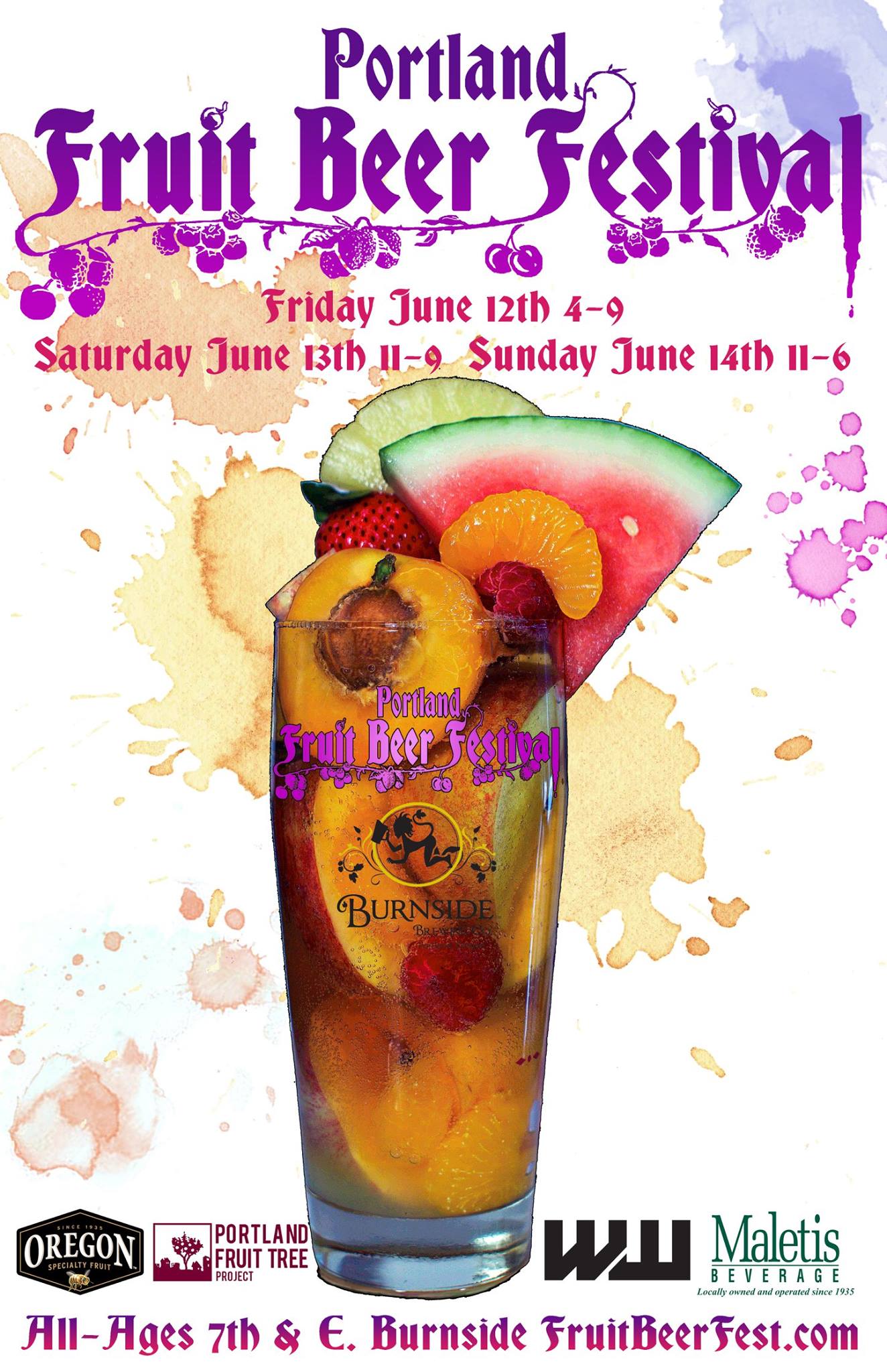 The 5th Annual Portland Fruit Beer Festival (PFBF) returns to Burnside Brewing from June 12th through 14th. This year’s festival brings with it a few changes such as increased space, a new collaborative PFBF Bottle release from Burnside Brewing and Reverend Nat’s Hard Cider and disappointingly less beer being offered.

From acquiring some neighboring car lot space just west of Burnside Brewing, this year’s festival is said to have a 40% larger footprint. However, with this increased footprint the amount of beers being offered in the festival’s standard lineup has decreased from last year’s offering of 23 beers to this year’s 22 beer choices. Last year the PFBF offered 23 beers alongside 2 ciders. This year’s choices will include 22 beers, 3 ciders, 1 hybrid beer/cider, and 1 fizzy wine so the overall total amount of alcoholic beverages has increased. We received word from a festival organizer that the “Rare/Rotating beer list coming very very soon.”

The most notable new attraction to this year’s PFBF will be the first ever Fruit Beer Festival bottle release. Fruit of the Garden of Good and Evil is a collaboration between Burnside Brewing Co. and Reverend Nat’s Hard Cider. This unholy marriage of beer and cider is the ultimate temptation of luscious, juicy and tropical fruit character with notes of Pineapple and Apricot that pulls you in before ending in a fiery tropical heat of Ghost Peppers, Scotch Bonnets and Aji peppers and a thirst quenching 4.5% (estimated) ABV. Available in 22oz bottles only at Burnside Brewing during the Fruit Beer Fest for $7 with limited draft poured at the festival, Reverend Nat’s and special events. 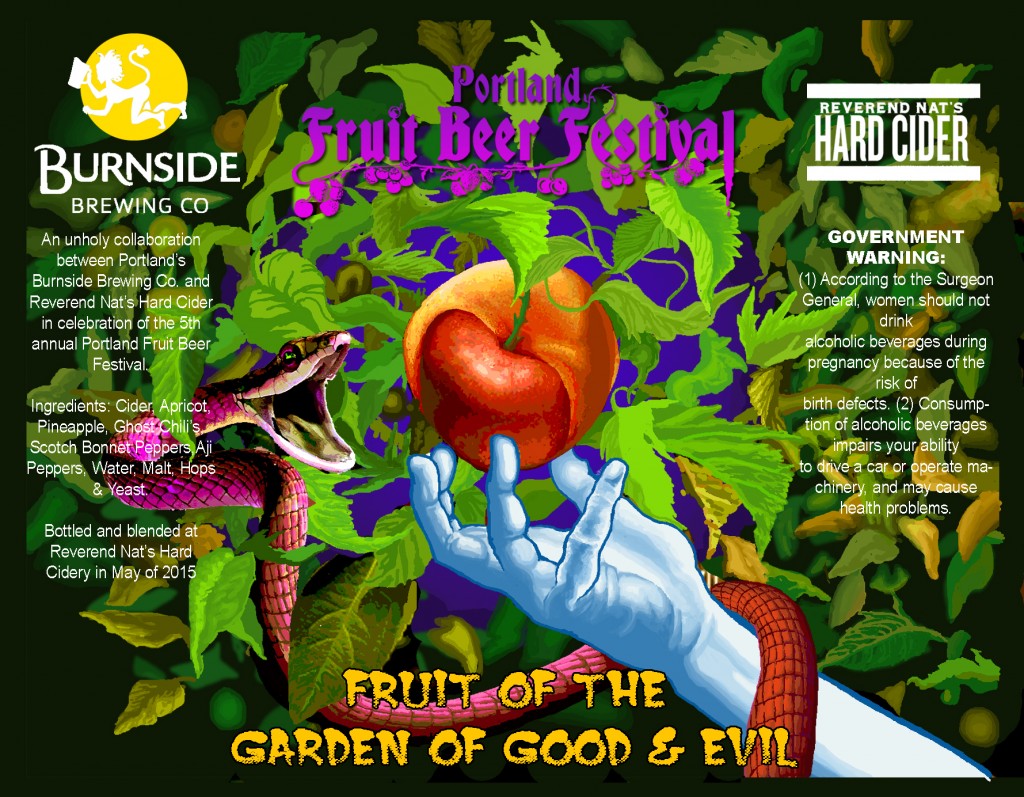 Hours for the 2015 Portland Fruit Beer Festival will be the following for its 3-day run.

The addition of hours on Friday should alleviate some of the crowds on Saturday. From our experience of attending the last couple of years is that its best to attend on Sunday when the crowds are pretty much non-existent. We really appreciated the short beer lines and not getting bumped into constantly as it seems to be on the Saturday of the event.

Hopefully with the additional space the organizers will also spread out the beer taps from all being under one tent to multiple locations with more space between each pouring station. In the previous years its been a challenge when the festival is busy to distinguish which line one is in. This will go a long way into alleviating the confusion and frustration that comes with larger crowds on the hot asphalt.

Advanced General Admission Tickets are currently on sale for $22.09 after fees for 12 drink tickets and a 16oz Glass. Tickets will be $20 at the door for the same 16oz glass and 12 beer tickets. Re-entry on multiple days is allowed as long as you get your wristband and have the official PFBF glass. PFBF is an all ages event, but be cognizant of the crowds that are sure to be there on the Saturday of the three day event. There will also be local food carts and the excellent pub menu inside Burnside Brewing Co.

Below is the Main Festival Draft Beer List that’s listed in alphabetical order by brewery along with the beer’s description.

Alameda Brewing: Berried By Night Marionberry CDA
Guided only by the light of the moon, we poured over 130 pounds of Marion blackberries, copious amounts of 7 varieties of hops, and just a bit of roasted malt into this very Cascadian beer. Enjoy the night, any time of day. 7.4% ABV 75 IBU

Baerlic Brewing: Apolis Cider Weiss
What do you get when you use wild lactobacillus from the skin of English apples to kettle sour a Gose only to blend that with Reverend Nat’s Ciderkin Cider? A ridonkulously refreshing beer that hails from no place but the epic depths of our whacked out minds. 4.23% ABV enough IBU.

Breakside Brewery: Tropical Fruit Salad
Quasi IPA Six fruit blend
Hops like Mosaic, Citra, and Eldorado are often described as having the flavor and aroma of tropical fruit. So, we’ve reverse engineered the flavors of American IPA using real tropical fruit. A blend of six carefully selected fruits go into this beer, as well as a healthy dose of similar tasting hops. Try it for yourself and see how hop and fruit flavor meld together! 6.2% ABV Unknown IBU

Burnside Brewing: Peaches of Immortality
The Legend of Peaches of Immortality: Peaches symbolizing immortality (or the wish for a long and healthy life) are a common symbol in Chinese art, appearing in depictions or descriptions in a number of fables, paintings, and other forms of art, often in association with thematically similar iconography, such as certain deities or immortals

The immortals waited six thousand years before gathering for this magnificent feast; the peach tree put forth leaves once every thousand years and it required another three thousand years for the fruit to ripen. Statues depicting Xi Wangmu’s attendants often held three peaches. 3,000 years of life after the consumption of a single peach. 6.2% ABV 3 IBU

Deschutes Brewery: Dr. Plum
For sour beer enjoyment we prescribe Dr. Plum! A base of Deschutes River Ale that we aged in oak for over 12 months with B. Lambicus, B. Bruxellensis, Lactobacillus and tart Italian Plum. Light and refreshing with a hint of fruit and a sour kick. It cures what ales ya! 5.6% ABV 24 IBU

Ecliptic Brewing: Ultra Violet Blackberry Sour Ale
Ultraviolet is brewed with Oregon blackberries, soured in the brewhouse and fermented with Belgian yeast. The result is a tart and crisp sour ale, with ripe blackberry flavors radiating through it like cosmic rays traveling the universe. 7.5% ABV

Elysian Brewing/Payette Brewing: Huckleberry Sour
Elysian Brewing of Seattle, Washington and Payette Brewing of Boise, Idaho teamed up for the first time to brew this Northwest huckleberry sour. The beer is light, tart and bright freakin’ PINK! It’s brewed in the (mostly) traditional Berliner Weisse style, employs a grain bill of half wheat and half barley, is soured with Lactobacillus, and weighs in at a thirst quenching 2.8% ABV. Add to this a whopping two-and-a-half pounds per barrel of delicious Idaho-grown huckleberries and you have the perfect antidote for these hot summer days.

Kells Brew Pub: Raspberry Creamcicle
Poured on Nitro. This beer has a nose of raspberries with a smooth and full but light body. The nitro makes it creamy and mellow and the finish is tart from the fruit. It is so easy to drink. Brewed with 6-row, wheat, corn, rice, flaked barley, and a healthy dose of biscuit malt. All tettnanger hops and fermented with 1056 ale yeast before being lagered an additional 6 weeks with Raspberries added in the brite tank. 4.86% ABV 18 IBU

Laurelwood Brewing: There Gose the Neighborhood
Gose is an old wheat beer style originated in Leipzig, Germany. It is a beer that uses Lactobacillus bacteria to acidify the beer giving it a tart, lemony flavor. Gose’s are spiced with coriander and salt to give them a deep and savory character, which balances nicely with the tart finish.  We used Jacobsen Sea salt from the Oregon coast to give it a rich sea salt flavor. The beer itself is hazy and light, like many wheat beers, and is very refreshing. We added Oregon Fruit Boysenberry puree to our Gose for the Fruit Beer Fest, which added a pink/ purple color and mild berry flavor.  We hope you enjoy this delicious beer, Prost! 5.1% ABV 8 IBU

Lompoc Brewing: Golden Pear
Golden ale fermented in stainless steel with pears and aged on the pears for a year. Subtle notes of pear with a slight tartness. 5.0% ABV

Lucky Labrador Brew Pub: Banana Bread
Wheat, chocolate, and aromatic malts give this barely hopped brown ale a malty aroma and smooth mouth feel. Banana, clove, vanilla, and ginger was added to the beer during boiling, fermentation, and conditioning to bring all the flavors of a banana bread Grandma would be proud of. We hope you enjoy this unique ale. 4.76% ABV 3 IBU

Oakshire Brewing: Stone Free Cranberry Ginger Wild Ale
Stone Free is a blend of a Brett fermented Berliner Weisse and a wine barrel aged sour golden ale aged on Cranberries and Ginger. It is deep pink in color with tart fruit, funky and bready aromas and a background waft of ginger. Stone Free has both sweet and tart flavors intertwined with mild spicy ginger and a crisp and dry tangy finish. 5.1% ABV.

Upright Brewing: B.B. Stout
Named in honor of the late B.B. King, is a straightforward beer with big flavors. Fermented in our open top tanks, the beer maintains a robust profile typical of the stout style with the addition of over 200 pounds of blueberry, adding one extra flavorful layer to the beer.

Widmer Brothers Brewing: Fresh Strawberries
Tart Farmhouse Saison with Strawberries
Fresh Strawberries is a collaboration brew with Coda Brewing from Aurora, Colorado.  Using Saison as a base, we added fresh strawberries and then kettle soured the beer with Lactobacillus to increase the tartness and balance out the sweetness from the fruit. French Saison yeast allowed us to pull some subtle spicy notes in the aroma and flavor. 5.4 % ABV.

Cider Riot: Hedgerow Fruits
Plum and Blackcurrant Cider
Yamhill County was once the prune capital of the world, for Hedgerow Fruits we combine Italian prune plums with blackcurrants for a dry tart cider. Hedgerow Fruits is our tribute to the late English beer writer Michael Jackson, who was fond of referring to “notes of hedgerow fruits” as a beer descriptor. Made for the Portland Fruit Beer Fest, Hedgerow Fruits is a limited release from Cider Riot! 6.9% ABV