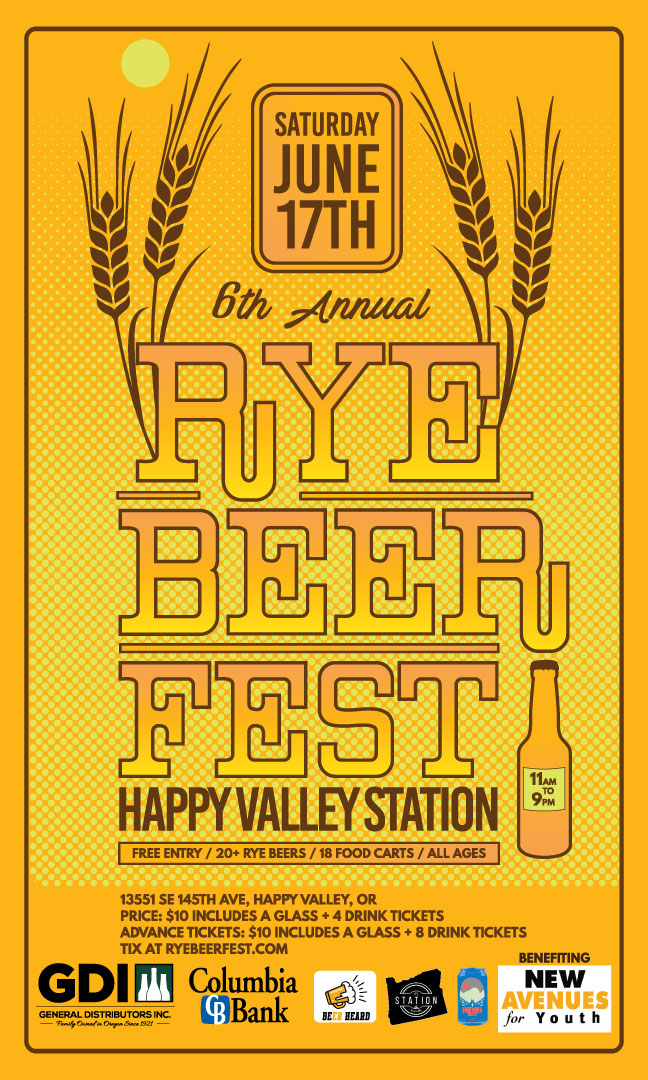 According to festival organizer, Kerry Finsand, “The goal of the Rye Beer Fest is to bring attention to the use of rye in beers while creating awareness for a good cause. Rye beers can be earthy, tart, or spicy. This fest will feature a curated tap list consisting of a variety of beers styles utilizing this impactful grain. Expect rye beers ranging from Saisons, IPAs to the traditional German style of Roggenbier.”

In years past the Rye Beer Fest has been held at Spirit of 77 and for the past few years at EastBurn. This year Finsand decided to move the fest out to the Happy Valley Station Food Cart Pod that offers 3,800 square feet of indoor temperature controlled seating. This suburban food cart pod currently features 13 food carts along with 30 Taps, a beer cart that serves 30 offerings of beer and cider.

Entry to the Rye Beer Fest is an affordable $10.00 in advance that includes a tasting glass and 8 drink tickets ($11.47 after fees). At the door it’s the same price but attendees will only receive 4 drink tickets. Additional tickets can be purchased for $1.00 each. A majority of the beers will cost one ticket for a four-ounce pour or four tickets for a full glass. A few of the beers may require multiple tickets. Purchase your tickets in advance here for the best value.

A portion of the proceeds from Rye Beer Fest will go towards New Avenues For Youth, a local non-profit that supports homeless and at youth-risk in Portland. Representatives from the New Avenues will be on site to answer questions and run a raffle with prizes ranging from event tickets to brewery apparel.

For the kids, there will be some activities in the designated Crater Lake Root Beer Kids Zone including; toys, art, games and free Crater Lake Root beer with parent’s showing proof of buying admission into the event.

Getting to the rye beer fest is easy with Brewvana as the bus touring company is offering a VIP Rye Beer Fest experience for $30, which includes round trip transportation from the Lloyd Double Tree departing at 10:00am, VIP entry, 4 hours at the fest from (11 am – 3 pm), official rye beer fest tasting glass and 12 drink tickets. If you prefer public transportation choose the SE Sunnyside & 147th bus stop close by (ID #12924).

Starting at 6 pm all of the remaining rye beer will be available for $6.00 a growler fill (up to 64 oz) that you provide. If you don’t have a growler of forgot to bring one, a glass growler (up to 64 oz) filled with the rye beer of your choice for only $8.00. Growler fills special pricing is available to festival attendees with wristbands the day of and is open to the general public on Sunday.

Stay up to date on the Rye Beer Fest by following its Facebook Page and make sure to use hash tag #ryebf17 on all of your social media.