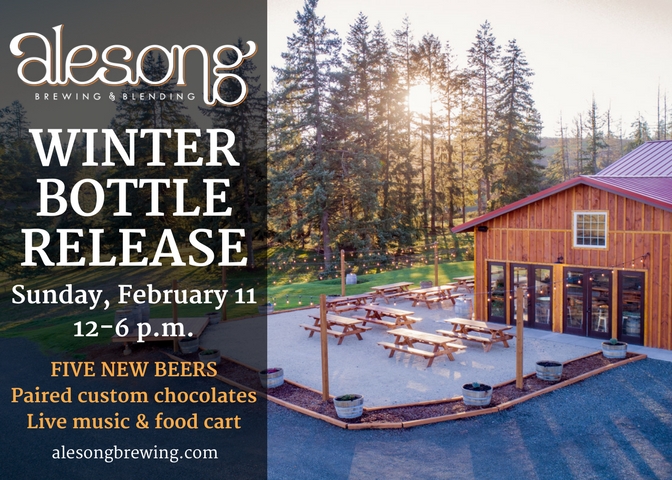 Taking place from Noon-6:00pm, Alesong’s February beer release will be hosted in its Barrel Cellar. The new beers will be available for tasting for the very first time in Oregon and will be paired with custom chocolate confections alongside live music and a food cart. The tasting room will be open to the public as normal, but the release celebration in the cellar and access to the new beers will only be for those who pre-order, with a 6 bottle purchase waiving the $20 entry fee.

The new release will be available for all in the tasting room and select restaurants and bottle shops the following week. We will feature Rackhouse Reserve as one of the beers at BREWPUBLIC’s 9th Annual My Beery Valentine on February 14th at Bazi Bierbrasserie.

“We are more than happy to help anyone out who is looking for an excuse to ditch their New Years’ resolutions,” says cofounder, Doug Coombs in a prepared statement. “And what better way to get through the rest of these cold winter days than with a few big, spirits-barrel-aged creations or a juicy peach ale to conjure memories of the sunshine?”

For those looking at spending a fun filled weekend in Eugene, this also happens to be the same weekend as the long running KLCC Brewfest that takes place from February 9-10 at the Lane Events Center.

People interested in signing up on Alesong’s mailing list to pre-order beers for pick up at the release party or direct shipping (AZ, CA, CO, CT, DC, FL, MA, NE, NH, NY, OH, OR, PA, WA, WI) can sign up and find out more info at alesongbrewing.com/join.