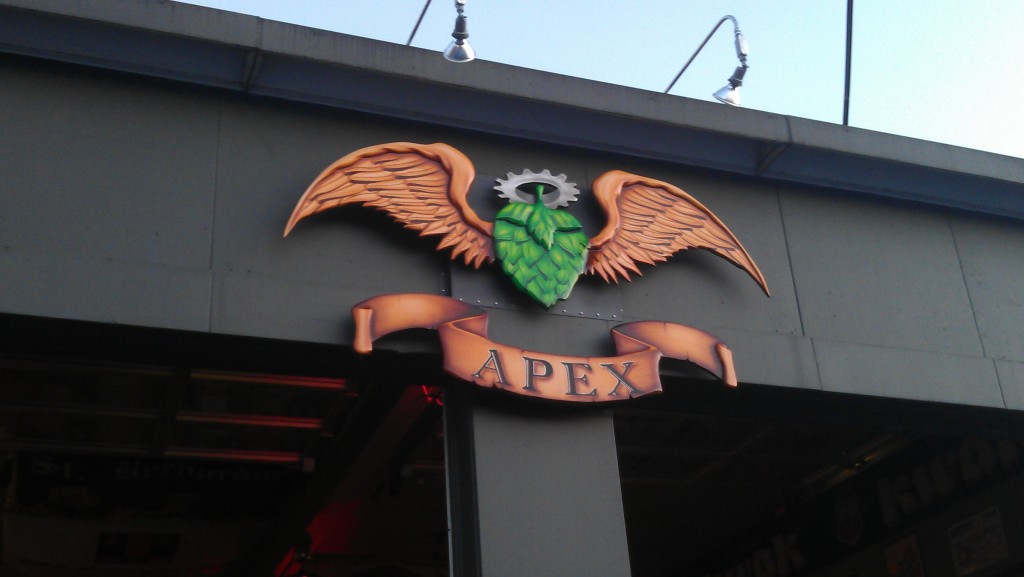 It’s too bad that the Craft Brewers Conference here in Portland only takes place over four days. Breweries, distributors and bar owners are cramming about a months worth of events into this very short timeframe so planning is of an essence for all craft beer lovers.

The latest bar to announce its CBC schedule is APEX Bar and its one that will surely delight the masses. APEX will be hosting 4 consecutive days and nights of craft beer bliss.

Day 1 – Tuesday, April 14
On the opening night of CBC, APEX will be hosting two different tappings. The first will begin at 2:00pm when 11 of the taps will be home to import legends, Shelton Brothers.

Then at 7:00pm will feature an evening with Firestone Walker and Boneyard Beer. These two breweries have a close friendship that began when Boneyard’s Tony Lawrence spent some time working at Firestone prior to launching Boneyard. 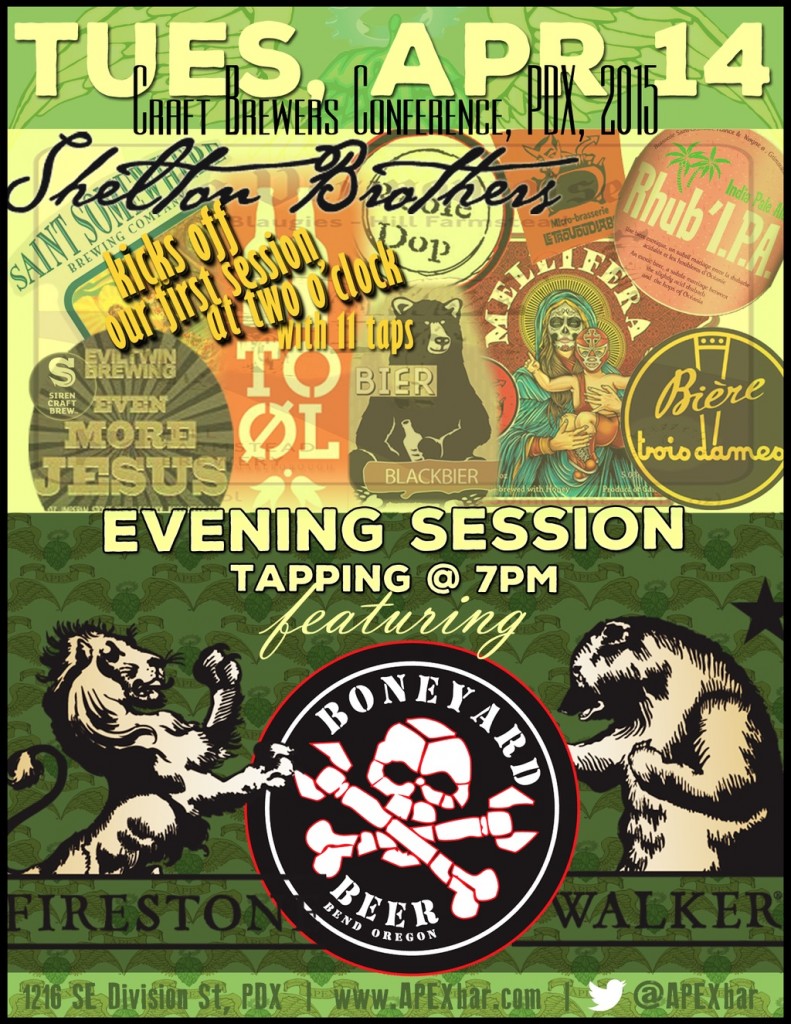 Day 2 – Wednesday, April 15
If Tuesday was not enough, Wednesday afternoon will bring a sequel to the original Gigantic & Friends that took place in 2013 as part of Gigantic Beer Week. For this go-round, Gigantic Brewing has returned the invite to Three Floyds and Solemn Oath while inviting Lost Abbey, Beau’s All Natural, Sun King and Surly to the tapping that launches at 2:00pm. Look for the new collaboration, Crescendo of Doom, that Gigantic brewed with Three Floyds on their recent visit to Portland a few weeks ago. Not sure if this afternoon will feature an official assembly of the Order of the Black Phoenix but there are sure to be some former Rock Bottom brewers presenting their beers.

For the evening tapping that kicks off at 7:00pm, APEX will host Love Fest that will feature New Belgium Brewing and a Pig Roast from Tastebud. There will definitely be some sour love during this evening! 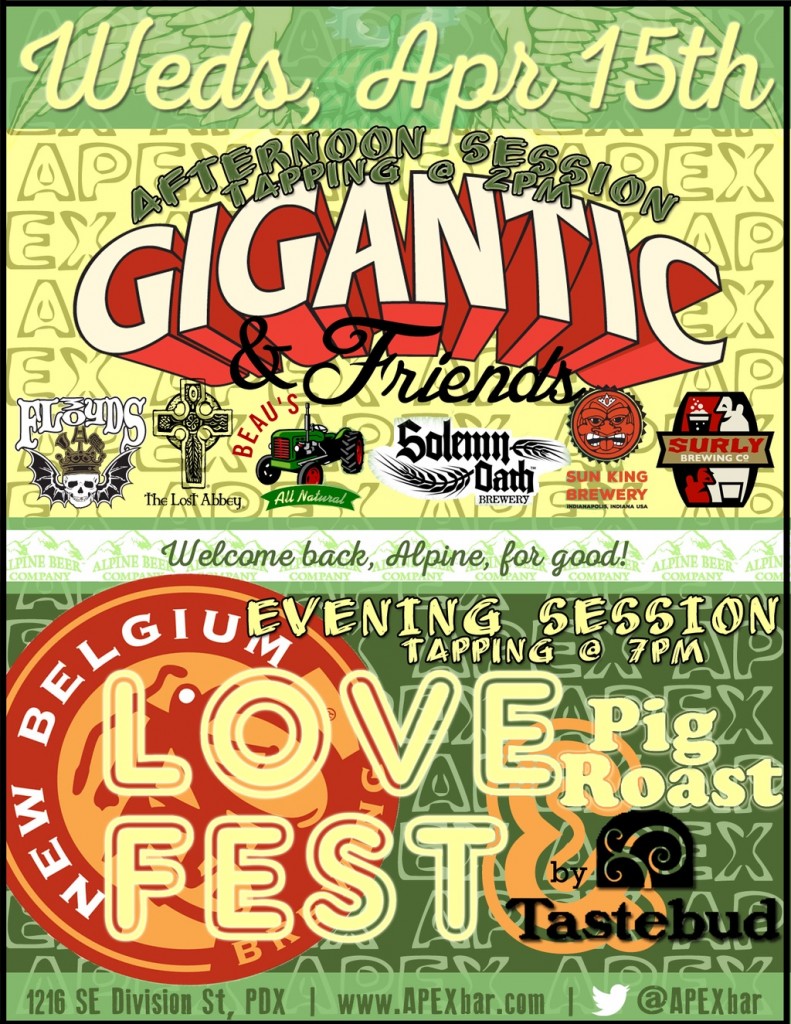 Day 3 – Thursday, April 16
With a portfolio that is so large, Shelton Brothers will have a second afternoon at APEX with taps flowing at 2:00pm. Be on the lookout for more rarities from this phenomenal importer.

For the evening tapping at 7:00pm, APEX will be bringing the sour beers to the forefront with Wicked Weed Brewing and The Rare Barrel. 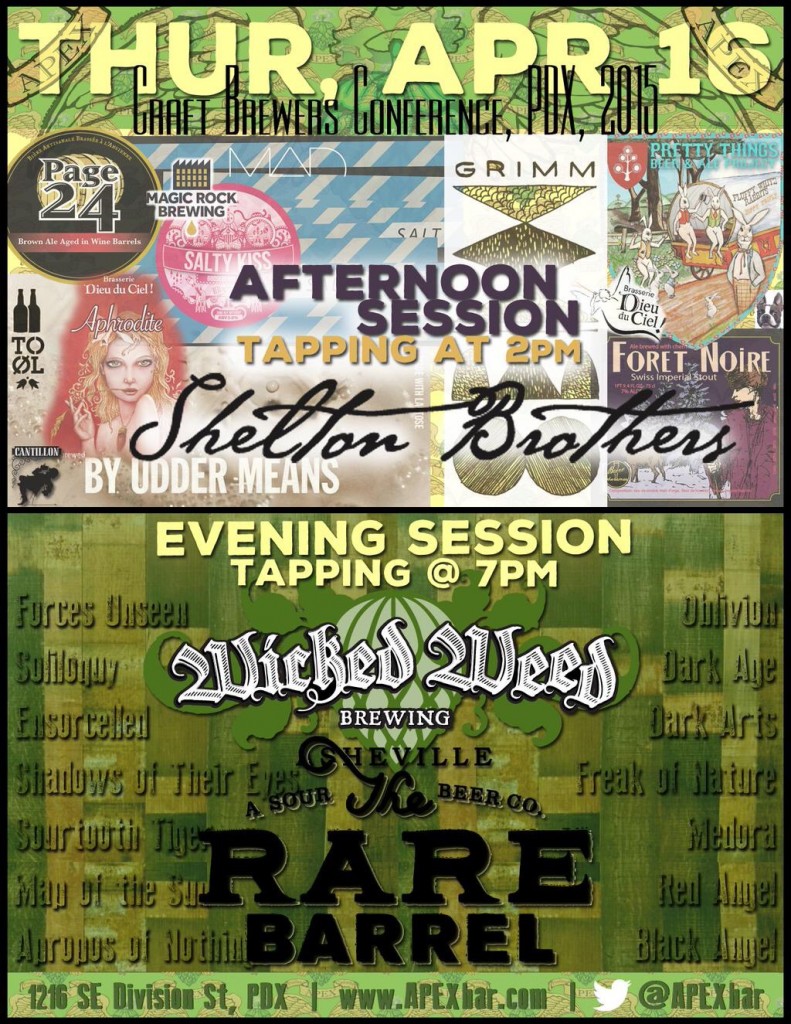 Day 4 – Friday, April 17
To properly close out CBC, on Friday APEX partners with the American Dwarf Hop Association’s breeding program to feature beers brewed with six unique hops. These hops include Azacca (ADHA483), Jarrylo (ADHA881), Pekko (ADHA871), ADHA527, ADHA529, and ADHA484. The American Dwarf Hop Association is a group from Moxee, WA that is dedicated to reinventing growing practices to adapt to the world in which we live.

Keep up to date by following APEX on Twitter or checking out its website. Also remember that cash is king at APEX.