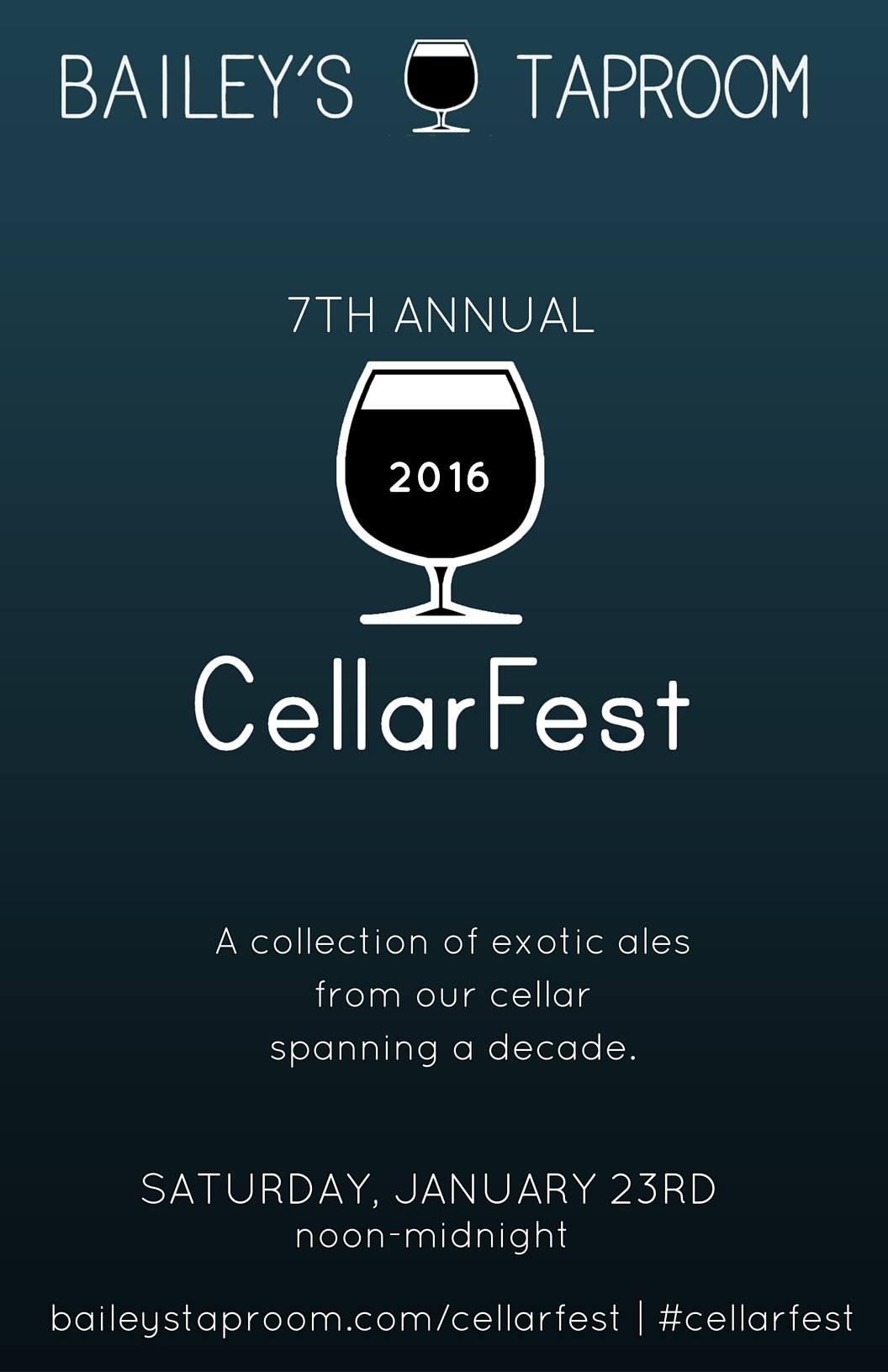 One way to welcome in the new year is with some big, bold beers when downtown Portland’s favorite beer bar, Bailey’s Taproom hosts its 7th Annual CellarFest. This year’s CellarFest will take place on Saturday, January 23 from Noon until Midnight with beers dating back to 2006. Admission will be free.

Here’s a sneak peek of what to expect at CellarFest 2016.

Alaskan 2006 Smoked Porter  ABV: 6.5%
Chewy, smoky, rich and roasty, Alaskan’s annual release is a treat for both dark beer lovers and fans of German rauchbiers. The process of smoking the malts prevents spoiling and preserves its robust character, helping it to evolve gently over time.

Anchor Our Special Ale 2009 (Anchor Christmas Ale)  ABV: 5.5%
Every year, Anchor releases its Christmas Ale, a Brown Ale base with a tweaked recipe and different tree needles and spices added to the mash. Ideal for aging and mellow maturation.

Caldera 2011 Old Growth  ABV: 8.8%
A dense and full-bodied Imperial Stout with black licorice that ages for an entire year before its release; we decided to hold onto it even longer.

Deschutes 2010 Streaking the Quad  ABV: 10%
This strong Belgian ale is amber in color and full of flavor. The fruity, slightly spicy aroma, enhanced with a subtle touch of bourbon, will leave you warm but thirsty for more.

Double Mountain 2012 Goliathon   ABV: 11%
A strong dark Belgian ale fermented with a yeast from Inglemunster in Belgium, along with a house yeast from Rochefort, Goliathon is a roasty, malty brew with fruit-forward overtones and just a hint of roasted bitterness.

Fish 2009 10 Squared  ABV: 10%
10 Squared is an intense barleywine with 10 different malts and 10 different hops, brewed to be bold and boozy at 10%. Aging helps mellow the alcoholic burn and cause the malt and hop flavors to intertwine around your tongue.

Flat Tail 2013 Wild 5 Black  ABV: 7%
An American Wild Ale fermented and aged on oak for a year. Pitch black with notes of licorice and roast complimenting the mouth-puckering sourness from a mixed fermentation with lacto, Brett b and c, and Kölsch yeast.

Fort George 2011 Bourbon Barrel Cavatica Stout  ABV: 9.9%
The classic Astoria stout has found a new home in barrels shipped all the way from Kentucky! The rich, dark base beer is the perfect medium through which bourbon can lend its magic, imparting flavors of oak, caramel and vanilla.

Full Sail 2011 Black Gold  ABV: 11.4%
This Imperial Stout was aged for about 10 months in Bourbon casks from Kentucky. The aging accentuates the robust character of the beer and brings out the depth of flavor from the bourbon, creating an elegantly sophisticated combination.

Great Divide 2009 Oak Espresso Yeti  ABV: 9.5%
This dense Imperial Stout was given a generous infusion of espresso to add yet another layer of complexity, combining with the vanilla oak character, intense roasty maltiness and bold hop profile.

Hales Ales 2010 Pikop Andropov’s Rushin Imperial Stout  ABV:  9.9%
Six different types of malts combine for a dense, chewy blend of espresso and chocolate flavors. Complimented by a complex hop profile, this is an Imperial Stout that lives up to its intense reputation.

Lagunitas 2011 Gnarlywine  ABV: 10.6%
It’s all crazy caramel and rich toffee in this bracing and bold American-style Barleywine. Each year’s version is dated and built to last for cellaring purposes.

Rogue 2011 Charlie 1981  ABV: 8.5%
Originally brewed and bottled for the 2001 Craft Brewers’ Conference in honor of legendary Homebrew icon Charlie Papazian. This unfiltered strong ale was such a hit, it was released to the public years after. A firm malt backbone forms the structure to hold a massive hop punch.

Admission is free, as Bailey’s will kick things off at Noon, and celebrate until close. Not down with basement beers? Bailey’s will have a couple of non-cellared brews available as well!