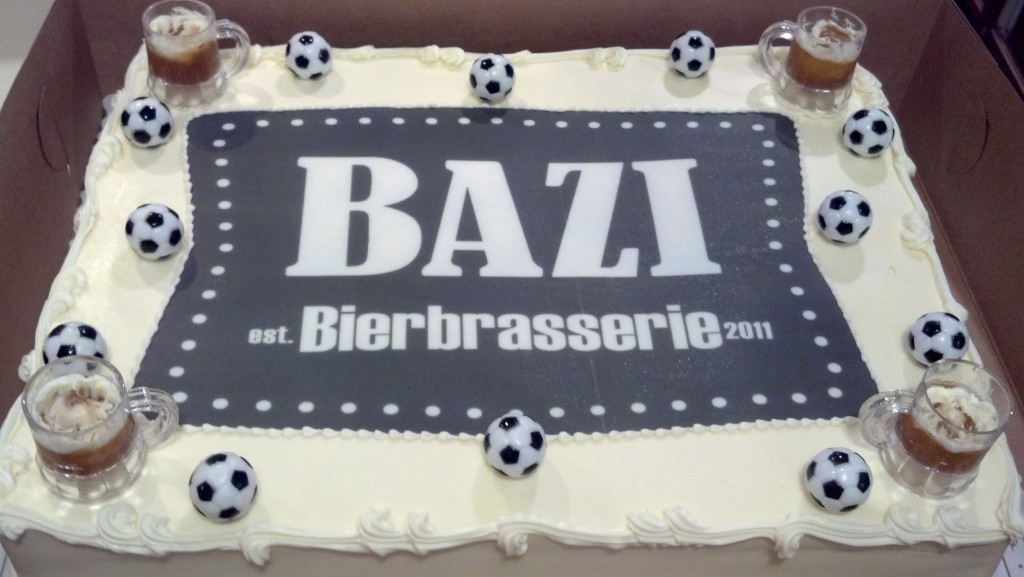 As we enter Memorial Day weekend later this week, Bazi Bierbrasserie will celebrate its Sixth Anniversary on Friday, May 26th from 5:00 to 11:00pm. There will be four special anniversary collaboration beers pouring alongside a few other tasty Belgian and Belgian inspired beers. Throughout the evening look for anniversary cake, games, and prizes.

For its sixth year Bazi is celebrating with four collaboration beers. In addition to these four beers Bazi’s staff have curated a draft list worthy of a celebration. The official Anniversary Toast and Cake will take place around 7:30pm.

Here are additional details on the collaboration and other anniversary beers that will be pouring on Friday.

Collaboration Beer Descriptions:
Upright & Bazi Sole Composition Quad, 2016 draft release: Brewed in collaboration with Hilda Stevens, Bazi’s owner, at Upright Brewing, and aged in port whiskey barrels for 3 months. This is the only opportunity to taste the draft version next to the bottle version.

Upright & Bazi Sole Composition Quad, 2017 bottle release: the quad collaboration which was bottled conditioned in 2016 and has been aging for the last year. This is a very small batch production and will only be available at Bazi for the anniversary celebration.

Deliria, 2017 bottle release: 8.5% ABV, brewed by Hilda and 14 other women at Huyghe Brewery in Melle, Belgium to mark International Women’s Day. A pleasant sparkling carbonate content produces a soft, full taste perception. The aroma is very balanced with a fruity, flowery background and initial Chardonnay impression which evolves into a spicy, mild aroma of hops. The taste is very full-bodied and is balanced with fruity tones of apple and Chardonnay grapes. Deliria has a fine, mild bitterness in its after taste and a splendid round feel in the mouth which evolves well. Bottles will be available for onsite enjoyment or to go.

The four-beer collaboration tasting tray will be available for $10 featuring 5 oz pours of each of the anniversary beers.

More: A Behind The Scenes Look At Brewing Deliria by Hilda Stevens.

Additional Beers With Descriptions:
Alesong Brett Mosaic Saison: 6.8% ABV, French-style saison fermented with a blend of Brettanomyces yeasts for a fruity and spicy experience. After aging, it was dry-hopped liberally with Mosaic hops to complement the ripe pineapple, mango, grapefruit, and rose-like flavors that evolved during the aging time in French oak barrels.

De Troch Private Domain LambicX, 2015 Vintage: 5.75% ABV, every Lambic with the Lambickx™ name is made from casks personally tasted and chosen by Don Feinberg, one of the ﬁrst importers of Belgian beer to America and founder of the ﬁrst Belgian-only brewery in the U.S. Don chooses his Lambics for their complexity, brilliance and drinking excellence both by themselves and as exquisite accompaniments to food.

Little Beast Bes Tart Wheat Ale: 6% ABV, flavored with chamomile, Belgian malts and noble hops this farmhouse wild ale is fermented with a blend of unique Saccharomyces yeast and conditioned with Lactobacillus. It’s a yeast forward flavor profile with some of the banana, clove you might find in more Bavarian beers but with a funkier, earthier bite and notes of pineapple, lemon and coconut.

Vicaris Tripel Gueuze: 7% ABV, mix of Vicaris Tripel and Boon lambic. Creamy white head billows above a honey-gold-colored beer. The nose has notes of tart vanilla and spice while a full body and long finish are perfectly balanced by the fine, dry gueuze.