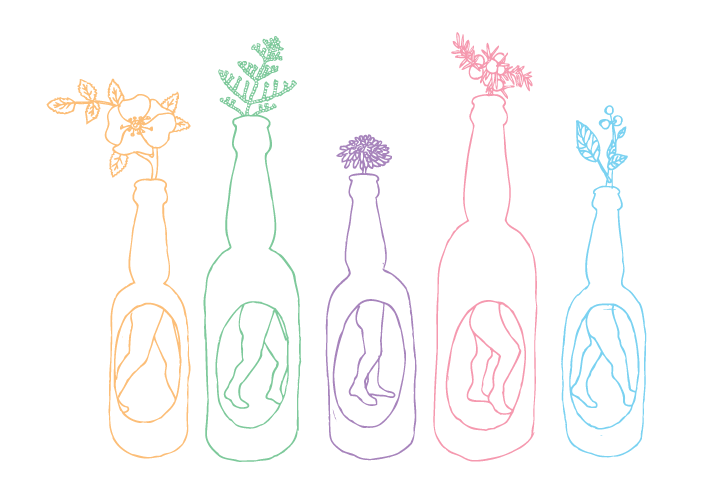 EUGENE, Ore. – Calling all locavores and beer lovers: the 2016 Beers Made by Walking event is nearly here! On Thursday, December 1st at 5pm, everyone’s invited to taste five special beers and a cider at The Bier Stein and the Tap & Growler. The fermented beverages will highlight local wild ingredients and reflect the influence of our watershed landscape on the creative minds of our local brewers.

For the second year running, the McKenzie River Trust hosted three summer walks on their protected lands for brewers to gather inspiration for a special beer. This year, The Bier Stein is joining forces with Eugene’s Tap & Growler to present the six fermented beverages brewed for this year’s Beers Made by Walking, dividing the beers between each location at 5pm on Thursday, December 1st. The participating businesses are Agrarian Ales, Claim 52, Falling Sky, Oakshire, and WildCraft Ciderworks. Plus, there will be free samples of a homebrewed beer! 100% of the proceeds from each BMBW beer tapped that day will be donated to the McKenzie River Trust, which helps people protect and care for the lands and rivers they cherish in western Oregon. Additional support for the event was provided by Ninkasi Brewing.

The walks took place on Green Island at the confluence of the Willamette and McKenzie rivers; the Hagen family’s Confluence Farm near Monroe; and the Andy Reasoner Wildlife Preserve in the Long Tom River watershed. Though the brewers are not permitted to harvest herbs from the protected properties, the professionally guided walks provide information about native, edible, and medicinal plants. The goal is to create a beer that reflects the land via creative choice of ingredients and/or production method.

Beers Made by Walking started out as a passion project by Eric Steen (now Marketing Manager for Hopworks Urban Brewery in Portland). He connected brewers in a region with a local environmental nonprofit, which organized walks for inspiration. The resulting beers were tapped all at once, giving people the opportunity to taste the brewers’ interpretations of the landscape. The program has been quite successful, with organized walks and fests in Portland, Seattle, Eugene, Corvallis, Raleigh, Bellingham and beyond, and an annual outdoor festival in Denver during the week of the Great American Beer Festival. Though Steen has mostly handed off organization roles to the nonprofits that host the walks, his idea has produced an incredible range of beers that would not have existed otherwise, including the award-winning Sagefight from Deschutes Brewery in Bend.

About the McKenzie River Trust:
The McKenzie River Trust is a nonprofit land trust with a mission to help people protect and care for the lands and rivers they cherish in western Oregon. Since 1989, we’ve acquired property and voluntary conservation easements to protect over 4,800 acres of clean, free-flowing rivers, plentiful salmon runs, and vibrant farms and forests that provide livelihoods and habitat. We envision a future in which conservation lands are at the core of community efforts to sustain clean water, abundant fish and wildlife, and diverse natural resource economies in western Oregon. Working with private willing landowners in eight different watersheds from the Cascade Mountains to the Pacific Ocean, we take on the responsibility of ensuring that the land and its conservation values will be protected forever. For more information, visit mckenzieriver.org

About Beers Made By Walking:
Beers Made By Walking is a program that invites people to step outside and see the place they live in a new light. Beers Made by Walking invites brewers to take nature walks and make beer inspired by the plants identified on the trail. Since 2011, they have worked with over 100 throughout the country to create over 150 place-based beers. Hiking and tasting events act as educational and fundraising programs for environmental organizations in the regions they serve.

About The Bier Stein:
The Bier Stein Bottleshop & Pub opened in July of 2005 as a small beer and sandwich shop. It quickly became a craft beer mecca in Eugene, and has been recognized as one of the best beer stores in the United States. In 2013, The Bier Stein relocated to a much larger space to accommodate more bottles, taps, and people. We strive to create a space where friends and fellow beer enthusiasts can gather and enjoy the widest selection of beer in Oregon under one roof. To see the live tap list, up-to-date bottle list, our delicious menu, events and more, visit thebierstein.com
1591 Willamette St. Eugene, OR 97401

About Tap & Growler:
Tap & Growler is a craft beer, cider, cocktail and wine taproom in the heart of Eugene. We offer eighty one taps of exceptional craft beverages and a delicious seasonal food menu from the Zingaro kitchen. With an award winning tap-list and a fantastic ambiance, we offer something for everyone! For tap-list, food menu, and further details visit TapAndGrowler.com
207 E. 5th Ave., Eugene, OR 97401