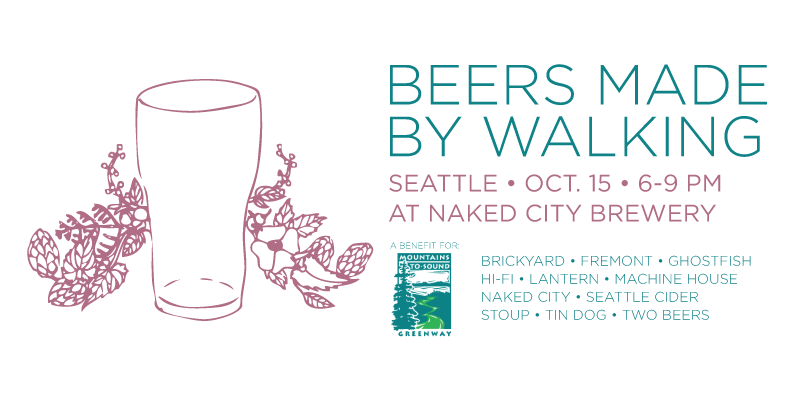 Beers Made By Walking (BMBW) is a program that invites brewers to go on nature hikes and make new beer inspired by plants that are identified on the trail. Today BMBW and the Mountains to Sound Greenway Trust (Greenway Trust) announce the release of eleven new beers/ciders that are inspired by hikes around the Greenway near Seattle. The beers will be served at a special tapping on October 15th, from 6-9pm, at Naked City Brewery in Seattle.

The featured beers/cider were produced through a collaboration between BMBW and the Greenway Trust after a series of public hikes, led by Greenway experts, with local brewers throughout the summer. Each brewery is donating their specialty beer for this event and a percentage of the the beer sales on October 15 will support the Mountains to Sound Greenway.

Each brewery will serve their new beer on October 15th at Naked City Brewery. Visitors will have the opportunity to meet some of the brewers, learn about the various hikes that inspired the beers, and learn about some of the Greenway Trust and BMBW’s recent work. Beers will be sold by the pint, or in samples, until they run out.

About Beers Made By Walking
Beers Made By Walking is a program that invites brewers to make beer inspired by nature hikes and urban walks. Since 2011, we have worked with over 100 breweries in six states to create place-based beers that support local, environmental organizations and causes. beersmadebywalking.com.

About Mountains to Sound Greenway:
The Mountains to Sound Greenway Trust leads and inspires action to conserve and enhance the landscape from Seattle across the Cascade Mountains to Central Washington, ensuring a long-term balance between people and nature and to preserve this heritage for future generations. The Greenway is an iconic 1.5 million-acre landscape that conserves a healthy and sustainable relationship between land and people by balancing built and natural environments. This landscape provides places for nature and wildlife, for outdoor recreation and education, for working forests and local agricultural production, while embracing vibrant urban areas with strong economies. mtsgreenway.org/