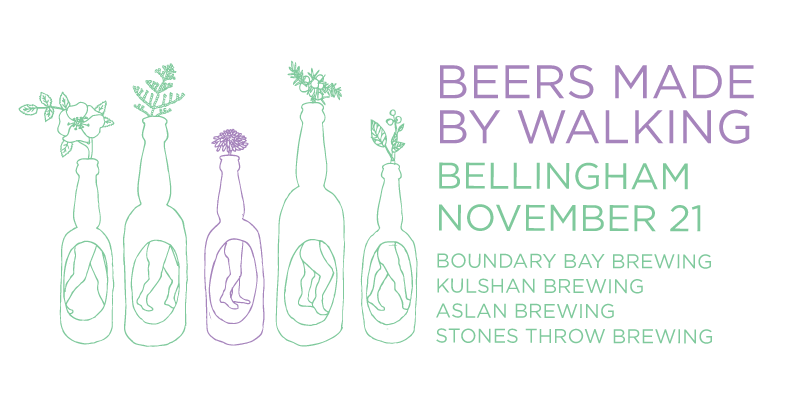 Beers Made By Walking (BMBW) and the Whatcom Land Trust (WLT) announce the release of four new beers that are inspired by hikes around the Pacific NW. BMBW is a program that invites brewers to go on nature hikes and make new beer inspired by plants that are identified on the trail. During weekend of November 21, each brewery will serve their place-based beer at their respective taproom. Beers will be sold throughout the weekend by the pint, until they run out. A majority of the proceeds from the tapping will benefit WLT.

Every  hike is unique and each beer that is produced is a unique, drinkable landscape portrait of the trail we hiked. These place-based beers were produced through a collaboration between BMBW and WLT after a series of public hikes, led by WLT, with local brewers throughout the summer. Participating brewers and that joined in on the hikes include: Aslan Brewing, Boundary Bay Brewery, Kulshan Brewing Company, and Stones Throw Brewing. Hikes took place at Canyon Lake Community Forest, Edfro Creek, and Stimpson Family Nature Reserve.

WHAT: Beers Made By Walking Bellingham Tapping

About Beers Made By Walking
Beers Made By Walking is a program that invites brewers to make beer inspired by nature hikes and urban walks. Since 2011, we have worked with over 100 breweries in six states to create place-based beers that support local, environmental organizations and causes. beersmadebywalking.com.